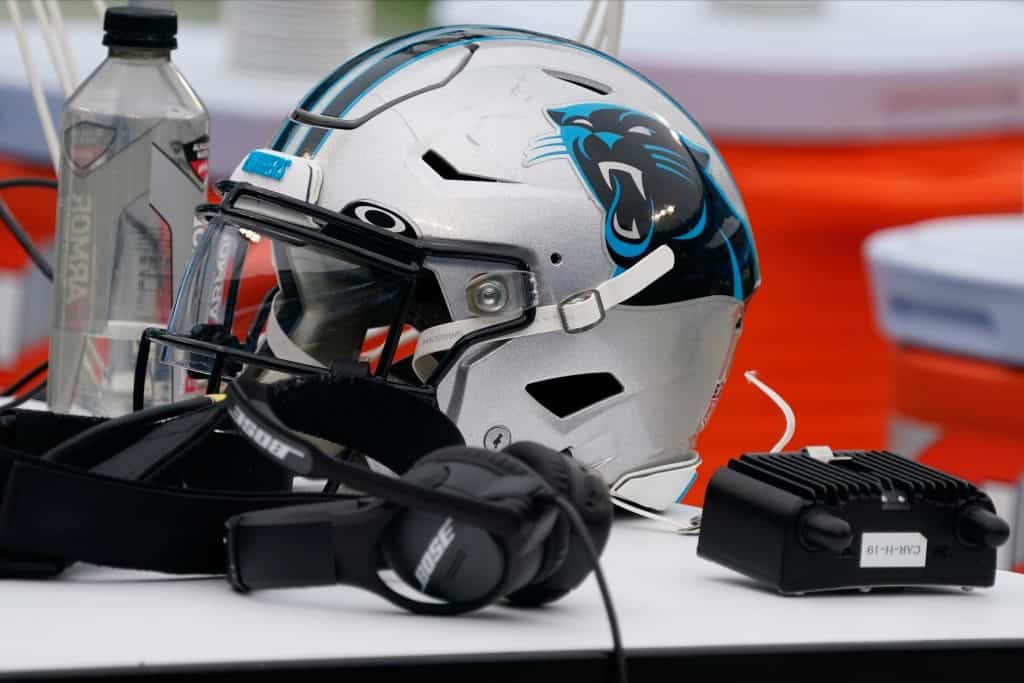 After an intriguing free-agency period, how does the latest 7-Round NFL Mock Draft for the Carolina Panthers shape up ahead of the 2021 NFL Draft? Does Carolina invest in a new QB in the first round, or does the trade for Sam Darnold change those plans?

The Panthers have a variety of options with the No. 8 overall selection in this 2021 7-Round Mock Draft. They could address several of their needs, or they could trade back and add extra picks. In this mock draft, they address their need on the offensive line.

With question marks surrounding who will start at left tackle, and Taylor Moton playing on the franchise tag, the Panthers have uncertainty long-term along their line. For that reason, if Penei Sewell is still on the board with the eighth overall selection, the Panthers should not hesitate.

Adding Sewell would give the Panthers a settled situation at left tackle. Given they just traded for Darnold, who has spent the majority of his career playing behind bad offensive lines, this seems like the ideal move at pick No. 8 for the Panthers.

If the Panthers are looking to invest in a quarterback here, North Dakota State’s Trey Lance would be an ideal option for them to develop. If Sewell is off the board, Rashawn Slater or Christian Darrisaw could be a logical option for the Panthers on their offensive line.

While the Panthers may pass up a quarterback in the first round, they still need to address concerns about the position. Darnold is an initial two-year experiment for the Panthers. In that time, Carolina needs to balance putting the pieces around Darnold to succeed, while also ensuring they are prepared if he does not.

Using a second-round selection on a quarterback may appear to be a weird way of doing that. However, Davis Mills offers the Panthers insurance, gives them a possible high-level backup, and a QB trade chip they can flip in the right situation.

Mills is proving to be a polarizing prospect heading into the 2021 NFL Draft. Some view Mills as a potential first-round selection. However, on Pauline’s latest big board, he ranks 76th overall and eighth at the position. In his scouting report, Pauline identified concerns surrounding Mills’ timing and his accuracy under pressure. Additionally, Mills is inexperienced, having started just 11 games in the last two years.

With all of that being said, Mills is a physically gifted prospect. He has the arm strength and size to succeed at the next level. Nevertheless, he needs to be coached well and in a good scheme. Joe Brady’s scheme took Joe Burrow from relative unknown to a superstar. Could he now do the same for either Darnold or Mills?

Carolina has intriguing pieces atop their depth chart at linebacker. Yet, there is a significant lack of depth to the group that needs to be addressed. The Panthers just signed Denzel Perryman on a two-year deal. His contract means he could be out of Carolina after 2021 if he struggles. Therefore, the Panthers would be wise to invest in a potential future starter like Pete Werner.

Werner is an athletic linebacker out of Ohio State who ranks 59th on Pauline’s latest big board. The weakness in his athletic profile is his weight and strength. Those concerns are apparent on tape as Werner can easily be disrupted from the action by blocks. However, his intensity and instincts are superb. Werner is a scheme-versatile, potential three-down linebacker, which is a valuable commodity in the third round.

The cornerback class of the 2021 NFL Draft is extremely deep. That is a bonus for the Panthers in this 7-Round 2021 Mock Draft as they pick up a potential future starter in Benjamin St-Juste at the position in the fourth round. With Donte Jackson and Rashaan Melvin set for free agency next offseason, Carolina hopes St-Juste can be a long-term partner for the newly acquired A.J. Bouye.

In his scouting report, Pauline describes St-Juste as a physical cornerback who slows receivers at the line. He still has areas to develop, but he has the talent to be a future starter on the outside for the Panthers.

The concern for the Panthers could be the short-term role St-Juste plays. He struggled last season playing on the inside. With this in mind, the Panthers may have to push him outside as a starter early in his career. Nevertheless, the former Michigan transfer has the talent to adapt if the need arises.

One area the Panthers absolutely need to address on their offense is tight end. Kyle Pitts is an intriguing option if he is still on the board in Round 1. Assuming Pitts is gone, though, the Panthers can wait for a TE contributor later in the draft.

Kenny Yeboah demonstrated in the 2020 season that he could be the complete package for a team at the tight end position. While his blocking lacks strength at times, he is effective for the large part. Yeboah is impressive in a pass-catching role, which combined with a solid blocking technique, gives him Day 3 appeal.

Still, he will need some work in the NFL to get his blocking polished. However, with the Panthers’ woeful tight end depth chart, Yeboah could have an opportunity to start as a rookie.

In 2020, rookie safety Jeremy Chinn stole the headlines on the Panthers’ defense, but they still need to add more depth at the safety position. Darrick Forrest may not be an immediate starter, but he could make an early impact in a dime role.

In his scouting report, Pauline highlighted concerns with Forrest’s long speed. On the other hand, he is effective at reading the plays and making tackles. In the sixth round, the Panthers will be hoping to get an immediate contributor on special teams who can develop into a starter down the road.

Rounding out this 2021 7-Round Mock Draft, the Panthers look to add a future weapon at wide receiver. Curtis Samuel departed in free agency, and Robby Anderson is in the final year of his deal. Additionally, the Panthers need more depth at the wide receiver position — something Austin Watkins Jr. can provide.

Watkins is another polarizing prospect, largely due to an unimpressive athletic profile. His lack of speed means he is not going to figure as a deep threat for the Panthers. He is, however, a relatively strong receiver who has demonstrated good hands. For that reason, Watkins has the potential to be a third or fourth receiver in this offense.