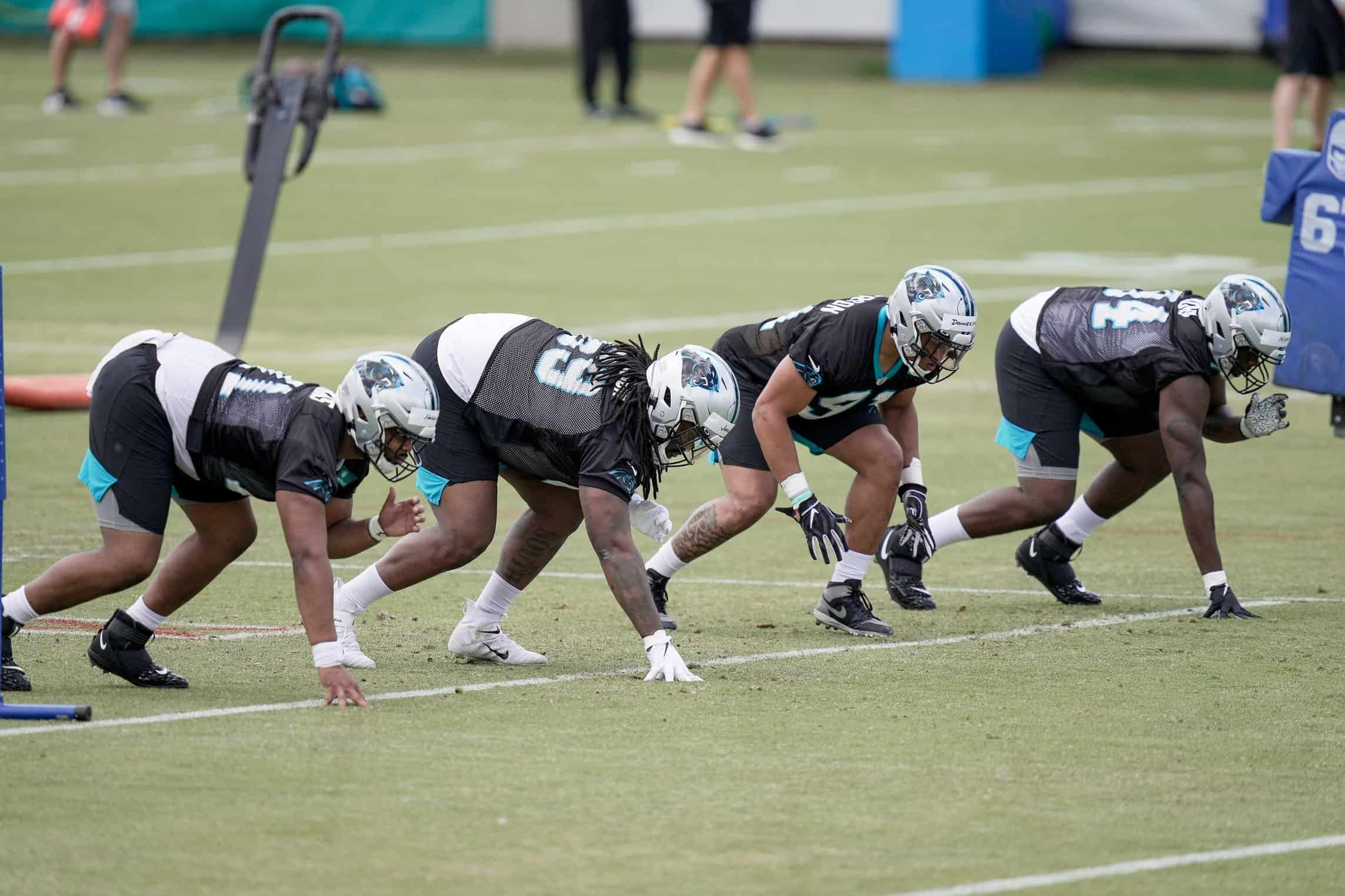 While still in the early phases of rebuilding their depth chart, the Carolina Panthers quickly built momentum under their new regime. Following a trade for a new quarterback and a successful NFL Draft, how does the Panthers’ depth chart shake out as they continue their evolution?

The Panthers added several new faces during the 2021 NFL Draft on both sides of the ball. For analysis regarding each position group on both offense and defense, scroll below the depth chart.

A year after they spent every single pick on defense, let’s examine the new-look Panthers offense.

After months of speculation, the Panthers completed a trade that will have a new QB sitting atop their depth chart — just not the one most fans were clamoring for all offseason. On April 5, Carolina completed a trade that sent a 2021 sixth, 2022 second, and a 2022 fourth-round pick to the New York Jets in exchange for Sam Darnold.

Like myself, many believe that Darnold needed a change of scenery. Playing under Matt Rhule and Joe Brady could be precisely what the exorcist ordered to get rid of those pesky ghosts that haunt him.

Their moves since acquiring him suggest a vote of confidence in Darnold. First, they traded away his main competition and 2020 starter Teddy Bridgewater to the Broncos. Second, and most importantly, they chose not to select a QB even though Justin Fields was still on the board. Also, they elected to pick up his fifth-year option, which will pay Darnold $18.85 million in 2022. The Panthers are riding with Darnold as the captain of their depth chart in 2021. It’s a bold strategy, Cotton. Let’s see how it plays out.

As if 2020 didn’t suck enough. Those of you who had the first overall pick in your fantasy football leagues likely got a swift kick in the nether regions last year as Christian McCaffrey missed the majority of the season. Trust me, I feel your pain on this. When on the field, McCaffrey is the best running back in the NFL, and he demonstrated it again last year in limited time. McCaffrey rushed 59 times for 225 yards and 5 touchdowns in just three games. He also saw 19 targets, catching 17 for 149 yards and another score.

With Mike Davis joining the Atlanta Falcons this offseason, the RB2 role on the Panthers’ depth chart was up for grabs.

Carolina addressed this position via the draft with speedster and former Heisman candidate Chuba Hubbard. The Oklahoma State Cowboy led the nation in rushing in 2019 but saw his draft stock fall in 2020 due to offensive struggles. He brings elite track speed that makes him an instant threat — defenses must respect anytime he steps onto the field.

Rodney Smith ended the 2020 season on a high note when he recorded his first career touchdown. Trenton Cannon is in the mix for potential touches but saw only 10 carries over his last two seasons combined. Reggie Bonnafon had 12 carries last season while appearing in two games.

One thing you will never hear out of me is D.J. Moore slander. I will head to the top of every water tower to defend his honor, and with Darnold under center, Moore can prove the detractors wrong. In three years, Moore compiled 208 receptions, 3,156 yards, and 10 total touchdowns. He is the only WR with back-to-back 1,200-total-yard seasons in the NFL since 2019.

Anytime you add a new QB, there is a period where players need to gel. That took place when Darnold and WR Robby Anderson were together on the New York Jets, and both should be on the same page from Day 1. Anderson totaled 102 catches for 1,531 yards and 11 TDs in 30 games played with Darnold.

With Curtis Samuel gone, the WR3 on the Panthers’ depth chart was up for grabs. Joe Brady and the Panthers tapped into a former player from his days at LSU in Terrace Marshall. He brings prototypical size (6’2″ and 205 pounds), fantastic speed, and a diverse route tree that can be used all over the field. In his sophomore and junior seasons combined, Marshall racked up 94 receptions for 1,402 yards and 23 touchdowns. He did so while playing third fiddle to Justin Jefferson and Ja’Marr Chase in 2019.

Former Seahawks WR David Moore signed with the Panthers in the offseason and will serve as the fourth option. Moore registered 35 catches for 417 yards and 6 touchdowns last year.

Carolina also added Shi Smith during the draft at pick No. 204. Smith was a productive WR while at South Carolina. As their top receiver in 2020, he led the team with 57 receptions, 633 yards (11.1 per), and 4 touchdowns across nine starts.

To say the tight end position is an afterthought in Carolina’s offense would be a slight understatement. In 2020, no team targeted the position less than Carolina. In total, only 7.8% (41) of the targets went towards tight ends.

That did not stop the Panthers from adding a likely new starter to their depth chart in Dan Arnold. Playing for the Arizona Cardinals, Arnold hauled in 31 catches for 438 yards (14.1 yards per catch) and 4 touchdowns.

Partially due to scheme and sitting behind Greg Olsen, Ian Thomas has yet to have a breakthrough in his career. Thomas made 17 starts over his three seasons, recording 72 receptions for 614 yards and 4 touchdowns. Given the scheme, it is unlikely to play a prominent role on the Panthers’ depth chart anytime soon.

Selected in the third round, Notre Dame’s Tommy Tremble adds depth at the position. For those in fantasy or dynasty, I would not be so quick to move him up your rankings given the draft capital investment. Tremble is likely to serve as more of an extension of the offensive line than a passing threat.

Cameron Erving signed with the Panthers during the offseason as the team looks to stabilize the offensive line. Since entering the league in 2015, Erving has played in 75 games with 47 starts. He played in 16 games once but never starting more than 13.

Starting every game since being drafted in 2017, Taylor Moton saw the Panthers place the franchise tag on him during the offseason. He allowed just 3 sacks on 1,057 snaps in 2020.

BYU’s Brady Christensen could end up the starting left tackle for the Panthers. Head Coach Matt Rhule has praised his skills during rookie minicamp, going so far as to say he has four-position versatility. The only knock on Christiansen is his length with 32 1/4 inch arms. A move inside to guard could happen just as easily.

Greg Little appeared in 10 games last season, starting three at left tackle. He ended the season on the IR with an ankle injury.

Brought in as a free agent, Pat Elflein started in 47 of his 50 career games for both the Minnesota Vikings and New York Jets. Elflein has experience at all three interior offensive line positions.

John Miller is back with the club for a second season. Miller made 14 starts last season after spending his first five years with the Bills and Bengals.

Deonte Brown might be the biggest human I have ever seen. That is also the concern with the sixth-round pick out of Alabama. He checked in at 344 pounds during Alabama’s Pro Day but was at 365 the week of the Reese’s Senior Bowl. He told reports at minicamp that he weighed in at 347 pounds. It’s worth remembering that the Panthers were coaches at the Senior Bowl — it could be they put the bug in his ear about needing to trim down. Lowering his weight is something that Rhule has stated Brown still needs to work on as the offseason progresses.

Matt Paradis restructured his contract to help the Panthers have more salary-cap space to redistribute amongst the other improvements to the depth chart. He has started every game in his first two seasons with Carolina.