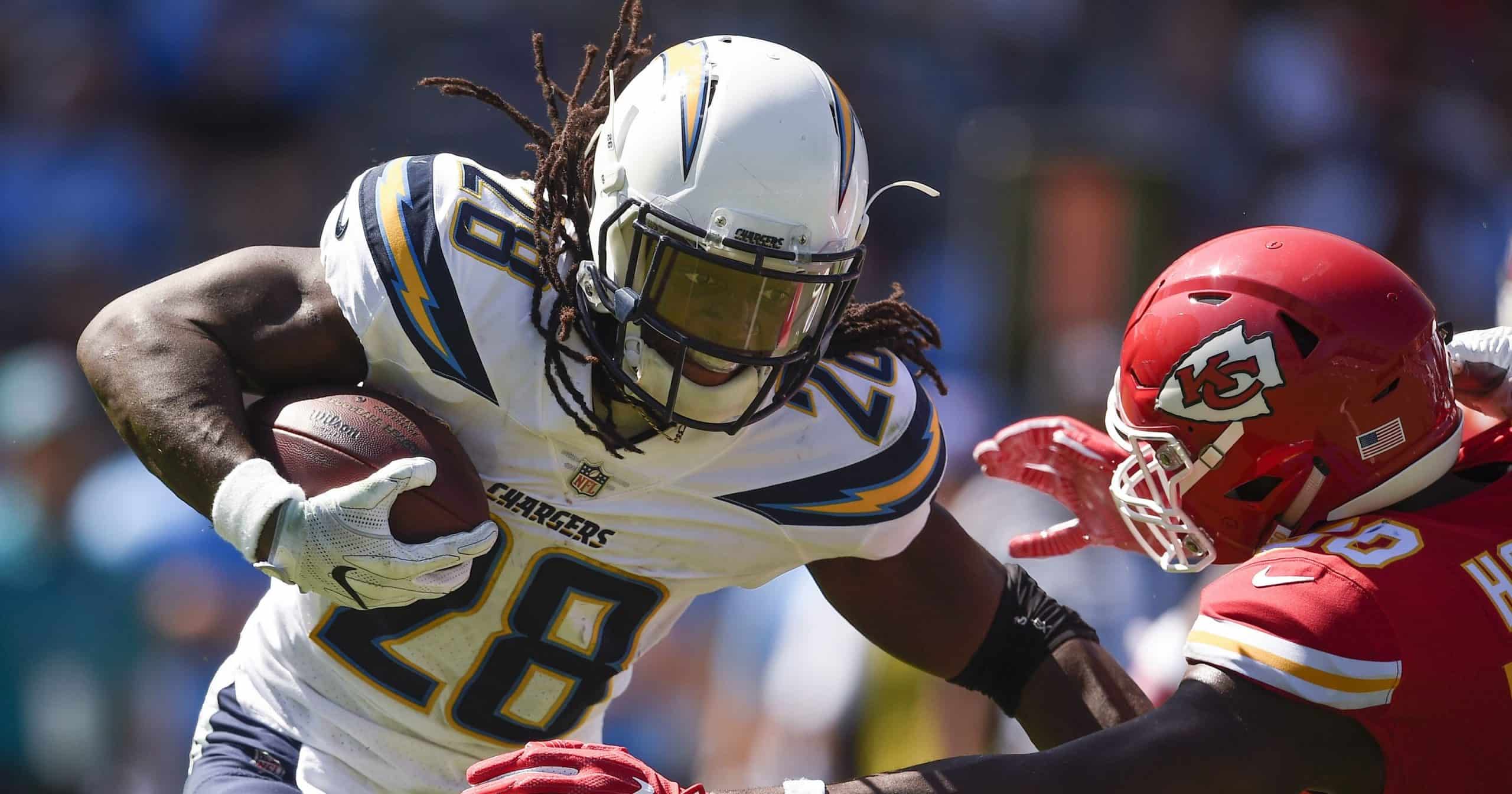 Image Source: USA Today Sports
What's in this article? Click to show
Melvin Gordon and the Offensive Share Metric
Gordon’s 2019 OSM grade improves as season unfolds
What to expect from Gordon in 2020

Things might get a little easier for Denver Broncos running back Phillip Lindsay this year. The Broncos front office added some strength to their running game during this past offseason by picking up veteran back Melvin Gordon from free agency. The vision? Bring in the long-time NFL vet to share the workload with Lindsay. On paper, this looks like a dream. By the end of the 2019 season, Gordon’s performance trends were headed in the right direction. But for Denver, this plan only works if the positive slope of individual production can continue into 2020.

Gordon’s OSM grades for the last few years have seen some unfortunate regression. Back in 2018, Gordon was one of the best running backs in the NFL, with an overall average of 17.31 — RB09 on the season. This was a monster year for Gordon: 10 touchdowns, 885 yards, and an average of 5.1 yards per attempt. And all of the hard work was rewarded with Gordon making his second Pro Bowl appearance at the end of the year.

Then things slowed down in 2019. Gordon ended the year with an overall OSM average grade of 10.80, nearly half the grade from the previous season. Out of 48 running backs that qualified for an overall OSM season grade, Gordon had one of the worst averages at RB39. For comparison, the top backs for OSM last year had average grades in the low-twenties.

Related | Matt Williamson’s RB Rankings: Which Broncos made the list?

The start of the 2019 season started shaky for Gordon’s production. For his first four games, which began in Week 5, Gordon averaged just 2.67 yards per attempt and recorded a combined total of only 112 yards. Before the bye week, he only had five games that he performed enough in to capture an OSM grade, even though he was on the field for nearly 61% of all the offensive snaps. Not a great look. 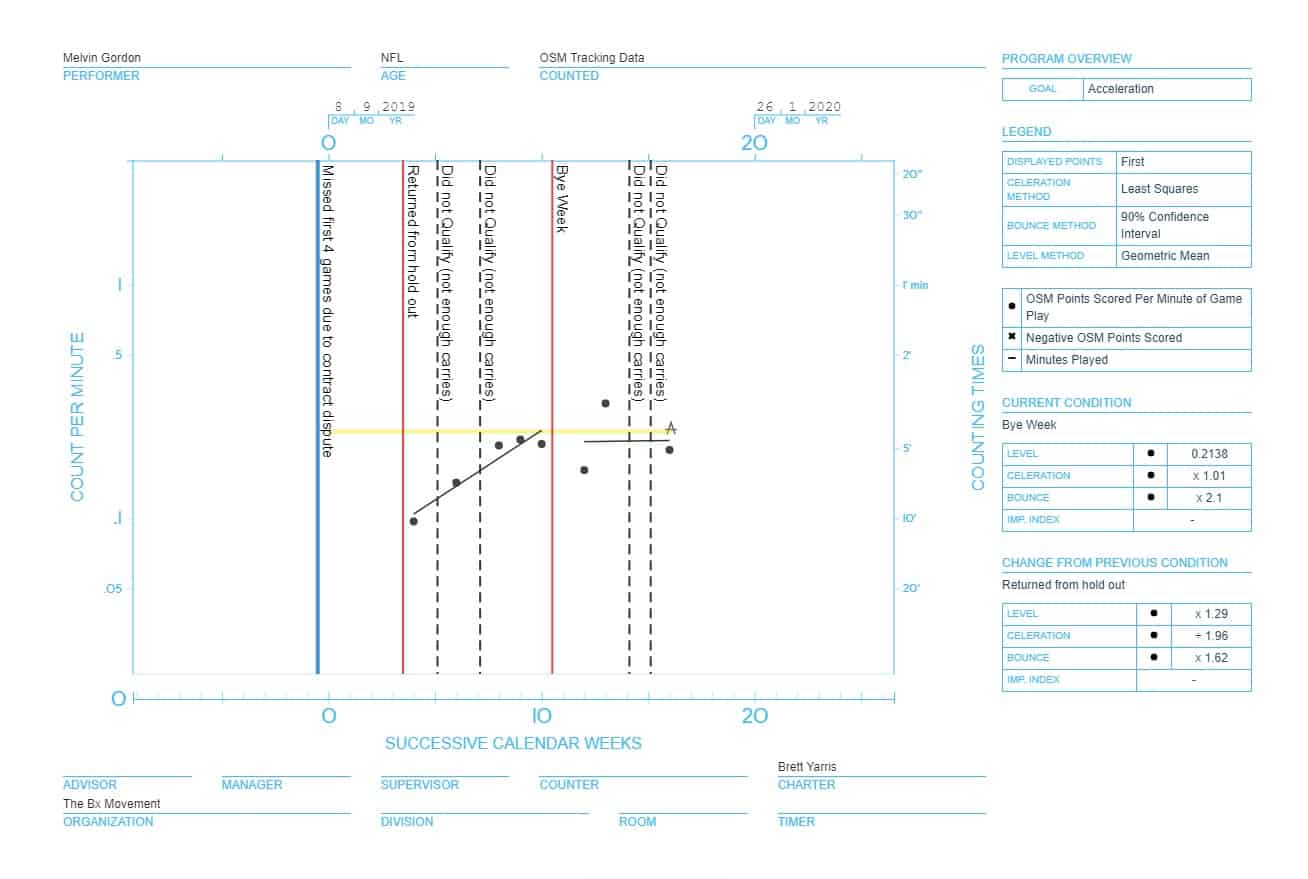 There is a silver lining for Denver. Because as poor as Gordon’s play was to start the year, it seems that he progressed nearly every game as the season went on. And not only was he getting better, but he was also consistently getting better at a fast pace. His bounce rate, the degree at which his performance trends change each week, was moving at x1.3 — this is incredibly consistent. As the weeks went by, he was accelerating his performance at a doubling rate.

The difference shows in his stats. Because as bad as his first four games were, his last four games of the year tell a different story. He was averaging just shy of 4.00 yards per carry, nearly twice the YPC from the beginning of the season, and had scored four touchdowns. And it wasn’t just on the ground that he was attacking either. In those last four games, Gordon also added 173 receiving yards to his stat sheet.

Gordon ended the year with 612 rushing yards and eight touchdowns, averaging 3.78 yards per attempt. He had 296 air yards as well as a receiving touchdown.

What to expect from Gordon in 2020

Phillip Lindsay is crushing it. He’s coming off back-to-back 1,000+ yard seasons for the Broncos. But he can’t be on the field all of the time – that’s part of being a running back. So the addition of Gordon to rotate in-and-out with Lindsay makes perfect sense for Denver. The play styles of the two differ enough to compliment each other nicely.

Gordon is the better ground-and-pound back and could be trusted more with those shorter “must-have yards” situations. Gordon also has the leg up with the better air yardage stats and can be used to switch up the passing offense.

Gordon’s efficiency rating for 2019 is fine. His EFF rating (the ability to move upfield versus running sideways) was 4.16. This was actually one of the better efficiency ratings across all NFL backs — the 12th best when stack ranked. Lindsay’s was slightly less at 4.01.

If Gordon can blast out of the gate strong and keep his momentum going, this could be a huge year for the Broncos. He’s proven year after year that he can play consistently and get better as the season progresses, which is an absolute must-have characteristic for sustaining a strong running game. Gordon showed us back in 2018 what he is capable of when he finds his groove early in the season. Lindsay alternating snaps with that Pro Bowl level Gordon is a scary combination for the rest of the AFC West.

Thoughts on this feature? Something you would like to see during the offseason? Follow me on Twitter or join in on the conversation on Facebook. You can also check out my other articles from 2019 and 2020 here.