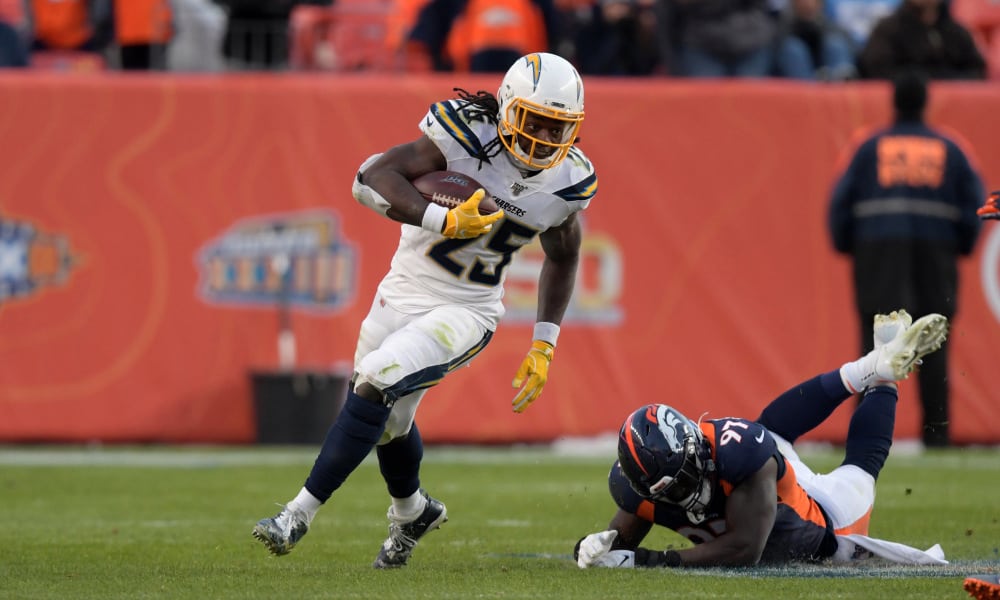 Former National Football League scout and ESPN analyst Matt Williamson recently joined the Pro Football Network family, and his first articles focused on who the NFL’s Top 25 rushers were. One member of the Denver Broncos was recognized in Williamson’s running back rankings, and it also happened to be the player who was brought in as one of the team’s key free-agent signings this off-season.

Was Melvin Gordon ranked too high or too low in Williamson’s running back rankings?

Gordon came in at 12 on Williamson’s list of the league’s top players at the RB position, just behind former Los Angeles Chargers teammate Austin Ekeler and last year’s touchdown leader Aaron Jones, and just ahead of Kareem Hunt and Chris Carson.

“With all respect to Phillip Lindsay, expect Gordon to take over Denver’s backfield,” Williamson wrote. “Gordon is a better receiver and better in protection than Lindsay and has shown the ability to handle a large workload. This is just a high quality all-around running back that could really aid in Drew Lock’s development at the quarterback position.”

How does Gordon compare to the players around him?

Considering both of the players ahead of Gordon, it’s hard to argue that he should be any higher in the rankings. Ekeler earned the starting job in the Chargers’ backfield after out-performing him head-to-head, and the rest of the top 10 is coming off much more impressive 2019 campaigns than Gordon had.

If anything, you could make an argument that Gordon doesn’t deserve to be as high as 12, especially considering Carson, James Conner, Leonard Fournette, Mark Ingram, Todd Gurley, Raheem Mostert, Marlon Mack, and Telvin Coleman all rank below him, yet produced a higher Offensive Share Metric (OSM) than Gordon in 2019.

Not only was Gordon’s OSM low for one of the NFL’s highest-paid running backs, but it continued the downward trend we’ve seen from his OSM since he entered the league, which doesn’t bode well for Denver’s backfield in 2020.

Why wasn’t Phillip Lindsay on the rankings?

The bigger Broncos-related takeaway from Williamson’s article was that his rankings didn’t include the team’s best rusher, Phillip Lindsay. Williamson not only ranked Gordon ahead of Lindsay, but he didn’t even include Lindsay among his top 25 RB’s.

Perhaps the fact that the salary cap difference between the two is just over $6 million suggests that Gordon is the favorite to be Denver’s workhorse, as Williamson pointed out. However, on the field, it’s hard to argue that Gordon is a more talented back than Lindsay. While Gordon out-performed Lindsay in 2018, according to OSM, Lindsay earned a better OSM score in 2019. In fact, both of Lindsay’s first two seasons in the league earned a higher OSM score than Gordon’s 2019 campaign.

Even if you believe that Gordon will be the starting RB for the Broncos in 2020, and therefore deserves to be ranked ahead of Lindsay, Lindsay still is worthy of a place on the list.

His overall 2019 OSM grade was higher than 10 of the 23 RBs (43.5%) on the list that had enough carries on the season to qualify for an overall OSM score. Lindsay is also one of just seven players to rush for 1,000 yards in each of the last two seasons and is the only one of those seven to be left off the list. Of the remaining six, five are ranked among the NFL’s top eight RBs by Williamson, and three are ranked as the first, second, and third-best RBs in the NFL.