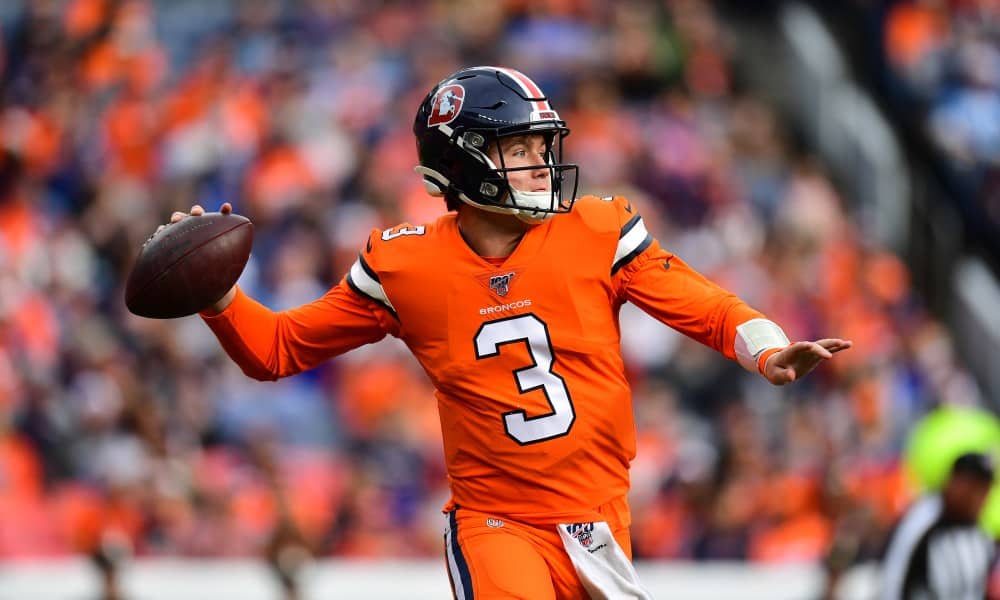 Dec 22, 2019; Denver, Colorado, USA; Denver Broncos quarterback Drew Lock (3) prepares to pass the ball in the first quarter against the Detroit Lions at Empower Field at Mile High. Mandatory Credit: Ron Chenoy-USA TODAY Sports
What's in this article? Click to show
Broncos’ starting quarterback in 2020 is clear cut
Who is expected to be the Broncos backup quarterback?
Which Broncos quarterback is on the outside looking in?

The Denver Broncos will enter 2020 with a strong idea about who will lead them at quarterback. The Broncos have three quarterbacks on the roster, and each player will have an important role from a positional standpoint this season. Not only do they have a cemented starter who has the potential to be the long-term answer at the position, but they also have a solid backup and a developmental prospect for the future.

For the first time since their 2015 Super Bowl campaign, the Broncos will enter the season with an unquestioned and unchallenged starting QB in Drew Lock, who has the potential to be elite. With that said, in order for the Broncos to emerge as contenders in the AFC, Lock’s development will have to take a significant step forward.

Can Drew Lock take the necessary leap this year?

In 2019, Lock only played in five games for the Broncos, but in those games, he did enough to convince Broncos Country, and more importantly the Broncos front office that he had the tools to become their QB of the future.

To expedite Lock’s development, general manager John Elway added a bevy of offensive talent, which included three wide receivers, a running back, two tight ends, and two starting offensive linemen. Those additions will make life much easier on Lock in 2020, but in order to make that developmental leap, he’ll have to correct some flaws in his own game.

Featured | Matt Williamson’s Running Back Rankings: Which Broncos made the list?

One of the more gleaming flaws Lock must correct is his footwork. Last season his footwork was problematic coming out of Missouri, and while it improved during Lock’s rookie season, it still requires some polishing. On film, he showed a tendency to drift to his left, even when it wasn’t necessary, and spent too much time on his tip-toes.

Those problems created extra pressures for Lock, and as a result, made his throws more difficult and forced him to get rid of the ball before the play had finished developing at various times. It also led to his accuracy taking a dip at times, but it’s an issue that should correct itself with more reps and experience. However, in order to become a contender, the Broncos will need those changes to take hold sooner rather than later.

The other part of Lock’s game that needs more progress is his ability to work inside an NFL-style offense. Last season, the Broncos let Lock operate in a very rudimentary offense that didn’t ask him to make many risky throws, to make things easier on him and help his development.

The leap from a simplified offense to offensive coordinator Pat Shurmur’s more complex scheme with a shortened off-season is a cause for concern. The lack of aggressiveness, on the other hand, shouldn’t worry Broncos Country. As a draft prospect, one of the knocks on Lock was that he was overly aggressive, so the fact that he was able to correct that in just one season with limited reps shows just how coachable Lock is.

Assuming he can continue to develop those facets of his game, Lock has all the ability and surrounding talent necessary to take a huge step forward, as the Broncos quarterback for 2020 and beyond.

Who is expected to be the Broncos backup quarterback?

The unfortunate reality of the backup QB role for the Broncos is that it hasn’t been a premium position for them in recent years. Since 2014, the Broncos have only had one season where they had one quarterback start all 16 games for them. They’re hoping that will be the case again, with Lock under center.

However, considering that Garett Bolles and Elijah Wilkinson are the favored prospects to start at tackle, it’s fair to wonder if that plan will come to fruition and if the Broncos should have targeted a better backup quarterback than Jeff Driskel.

Should the Broncos have invested in a better backup than Jeff Driskel?

With Brandon Allen’s contract expiring this off-season, the Broncos looked to upgrade at backup quarterback by bringing in the young, yet still experienced Jeff Driskel who previously played for the Detroit Lions. Driskel will likely serve as the Broncos insurance policy for Lock this upcoming season. Unfortunately, Denver then had to watch as more proven backups like Andy Dalton, Jameis Winston, and Blaine Gabbert all sign elsewhere for comparable amounts of money.

It makes sense why the Broncos wouldn’t want to sign someone like Winston who would potentially compete for a starting role, but adding a quarterback like Dalton would’ve given Lock the opportunity to learn with a proven veteran.

Despite those areas of concern, Driskel is an intriguing option in his own right. He’s already appeared in eight games as a reserve through his first two seasons in the league, which is valuable. He’s also shown some positive traits in those games, including a surprising level of mobility, but he plays with a very different style in comparison to Lock.

Driskel prefers to target check-downs and underneath receivers to slowly dink and dunk his way down the field, while Lock likes to test the intermediate parts of the field. That difference in style makes the decision to go with Driskel as Lock’s back up even more puzzling because, in theory, the offense would require a major transformation if Lock were to miss any time in 2020.

Which Broncos quarterback is on the outside looking in?

The Broncos are unlikely to carry more than three quarterbacks on their active roster, and it’s equally unlikely that Brett Rypien would challenge Driskel for their backup quarterback job. That said, Rypien still has an important role with this team moving forward, and should at least stick around on the practice squad.

Is Brett Rypien the backup of the future?

Of all the Broncos QB’s, it would be surprising if Rypien’s role was anything beyond the team’s practice squad, but it’s clear the organization still has a considerable amount of faith in him. When both Lock and Joe Flacco were injured last season, the Broncos elevated Rypien to the role of backup rather than signing a free agent off of the street.

If Rypien can continue to build off the flashes he demonstrated in last year’s preseason, he has the traits and the football intelligence to become the Broncos’ long-term insurance plan for Lock. Arm strength will always be somewhat of a concern with Rypien, but it isn’t crazy to think he’s already ahead of Driskel in that facet of the game.