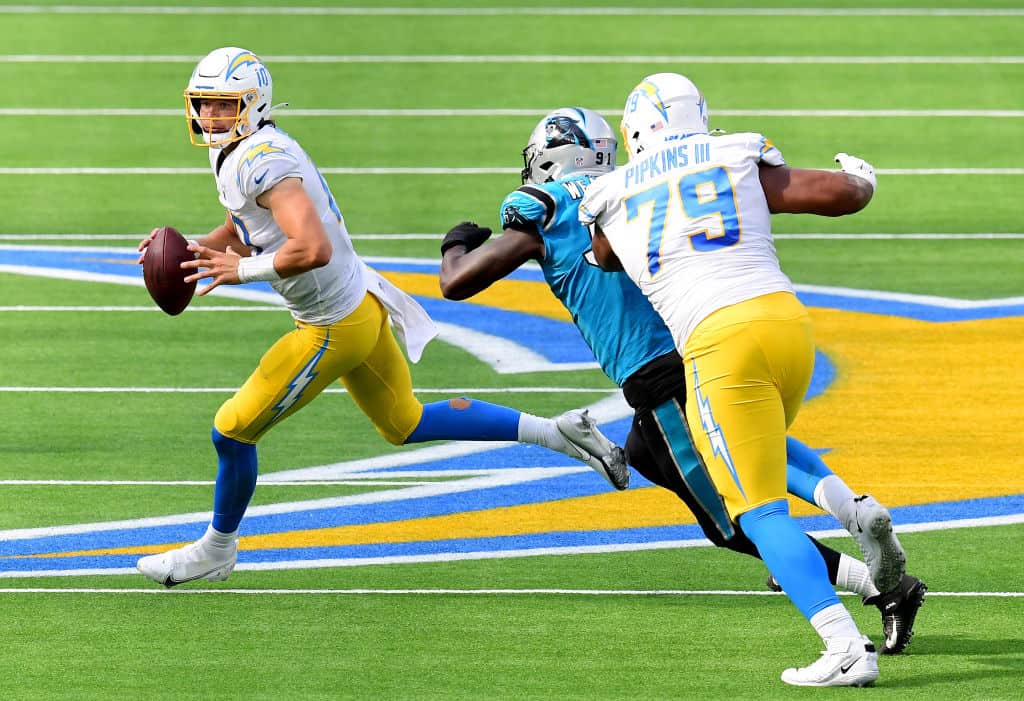 After one of the most forced quarterback controversies in recent memory, Los Angeles Chargers head coach Anthony Lynn officially named rookie Justin Herbert as the starter on Thursday. And now that he’s in the driver’s seat, should you start Justin Herbert in Week 5, and should you trust his fantasy football outlook for the remainder of the 2020 season?

The Chargers selected Herbert with the sixth pick of the 2020 NFL Draft, and questions quickly arose about when the team would give him an opportunity. On the one hand, the investment made it obvious that he’s the QB of the future and his physical tools are tantalizing. On the other, the coaching staff made it clear that veteran Tyrod Taylor, who spent 2019 backing up Philip Rivers, would begin the season as the starter.

Having ridden the bench in Week 1, Herbert was thrust into the starting lineup at the 11th hour following a team doctor’s botched attempt to administer a pain-killing injection. He looked as if he belonged, and it quickly became apparent that he was the most talented quarterback on the roster. But what does that mean for Herbert’s fantasy outlook in Week 5 and the rest of the 2020 season? Has that talent translated to fantasy success, and should you trust him moving forward?

Should Justin Herbert be the starting quarterback of the Los Angeles Chargers?

Yes. Absolutely. Despite finding out that he would be starting just minutes before the Week 2 game against the reigning Super Bowl champion Kansas City Chiefs, Herbert looked confident and composed. He completed 22 of 33 passes for one touchdown and one interception while also rushing four times for 18 yards and a touchdown. He followed it up with a middling performance in Week 3 before announcing himself to the world in style during a Week 4 duel with Tom Brady.

Related | Week 5 PPR Fantasy Picks: Who do I start, and who do I avoid?

Herbert’s athleticism allows him to avoid pressure, extend plays, and pick up yards with his legs. Plus, he’s already showcased the highlight-reel throws to justify his starting spot. He was expected to sit and learn the ropes but has shown that he’s ready to lead the team and make his mark on Los Angeles.

Should I start Justin Herbert in Week 5 in fantasy football?

Justin Herbert faces a New Orleans Saints defense in Week 5, which hasn’t been up to the standards of the season before. The Saints have allowed 11 touchdown passes in four games this year, with their lone interception coming against Matthew Stafford and a Detroit Lions team struggling to find their feet.

Herbert’s three-touchdown performance against the Tampa Bay Buccaneers in Week 4 was an indication of what the future might hold for the former quarterback of the Oregon Ducks, as he finished the week as the QB7 in standard scoring with 24 points. He’s the QB10 in average points this season and has the strong arm and athletic upside that can be a fantasy goldmine when it all comes together.

Related | Fantasy Trade Analyzer: Who should I trade for in fantasy football?

A negative game script for the Chargers is likely to force Herbert to throw the ball — as they are beginning the game as heavy underdogs — and that’s a position that he’ll relish, having averaged over 310 passing yards per game in his first three starts.

With Austin Ekeler sidelined by injury, Herbert could be forced to look deep to Keenan Allen, Hunter Henry, and Mike Williams. The Saints lead the league in defensive pass interference penalty yards allowed and, while that might not be perfect for fantasy points, it does a good job illustrating their fragility.

Is Justin Herbert a reliable streaming quarterback in Week 5?

If you’re streaming quarterbacks, then Herbert represents an intriguing option. He’s far safer than a player like Denver Broncos QB Drew Lock, who is returning from injury and stepping into the uncertain world of facing a team in the New England Patriots who have had a recent positive test.

Low upside options like Derek Carr, who is often forced to take a back seat to the Las Vegas Raiders running game, may represent more of a floor play due to the lack of risk in their game plan. But, Herbert has the potential to make a huge play every time he handles the ball.

In the end, whether you start Justin Herbert depends on what you’re looking for in your quarterback. If you want excitement and a high ceiling, then Herbert has the ability to win you the week in a potentially high-scoring game.

If you’re looking for a lesser player in a better situation, then you might be better off seeing if Carolina Panthers quarterback Teddy Bridgewater is available in the perfect matchup against an Atlanta Falcons defense, which has been unable to stop anybody.

What is Justin Herbert’s fantasy outlook for the rest of the season?

Barring anything unexpected, Herbert is going to be the starting quarterback of the Chargers for the foreseeable future. He’s overtaken Taylor on the depth chart, and the coaching staff will do everything that they can to ensure that he’s successful.

The Chargers’ schedule shouldn’t scare you, and there will be weeks, such as those against the Miami Dolphins and Atlanta Falcons, that Herbert will likely be in high demand on your waiver wire if he isn’t on a team.

Rookie quarterbacks can often take time to get acclimatized to the league, but he looks to be taking everything in his stride, which is good news for Justin Herbert’s fantasy outlook. The Chargers are 1-3 and know that they need to score points if they’re to have any hope of making a playoff push. Herbert’s chemistry with his talented receiver group should continue to develop, and the coaching staff will be tailoring their offense to his strengths.

It may not always be easy sailing, but he’s capable of making throws that few outside of Patrick Mahomes and Aaron Rodgers can. And if you know that, then it won’t be long until the rest of your league does too.

In this article:Justin Herbert, Top Stories