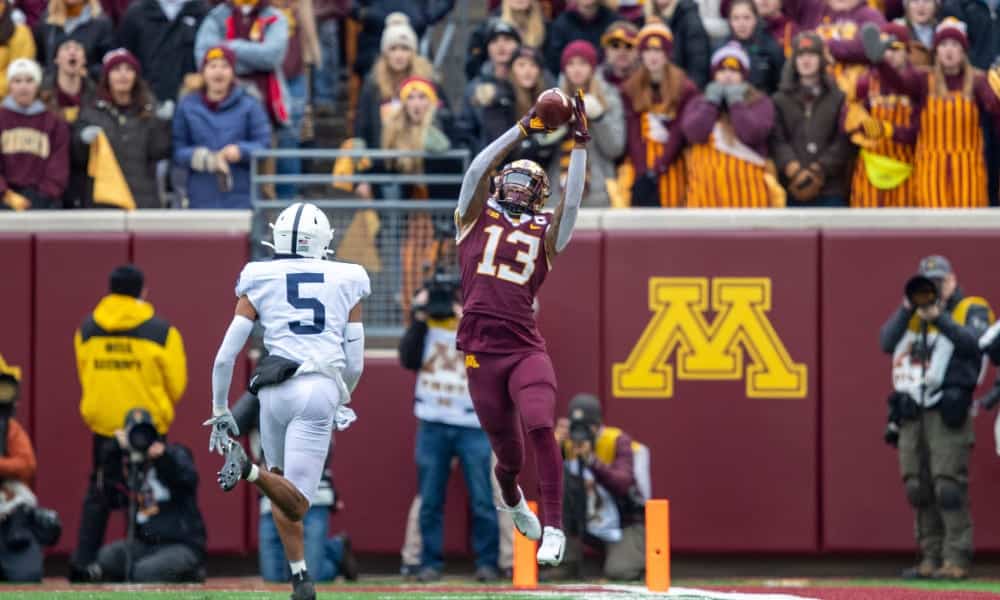 Photo Credit: Jesse Johnson-USA TODAY Sports
What's in this article? Click to show
Things look different under the microscope
Is Rashod Bateman a CeeDee Lamb clone?
Bateman is savvy beyond his years

I don’t like doing player comparisons. Making comparisons to NFL players is nearly impossible. Most people enjoy having the ability to look at a name, see another name, and immediately be able to put the two together and get a picture in their mind. Admittedly, the exercise is great for the general football fan. However, comps are messy because no two players are the same. But as I watched Tanner Morgan for my series on ball placement charting, I felt I had a decent Rashod Bateman comp.

Things look different under the microscope

What had happened stems from what I consider “flash scouting.” Flash scouting is basing a ground-level opinion on a player based on the flashes you see from viewing live games or watching other prospects in their game. Sometimes flash scouting works out and the player lives up to those flashes.

An example of that would be Minnesota Golden Gopher teammate Antoine Winfield Jr., who flashed like fireworks on the Fourth of July when I first saw him during the Maryland game. The rest of his tape supplemented those flashes and he received a first-round grade from me.

While watching Morgan I thought I saw shades of CeeDee Lamb in Bateman. Like Lamb, Bateman was the big-play threat for his football team and has WR1 upside. He averaged 20.3 yards-per-catch on 60 catches in 2019 with 11 touchdowns to Lamb’s 21.4 ypc on 62 catches with 14 touchdowns.

They both possess outstanding hands that allow quarterbacks to be less than precise while still completing catches. That ability is all-around and is why the flashes reminded me of Lamb. Bateman makes plays through defenders, overtop of defenders, going to the turf around defenders, and along the sidelines with defenders draped over him. They just both catch almost everything that they can get their mitts on.

But he just doesn’t move the way that Lamb did coming out of Oklahoma. Lamb had more start/stop ability when it came to breaking 90-plus degrees. He sank more efficiently and got in and out of those routes with more juice, creating more natural separation in those instances. At full chap, Bateman juice doesn’t have the brakes to consistently get open on deep outs and comebacks.

The above video shows the big difference between Lamb and Bateman. Here, Bateman is running a blaze out, which is a double move compromised of a 10-12 yard post as the initial game, but on the third step of the inward 45-degree break instead of continuing, Bateman puts the left foot in the turf to bend it as quickly as he can back out toward the sideline. This is a good route to use as a general barometer for what a receiver can be as a route runner and as an athlete because of everything that goes into it.

Why the blaze out is a good route running barometer

The receiver must be able to do a lot of different things on one repetition. They have to fire off and first try to sell vertically against off coverage like Penn State is playing. For Bateman, selling inside is big here because of how often Minnesota runs that intermediate in-breaking route on RPOs.

Bateman runs a fine route here, but he gets open because he’s savvy and sells the in-breaking RPO. Those hips just aren’t quite as loose as a guy like Lamb. But that makes a bit of sense because he is built a bit more solidly than Lamb overall. He’s just not as fluid in his lower half.

He’s part Lamb but not enough to feel great about. So, who is Bateman?

We’ve seen this sort of deception before with Bateman in the previous video. Although Bateman isn’t the blocker Lamb is, he does an admirable job on the outside displaying good effort and enough strength to be a plus blocker. Morgan does a good job selling the pump with a good shoulder roll and delivers a good ball, and Bateman is patient enough to get the cornerback sleeping long enough to get steps on him.

Bateman is savvy beyond his years

Here, he does a great job to sell the slant late by flashing his eyes back to the quarterback as he plants and relocates his eyes to swim by an overly-aggressive corner breaking inside on the slant.

This final video cemented his comparison. After this play, it was easy to see throughout the rest of the plays who he is as a player. Bateman wins on big-time plays like this often. He’s a double move savant. He’s not overly agile and he doesn’t possess a Tyreek Hill amount of long speed or Jerry Jeudy‘s feet.

But despite all of that, he’s able to get open consistently.  He’s savvy and detail-oriented in non-traditional ways, particularly using his eyes and blind spots to get massive amounts of separation both upon release and late in routes.

Thread on why Keenan Allen is a top 5 route runner in the NFL: pic.twitter.com/F3vbvA5Bl2

His comp is Keenan Allen. And even in what’s believed to be a very good wide receiver group for 2021, you’ll take a Keenan Allen type all the way toward the top.