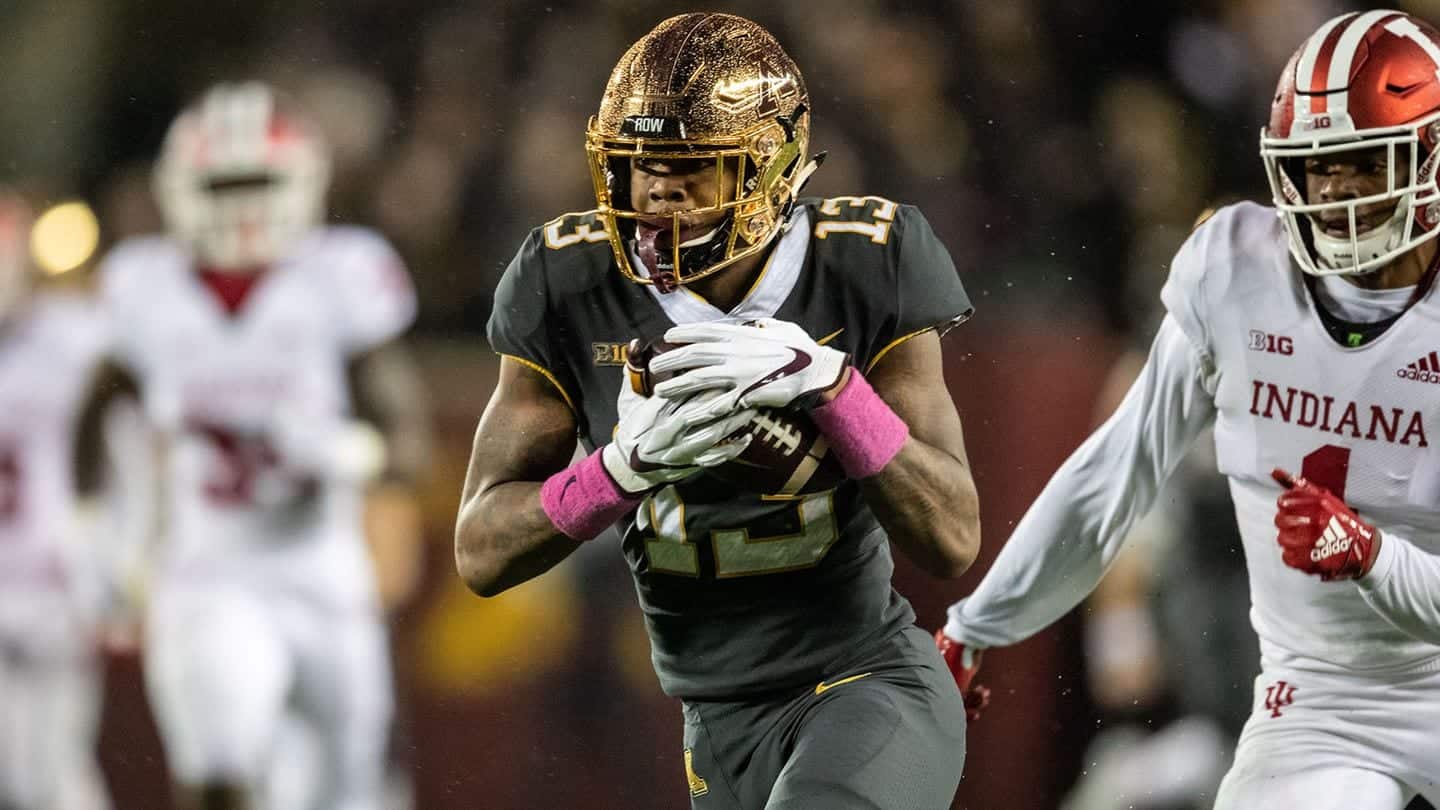 The Minnesota Golden Gophers were one of the surprise teams in 2019, not only in the Big Ten but in all of college football. The team finished 11-2 overall under third-year coach P.J. Fleck and looked like a legitimate title contender behind a great defense and an upstart offense. Quarterback Tanner Morgan and wide receivers Tyler Johnson and Rashod Bateman put up prolific numbers in 2019. With Johnson off to the NFL, Bateman will step into the number one receiver role and could be in line for a massive season in 2020.

Below I will focus on the rising soon-to-be junior receiver from Tifton, Georgia, and break down what sets him apart from the other receivers that could be available for the 2021 NFL Draft. Bateman has grown by leaps and bounds during his two seasons with Minnesota, and the best could be on the horizon. Bateman is an extraordinary player for the Golden Gophers and could be a real dark horse to become the first wide receiver off the board in 2021.

From Tifton to the top

Bateman was a prolific wide receiver prospect even before he ever stepped foot on the field at TCF Bank Stadium. During his senior season at Tift County High School, Bateman broke the school’s single-season school receiving record, posting 83 catches for 1,539 yards and 21 touchdowns. Bateman was a first-team All-State selection for football, and he also lettered in basketball, which shows in his ability to go up and get the ball to make contested catches.

That ability to make tough catches earned Bateman a scholarship to play at the University of Minnesota, and he would capitalize immediately. During Bateman’s true freshman season in Minneapolis, he started all 13 games and set school freshman records in receptions and receiving yards. That season, Bateman accumulated 51 catches for 704 yards and six scores. He proved to be a surprisingly consistent and big-play target for Minnesota’s duo of quarterbacks Tanner Morgan and Zack Annexstad.

During Bateman’s sophomore campaign in 2019, he rose to even greater and more spectacular heights. He proved to be one of the more electric and sure-handed receivers in all of the Big Ten, and went on to be named Richter–Howard Big Ten receiver of the year. This magical season saw Bateman shred defenses to the tune of 60 catches for 1,219 yards and 11 touchdowns. His 20.3 yards per catch ranked second in the Big Ten and eighth overall in the country. He was named first-team All-Big Ten and Third Team All-American, despite playing the number two role behind the senior, Johnson.

As mentioned above, Tyler Johnson paced Minnesota as the number one receiver last season with 86 catches for 1,318 yards and 13 touchdowns. Johnson was a two-time All-Big Ten first-team selection, but now he’s off to the NFL and looks to be a day two pick in April. Therefore, Bateman steps to the forefront of this Minnesota offense and looks primed as one of the best wide receivers and draft-eligible players in the entire Big Ten conference.

After spending some time watching some Golden Gopher games last season and focusing on Tyler Johnson and running back Rodney Smith, Bateman is a player that continued to flash in a big way. At 6’2, 210 pounds, he is a big receiver with excellent hands, body control, and concentration. Take a look at a great example below of that laser focus on this big catch against Purdue last season.

Is there anything Rashod Bateman can’t catch? pic.twitter.com/I2i6DKmTqS

During his first two collegiate seasons, he consistently made one-handed grabs and contested catches look easy. He has strong hands, and it almost seems as if the ball sticks to his hands at times. Bateman will undoubtedly receive more attention from defenses as the primary focus of the Minnesota offense in 2020.

Bateman looks ready to accept that role and continues to grow into one of the 2021 NFL Draft’s rising star prospects. Gopher’s coach P.J. Fleck recently commented on the dynamic between his top receivers from 2019 and Bateman’s ability to grow into the number one role. Bateman is now the “Batman” and leader of the Minnesota passing offense following Johnson’s departure. In addition, PFN’s own Matt Valdovinos recently listed Bateman among his top-10 2021 NFL Draft Prospects in the Big Ten for the 2020 season. The Minnesota junior-to-be came in at number four overall, and Valdovinos mentions that Bateman is a “true alpha receiver.”

The Minnesota playmaker will get a chance to showcase that this season against a challenging Big Ten schedule that features a Justin Fields-led Ohio State squad that made the College Football Playoff last season. With Bateman’s help, Minnesota will look to bounce Ohio State and earn a spot in the 2021 College Football Playoff. If history is any indication, Bateman tends to shine the brightest when he is needed the most. His two most significant games in 2019, came against Minnesota’s highest-ranked opponents, Wisconsin and Penn State. Bateman amassed a staggering 13 catches for 350 yards and two scores in those two contests alone.

For comparison’s sake, Bateman features a mixture of former LSU receiving greats Jarvis Landry and Odell Beckham Jr. in his game. Both receivers show exceptional concentration with the ball in the air, coupled with strong and dependable hands. Bateman also shows deceptive long speed and after-the-catch ability. He doesn’t appear to have elite speed but is continually running away and separating from defenders to make the catch. All of these great traits translate to Bateman becoming a first-round pick following the 2020 college football season. He could be selected as early as the top-15, with an outside chance at being the top wide receiver prospect off of the board.