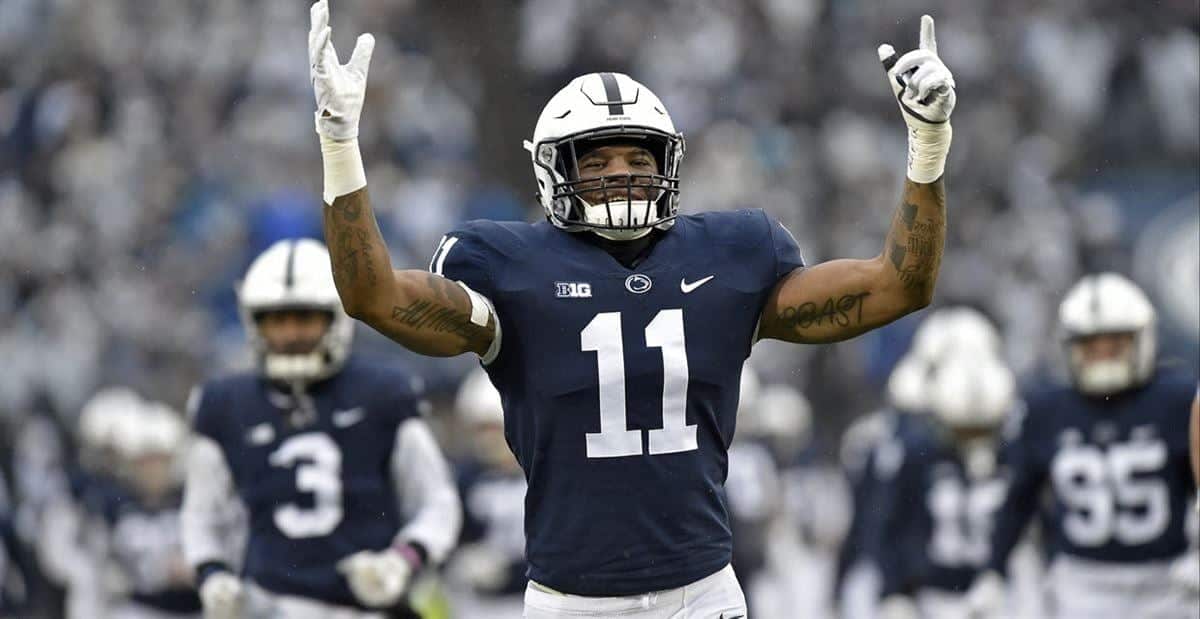 If. It’s a small, insignificant word, and yet so, so powerful. With one utter of the word, one can suspend reality itself, and project into an uncertain future. Such is the case with the 2021 NFL Draft. We want to talk about it. We ultimately have to talk about it. But we can’t — at least not without “if”. This 3-round 2021 NFL mock draft cherishes the trepidatious two-letter word, because with so much time lying between us and next April, “if” is honestly all we got.

Note: The draft order for the PFN 2021 Mock Simulator was used for this mock draft.

We’re suitably starting off with a massive “if”. What if Trevor Lawrence is toppled as the number one pick? He’s has been the presumptive first pick in every 2021 mock draft so far and for good reason. Lawrence has an excellent pallet of traits and has gone 29-1 in his first two seasons. But as much as his hype might drown out other names, Lawrence has challengers, namely North Dakota State QB Trey Lance.

Lance has the athletic talent and arm to be a top pick, similar to former Bison QB Carson Wentz in 2016, and Lance also achieved rare ball placement proficiency in PFN Analyst Dalton Miller’s charting exercise. If he can make an example of Oregon early in 2020, he can put himself into #1 overall conversation.

There are less “ifs” for the Bengals in 2020, who have their franchise quarterback and presumably a new priority to protect and equip him with everything he needs to succeed. After the 2020 season, what he needs will probably be an offensive tackle who isn’t Bobby Hart.

With 2019 first-round pick Jonah Williams coming back from injury and Hart failing to inspire, it makes sense for the Bengals to grab Penei Sewell. Protecting the franchise quarterback is paramount to success, and Sewell is essentially sure thing as a blocker.

Knowing how young and unproven Washington’s roster is compared to the rest of the NFL, it’s easy to expect them to be picking in the top five again. However, early inferences are that they’ll pick a quarterback if they’re selecting this early, and factors are falling in Dwayne Haskins’ favor before the season.

The team as a whole might not be competitive, but Haskins, who’s just 23, can still earn Ron Rivera’s long-term confidence, even amidst struggles. And if he does, look for the Redskins to seriously consider the draft’s premier linebacker talent: Micah Parsons. With this selection, Washington would have an all-around near-elite defensive unit.

Teddy Bridgewater did well for the Saints in limited action in 2020, and he’ll have a talented supporting cast in Carolina. But the offensive line discrepancy between New Orleans and Carolina is a big one, especially after the latter traded away Pro Bowl guard Trai Turner to the Chargers.

Bridgewater may be efficient, but franchises need quarterbacks who can elevate their teams. Bridgewater might not necessarily be that caliber of a signal-caller. Lawrence, however, certainly has all of that upside, and the Panthers should take this chance.

Ja’Marr Chase is the most popular pick to be the preseason number one at the wide receiver position, but some draft analysts, including Pro Football Network’s Matthew Valdovinos, have strayed from that ideology. Valdovinos instead champions Rondale Moore as his top pass-catcher, citing Moore’s elite athleticism and versatility.

Moore is a bit undersized at just 5-foot-9, 180 pounds, but he’s an absolute game-breaker every time he takes the field, and his speed, dynamism, and ability to line up anywhere will undoubtedly open up the field for DeVante Parker and Preston Williams.

At this point, this pick elicits a lukewarm reaction from me. Gregory Rousseau still has some problems- mainly his hand usage and relative torso stiffness- to remedy before he’s a bonafide top pick. However, he still brings a very good athletic foundation for his 6-foot-6, 260-pound frame, and he’ll provide a ton of versatility for the Jets’ 3-4 scheme.

The Jets have shown a preference for productive defensive linemen in the past, and while Rousseau still needs some development, he has all the potential needed to leap into the top 10.

The stat line is just so pretty, we have to bring it up every time we mention Ja’Marr Chase. In 2020, while catching passes from Joe Burrow, Chase logged 1,780 yards and 20 touchdowns on 84 catches, good for an astounding average yards per catch of 21.2. Those are freshman-difficulty NCAA Football 14 numbers, and that’s the reason the analytics community is particularly infatuated with Chase.

He’s not necessarily an elite athlete, and he does have some inconsistencies against press coverage, but Chase’s route running, physicality, and ultimate alpha trait makes him a supremely reliable target.

The Lions are dark horse playoff contenders this year, but almost out of necessity. They haven’t been contenders since the Jim Caldwell years, and the jobs of Matt Patricia and Bob Quinn are dependent on immediate success. Additionally, years of contact are starting to take their toll on perennially underrated signal-caller Matt Stafford, and time is running out.

There’s a chance the Lions could make a leap this year, but if they ultimately pick at eight in 2021, that’s a sign that even an ultimatum couldn’t force them past mediocrity. And that means big changes will be coming, starting at head coach and quarterback.

I would not be surprised if the Cardinals outplay their expected draft position. They have a lot of talent, especially on the offensive side of the ball. But on defense, they’re still a bit short-staffed, and they have aging veterans at positions of importance.

One position, in particular, is cornerback, where starters Patrick Peterson and Robert Alford are both now over 30 years old and nearing the cornerback cliff. In preparation for that, it would be smart for the Cardinals to draft Patrick Surtain II, a long, physical 6-foot-2 defensive back who moves extremely well for his size and can thrive on the boundary.

Jon Gruden and the Raiders better hope for a Tannehill-esque resurgence from one of their rostered veteran quarterbacks, because it’ll be tough to get their pick of the litter at quarterback with the 10th overall selection.

If the top quarterback options are exhausted before this point, it’s almost better for Las Vegas to wait, and instead indulge at one of the positions where elite talent still remains. In this case, Florida State’s Marvin Wilson is available, and he can provide an immediate upgrade to Las Vegas’ interior presence.

Now that the Los Angeles Chargers have a presumed franchise quarterback in Justin Herbert, they can’t be shy when it comes to improving their offensive line. Third-round rookie Trey Pipkins was intriguing in limited 2019 action, but pinning one’s hopes on a raw FCS prospect has its risks.

If Pipkins’ development hits a snag, it makes sense to bolster the unit with a powerful, punishing player like Clemson’s top blindside blocker Jackson Carman, and secure the health of Herbert.

The Denver Broncos are an up-and-coming team in the AFC, but there are still a few areas of concern. Cornerback is one of those areas, as injuries and age have clouded the team’s outlook at that juncture. Assuming that slot cornerback Bryce Callahan reprises his role in 2020, the Broncos may have a bigger need on the boundary, which is why Caleb Farley makes sense here.

Farley has a combination of size and athleticism that makes him one of the best cornerback prospects in 2021, and if he continues to develop, he could lock down one side of the field for Vic Fangio.

The Falcons have a host of potential solutions on the edge, but it’s very possible that none of them provide the necessary impact in 2020. The Falcons declined Takkarist McKinley’s fifth-year option and traded a seventh-round pick for Charles Harris. Dante Fowler has the best chance at helping the pass rush, but even then, he’s only one half of an edge tandem.

Atlanta needs another one, and after unsuccessfully banking on athletic rushers in the past, they might be inclined to go with a safe pick with Carlos Basham, who supplements his lack of superior athleticism with precision, power, smarts, and a high motor.

We saw how much the Dolphins value physical versatility on defense when they selected Auburn cornerback Noah Igbinoghene with the 30th pick in the 2020 NFL Draft. Igbinoghene has the skill set to play all around the secondary, and Hamsah Nasirildeen will have a similar kind of position-less appeal.

This may be a bit of a reach for him at this point, as Nasirildeen comes with an injury history, but his athletic ability, along with his 6-foot-4, 212-pound frame, allows him to play from single-high to linebacker, and that versatility is something Brian Flores will covet.

With a roster that’s still largely built to win now, I’m willing to bet Matt Nagy won’t have a ton of patience in the Bears’ new episode of a quarterback controversy. The team traded for journeyman Nick Foles to compete with Mitchell Trubisky for the starting job, but the reality is, neither quarterback gives off the impression that they can earn Nagy’s trust long-term.

With an aging playoff roster, Nagy and Ryan Pace have to act quickly if they deem their quarterback room beyond saving. A first-round pick in 2021 might not be quick enough, but Jamie Newman has the athleticism and arm talent to thrive in the NFL, and a year at Georgia could do wonders for his development.