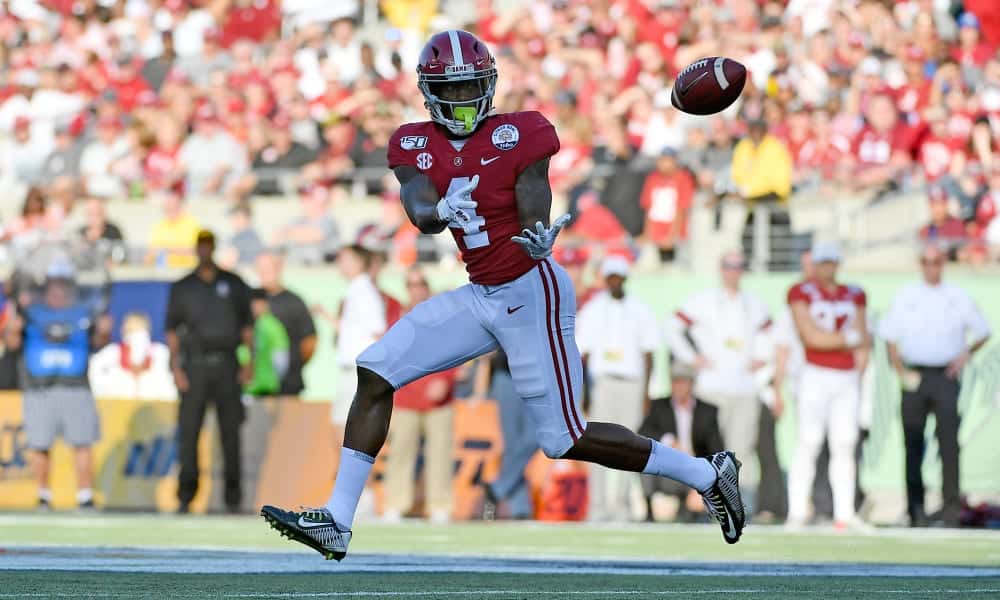 After months and months of endless prep and game film, we finally can place names with landing spots with the 2020 NFL Draft in full swing. Among those top prospects is Alabama’s wide receiver Jerry Jeudy, who’s value when it came to 2020 rookie drafts in dynasty leagues was always expected to be high.

Jeudy came into the process considered as the best route runner in the 2020 draft, and would likely have been the top receiver off the board in any other year. Ultimately, Jeudy was the second receiver off the board, selected 15th overall by the Denver Broncos. Let’s take a look at his dynasty value, both in the short and long-term, now that he is paired with Drew Lock in Colorado.

As I mentioned earlier, Jeudy would have been a top pick in any other draft, and in fact, he entered the draft as PFN Draft Expert Tony Pauline’s number one wide receiver. Therefore, I am sure the Broncos were dancing in the draft room when they got him at the 15th overall pick.

Coming into the 2019 season, Jeudy was considered the consensus WR1 in dynasty leagues as well as among the wider NFL community. Jeudy “falling” to 15th and as the second WR off the board has nothing to do with his college output, but it is a testament to how highly NFL general managers covet the speed of Henry Ruggs. When you watch Jeudy play, he simply pops off the screen.

He is undoubtedly the best route runner in this draft, and the former Biletnikoff Award winner mixes tight, crisp route-running with impressive top-end speed to keep defenses on constant lookout. His fluid hips and ability to leverage a cornerback help to get him on the correct route from the start instead of having to work back to a spot on the field.

Even on an Alabama team that will go down in history with perhaps the best combination of wide receiver talent ever, Jeudy remained the WR1 from the start of his career. The junior finished his career with 159 catches on 220 targets (72.3%) for 2,742 yards and 26 touchdowns.

How will Jerry Jeudy affect the Denver Broncos moving forward?

Landing Jeudy with the 15th overall pick was a dream for the Broncos. They needed to address the wide receiver position, and landing who was the receiver considered to be the number one prospect for a large part of the last year is as good as it gets.

Denver’s offense is now loaded when it comes to talent. Jeudy joins 2019 first-round TE Noah Fant and breakout WR Courtland Sutton as weapons for QB Drew Lock. Not only that, but defenses must be aware of the running game with recently acquired Melvin Gordon, as well as both Phillip Lindsay and Royce Freeman.

Jeudy is, arguably, the most complete WR in the draft. His polished route-running and utilization of the entire route tree will make him an elite play-maker in the NFL. The combination of technically sound routes and speed make him an ideal weapon in the Broncos’ offense. The ability to play inside at the slot position or outside on the perimeter makes Jeudy the perfect threat for offensive coordinator Pat Shurmur’s spread offense.

In 2019, especially after the Broncos traded away Emmanuel Sanders, teams were able to shade coverage over and even double team Sutton. However, that option is now off the table as Jeudy is simply too complete of an offensive weapon. Defenses will now be forced to play the Broncos outside receivers in either man coverage or hope they don’t get exploited in a zone scheme. Add in the vertical threat of Fant and few teams, if any, have enough skilled defensive backs to cover these three elite options.

A huge boost for Drew Lock

No one on the Broncos team will be more thrilled about this pick than the quarterback. It did not take long at all for Lock to reach out to his new teammate over social media.

“Call me whenever you need me,” Lock told Jeudy. “I’m ready to go over the playbook tonight, tomorrow, whenever you’re ready.”

Lock was going around QB20 in dynasty startups prior to the NFL Draft, but that should not be the case anymore. The addition of Jeudy vaults him to just outside of the top-12 quarterbacks for me heading into 2020. The combination of his strong arm and offensive weapons makes Lock a high riser on draft boards.

There is zero risk in this pick for the Broncos or for any Lock owners. While Jeudy may not be the number one option out of the gate, he should grow to be in time. His addition will keep the Broncos’ opponents honest and will give dynasty owners fantastic value when using picks on either Jeudy or Lock this offseason.