The 2020 NFL Draft wide receiver class is the definition of stacked. Amidst all this competition, is Oklahoma's CeeDee Lamb making a case to be the best?

The 2020 NFL Draft class is filled with superstar potential at the wide receiver position. I stated in PFN’s live CFB blog last weekend that this class of wide receivers is as good as the 2016 defensive line class and the 2017 defensive back class, both of which have churned out a vast amount of talent into the NFL. You ask any draft analyst, and they will espouse the Alabama trio of Jerry Jeudy, Devonta Smith, and Henry Ruggs III, or maybe Colorado’s Lavish Shenault, or Clemson’s Tee Higgins. After this weekend, however, one player rose above the rest and planted himself firmly at the top of his position. That player? Oklahoma’s CeeDee Lamb.

Lamb had had a relatively quiet start to the season. He came into the Red River Rivalry (it will never be called the “Showdown”) with 18 receptions for 439 receiving yards and 7 touchdowns. While that is by no means a bad stat line, it just wasn’t what many anticipated for the superstar. Just like the movie, though, the silence of the Lamb would not continue for much longer.

Lamb dominated on the national stage against Texas. Lamb posted a stat line of 10 receptions, 171 receiving yards, and 3 touchdowns. By my count, he forced 9 missed tackles on just 10 catches. Lamb somehow found a way to score on this play. 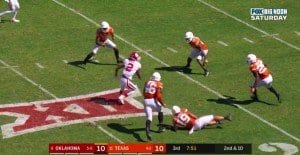 Number 19 laying there on the ground was the first player who tried to tackle Lamb. The rest… didn’t do it either. Here’s the full play:

Lamb truly embarrassed Texas this past weekend, and his performance offered a glimpse into what makes CeeDee Lamb so special as a player. Lamb isn’t just a one-trick pony as a receiver. While he doesn’t have blazing speed like Oklahoma’s Hollywood Brown from a season ago (first-round pick in the 2019 NFL Draft), Lamb is just as dynamic of a receiver.

Lamb may not run a 4.3 but you can't tell me he's not a dynamic player. pic.twitter.com/Q9Q5veRUsW

You see in that play above just how good Lamb is in the open field. He’s a smooth operator who can change directions quickly and doesn’t lose speed. He’s also a threat after the catch every time he touches the football. He won’t run a 4.3 in the 40-yard dash, but Lamb can still pick up yards in a hurry. If you don’t believe me, just ask Texas.

starting to think CeeDee Lamb got an infinity stone or something pic.twitter.com/jOvbzRp81Z

One of my favorite things about Lamb is his ability as a route runner. His quickness and attention to detail show up when he releases off the line. Lamb just knows how to get open. Several past receivers in the NFL Draft just struggled to separate, but that’s not the case with CeeDee.

On this play, Lamb stutter-stops off the line and fires up the field. The pick by Rambo springs him free and Lamb scores easily.

Even when Lamb doesn’t get the ball, he still works defensive backs. I actually laughed at Lamb’s chirpiness during this play.

Even if the play isn’t designed to go to @_CeeDeeThree he’s still working on his Releases off the line. ?? pic.twitter.com/MhWlzatzDP

CeeDee Lamb offers a dynamic skill set as a receiver. He can line up anywhere as a receiver, he generates separation easily, and he’s the best 50-50 catcher in this draft. He possesses elite concentration, size, body control, and athletic ability. He’s a smart route runner who wins with sharp routes and quickness, and he’s a threat to score on every play. In my opinion, Lamb is just getting started and looks all the part of a future first-round pick in the NFL Draft. He and Hollywood Brown can be back-to-back first-round picks for Oklahoma.