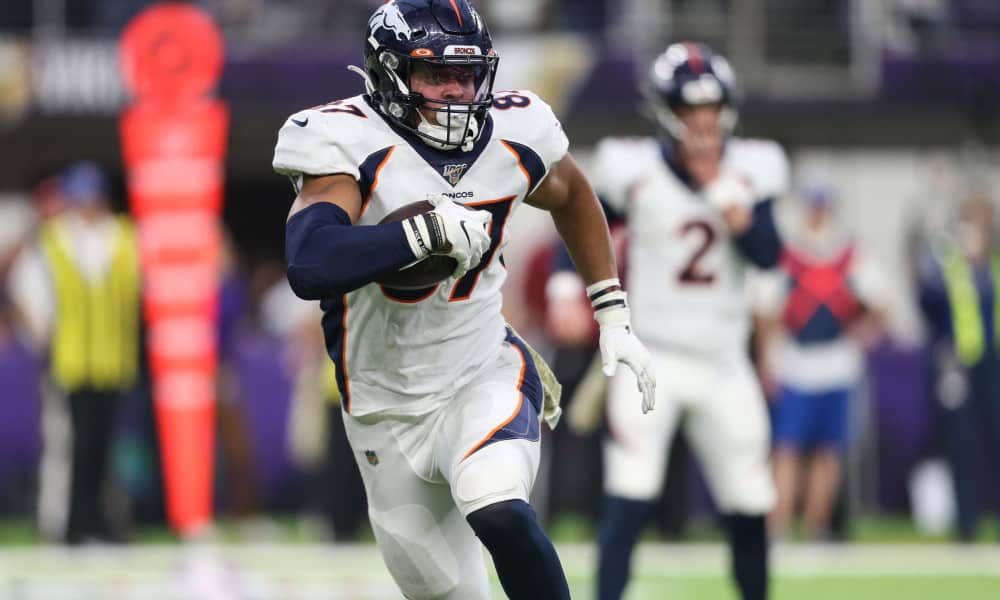 Tight end Noah Fant made a noticeable splash during his rookie year with the Denver Broncos. It took some time, but the rookie TE ended the season on a high note, earning 50 or more receiving yards in four of the final eight games of 2019 after failing to receive 40 yards in the first half of the season. However, Fant established some chemistry with fellow rookie quarterback Drew Lock in the last five games of the season. Looking at that chemistry, paired with Fant’s elite athleticism, could there be a new dangerous QB to TE connection in the making?

Fant scored a 9.89 Relative Athletic Score on a 10 point scale. RAS is a composite metric based on the average of all of the percentiles for each of the metrics the player completed at either the combine or Pro Day. He was the highest-rated TE in his draft class and ninth out of 855 TEs dating back to 1987.

The former Iowa Hawkeye measured out at 6 feet, 4 and 1/8 inches tall, a very average height as far as the RAS scoring is concerned. Fant also weighed out at 249 pounds, based on this weight he has a projected 40-yard dash time of 4.81 seconds. This projection can be found by multiplying his weight by 0.00554 and then adding 3.433.

When it came time to run the 40-yard dash at the 2019 NFL Combine, he recorded a time of 4.5 seconds, a -.31 second differential from his projected time. This differential and time all correspond to a 9.87 out of 10 RAS score in speed and part of his composite elite speed grade.

He also boasted an elite explosion grade from putting up a 39.5-inch vertical jump, and broad jumped 10 feet 7 inches. For RAS, these equal a score of 9.88 and 9.8 out of 10, respectively. Fant finished his trio of elite RAS grades following the results of his agility drills. He ran a 4.22 second 5-10-5 short shuttle time, equaling a RAS score of 8.72, the only rating below nine in his elite trio. He also ran a 6.81-second three-cone drill, which corresponds to a 9.78 RAS score.

These extremely athletic marks and solid tape were why Fant and fellow Hawkeye TE T.J. Hockenson were projected to eventually be selected in the first round of the 2019 NFL Draft. Hockenson was chosen first, with the eighth overall pick, by the Detriot Lions. Fant followed when he was selected with the 20th overall pick by Denver. Iowa became the first college football team with two tight ends selected in the first round in NFL history.

Promising but slow start to the rookie year

As stated earlier, Fant was riding a hot streak to end his rookie year, earning two 100-yards games and more stable success in the passing offense. The rookie tight end finished the season with 562 yards and three touchdowns. His receiving yard total and 40 receptions were both franchise rookie records for a Broncos tight end.

During Fant’s first eight games, the Broncos were going with Joe Flacco as there starting QB. He ultimately went 2-6 to start the season and got pulled in favor of Brandon Allen, who started in week nine. Allen played until Week 13 when he too was replaced by the rookie QB Lock to finish the final five games of the season.

While Fant received more than half of his targets from Flacco in 2019, he never earned more than 37 yards while Flacco was at the helm of the offense. However, Fant did find more success while Allen and Lock ran the offense. This touchdown scamper below was in his first game post-Flacco.

This touchdown is a perfect example of the uber-athleticism Fant possesses and displayed on the field to end the season in a more fluid offense through his speed, explosion, and acceleration. It was a modest season; however, TE can be one of the more difficult positions to learn when making the jump from college to professional football. Fant making his presence known during his rookie year is an auspicious sign in his career development.

A reloaded Broncos offense in 2020

Another reason a jump in Fant’s production seems likely is due to the new improvements made to Denver’s offense. The emergence of Fant and Lock was also fueled by another rookie, WR Courtland Sutton, who has emerged as WR1 for the Broncos passing attack. To fill out a trio, Denver also drafted Alabama’s Jerry Jeudy and Penn State’s KJ Hamler in the 2020 NFL Draft.

The Broncos also bolstered their backfield with the signing of Melvin Gordon after the former first-round running back could not agree to terms with the Los Angeles Chargers. The Broncos running game now contains a two-headed monster featuring Gordon and Phillip Lindsay.

With Lock getting the chance to be the starter in week one in 2020 and show his potential, Fant also gets to play with the signal-caller he found the highest production along with a stellar supporting cast. With all the pieces in place, Fant can build upon his rookie season and hopefully receive more chances to show off his athleticism in the process of helping the Broncos win in a more consistent and dynamic offense.