Wide receiver CeeDee Lamb was not an elite athlete according to RAS, but the tape shows a player who can win in multiple ways for the Dallas Cowboys.

By Nicholas McGee
August 6, 2020
Jump around this article Click to show
CeeDee Lamb and his lackluster RAS scores
Lamb’s physicality shines through in blocking
Flexibility helps Lamb in open field and at the catch point
Lamb can have significant rookie impact

Wide receiver CeeDee Lamb was one of the major headline makers of the 2020 NFL Draft when he surprisingly fell to the Dallas Cowboys with the 17th overall pick. This left many salivating at the prospect of a player many believed to be the best in class at his position joining one of 2019’s most potent aerial attacks.

Lamb’s addition to a receiving corps that already includes Amari Cooper and Michael Gallup seemingly stacked the deck further in the favor of Dallas quarterback Dak Prescott and the Cowboys offense.

Though the Cowboys may have been left wondering how they were able to land a wide receiver of Lamb’s caliber so late in the first round, his Relative Athletic Score (RAS) from the 2020 NFL Scouting Combine suggests Dallas is not getting an elite athlete at the position.

Lamb’s RAS of 7.45 saw him ranked as WR26 in the 2020 class. The former Oklahoma Sooners star failed to earn an elite grade in any area in his combine workout. 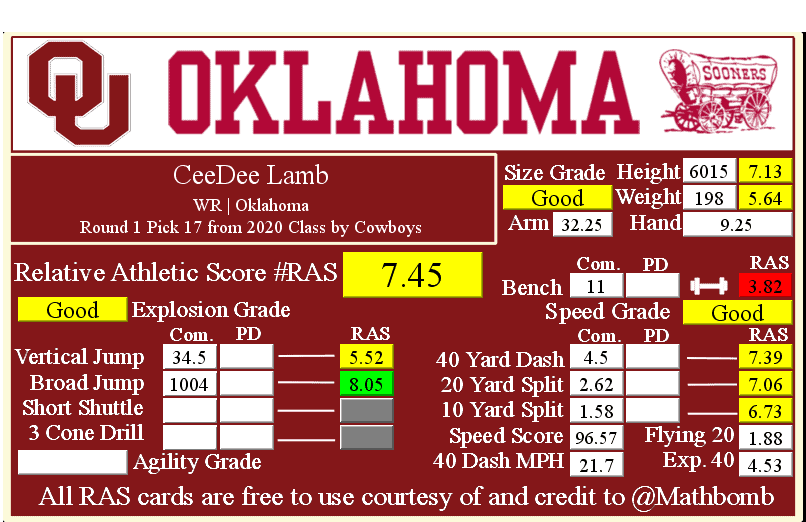 He did not qualify for an agility grade having not completed the short shuttle or the 3-cone drill, while Lamb received good grades for size, explosion, and speed, falling short of an elite score in the latter category despite slightly outperforming his projected time in the 40-yard dash with a run of 4.5 seconds.

That time may be well shy of what top-tier athletes at wide receiver have produced, but Lamb’s film suggests he can be another player who lends credence to the idea that speed is not a necessity to become one of the best at the position in the NFL.

Indeed, the shortcomings that his RAS hinted at have yet to manifest on the field, with Lamb proving that, at the college level at least, he is a receiver who can win in a variety of ways.

Lamb’s physicality shines through in blocking

At 6-foot-2 and 189 pounds, Lamb has the frame to star as a number one receiver at the next level and is not afraid to use his build to his advantage. However, given the limited amount of press coverage he has faced so far during his career, the physicality he has in his locker has primarily been seen in the blocking game.

Lamb was arguably the best blocking receiver in the 2020 class and he provided a demonstration of his abilities in that aspect when he sprung Kennedy Brooks for a 48-yard touchdown in Oklahoma’s win over Iowa State last season.

Though second-level blocking by receivers is highly valued, with Lamb it is merely a highly impressive footnote to his repertoire, at the top of which is his remarkable ability after the catch.

Lamb averaged an incredible 21.4 yards per reception in 2019 and he did so largely by making moves in the open field that indicated his agility score would have been elite had he tested in those drills at the combine.

Flexibility helps Lamb in open field and at the catch point

Agility, vision, speed, and contact balance were all on display in Oklahoma’s upset loss at Kansas State as Lamb took a short pass 70 yards for the touchdown to fuel the Sooners’ failed comeback attempt.

Short throws and screens on which Lamb picked up substantial yardage with the ball in his hands were a staple of the Oklahoma offense in 2019, but the same lower-body flexibility that enabled him to make such a devastating impact against Kansas State allows Lamb to create separation with this stem.

That is what he did on this play where he wasn’t targeted against Texas, utilizing quick feet and a head-fake to get the cornerback to open his hips to the outside and gain inside leverage.

When Lamb has had the benefit of separation, he has taken full advantage of it, making the most of a free release against Iowa State to haul in a 48-yard pass from Jalen Hurts, adjusting to the ball and holding on to the catch despite having the distraction of a safety coming across to attempt to intercept the pass.

Lamb can have significant rookie impact

The play that encapsulates Lamb’s potential came in the Red River showdown when he went in for his third touchdown of the game on a 27-yard connection from Hurts.

Lamb exploited off coverage and a mismatch by using his change of direction ability to get open going across the field, before working back to an underthrown ball, shrugging off two tacklers and somehow tiptoeing down the sideline for the score.

It was a play that illustrated everything Lamb brings to the table: his ability to win with route-running rather than just physical traits, his catch-point skills, his physicality and agility he did not have the opportunity to put to the test before the draft.

The Cowboys were not put off by Lamb not succeeding in proving himself an upper-echelon athlete at the Combine and, even in a year where the receiver’s preparations for his rookie season have been severely hindered by the public health situation, they should be hopeful the many ways in which he wins can quickly translate to the NFL.

With a creative mind in Kellen Moore calling the plays and Cooper and Gallup sure to attract significant attention from defenses, Dallas should have little issue putting Lamb in space and getting him in situations where he can get into the open field for extra yardage.

Should they excel in that regard, then the addition of Lamb could be one that sees a passing game that ranked second in the NFL in total yardage last season scale even greater heights in 2020.

Deshaun Watson disciplinary hearing concludes: What are the next steps?