After already taking a look at the Denver Broncos quarterbacks and their secondary pieces, today we'll be reviewing the Broncos' 2020 running backs.

After previously taking a deeper look at the Denver Broncos quarterbacks and secondary, we’ll be reviewing the Broncos’ 2020 running backs. This is the third installment in our series going through position-by-position and analyzing each player to determine how they would fit on the final roster if they were to make it, and what their chances of making it are.

Overview of the Broncos 2020 running backs

The Broncos’ running back room is crowded, to say the least, both at the top of the depth chart and the bottom.

Melvin Gordon and Phillip Lindsay are gearing up to be in one of the National Football League’s most contested and interesting training camp battles for the starting spot, while Royce Freeman, Khalfani Muhammad, Jeremy Cox, and LeVante Bellamy will compete for a spot on the final 55-man roster.

With the stage set, here’s how each player individually fits into the picture, and what their chances are of making the final roster and seeing the field during the regular season.

Can Melvin Gordon find success with the Broncos?

The Broncos’ decision to sign Gordon to a contract was widely controversial in the eyes of the NFL world, not only because Denver already had a capable starting running back on the roster with Lindsay, but because of the recent history of RBs playing on a second contract is incredibly poor.

Gordon’s contract becomes especially concerning when you consider he’s posted an Offensive Share Metric (OSM) north of 20 just once in his career. Last season, his OSM of 10.8 ranked as the 10th worst among qualifying backs. That ranks him below players like Carlos Hyde, James Conner, Jordan Howard, and most importantly, both Freeman and Lindsay. 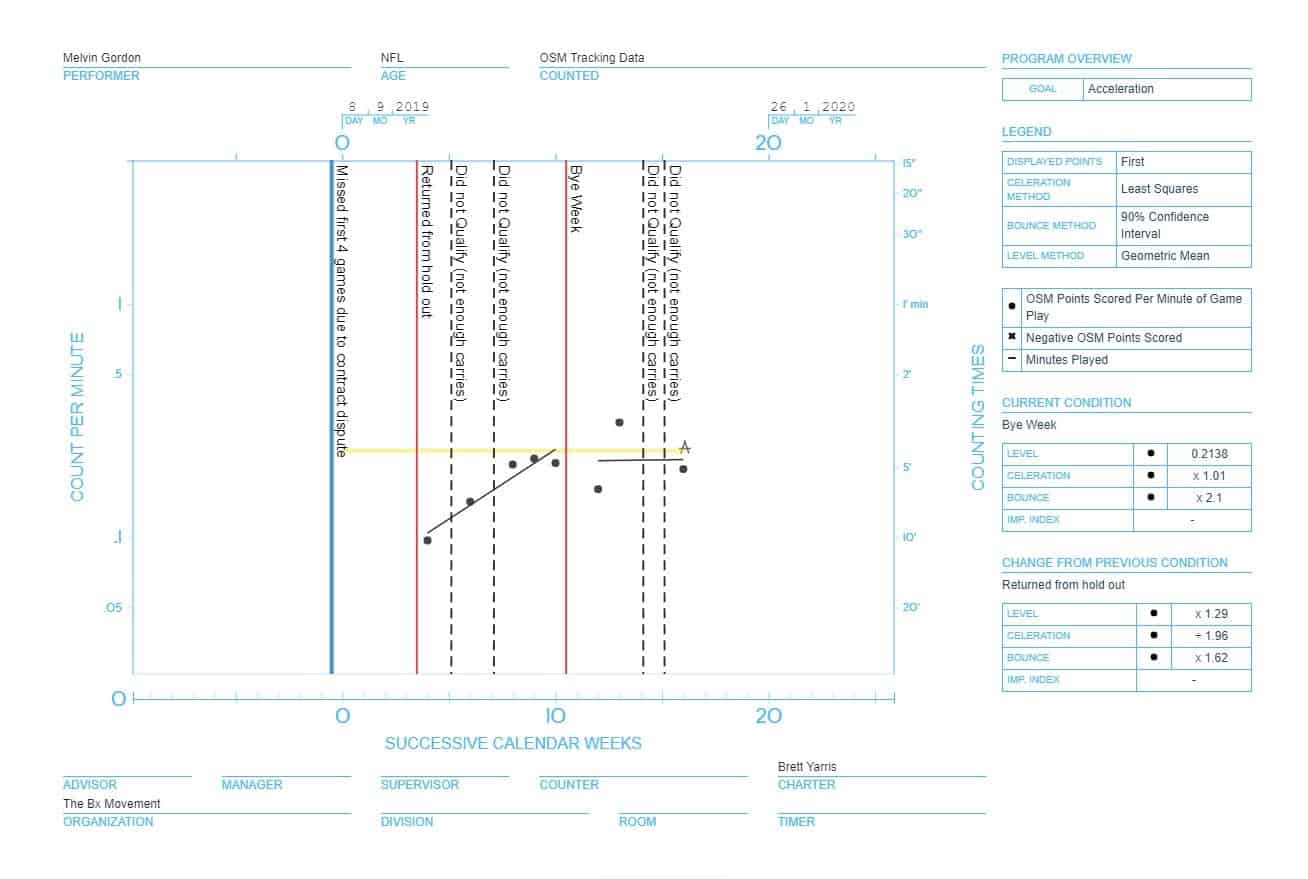 In the 2019 season, Gordon had just one game in which he scored an above-average OSM (yellow line). This is concerning when you consider how Gordon’s OSM has been on a downward trend since 2016. 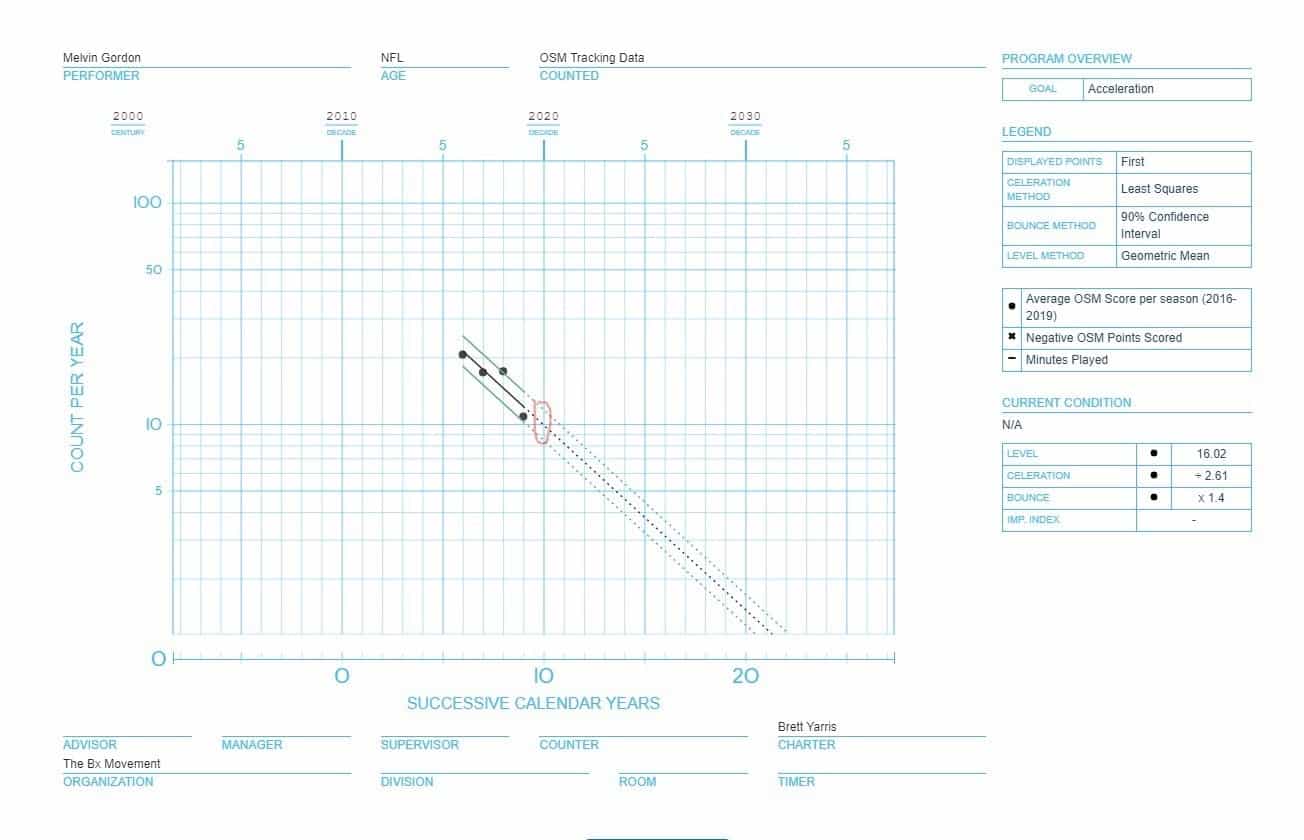 From 2016 to 2019 Melvin Gordon’s OSM decreased every single year at a decline of 62%. If Gordon’s transition to the Broncos goes smoothly, we project an average OSM over the course of the season as high as 12, but we could also see him drop to an OSM of 8.4 if the move to Denver doesn’t work out.

In Gordon’s defense, OSM only accounts for a backs’ performance purely as a runner, and the Broncos signed him in large part for his ability as a pass-catcher. That said, $8 million per season is a lot to pay for a RB who appears to be a downgrade to Freeman on the ground according to OSM.

Related | Strengths and weaknesses of the Broncos 2020 defense

What about Phillip Lindsay and his 2019 success?

General manager John Elway and the rest of the front office made it clear that they want Gordon to be the top dog out of the Broncos’ 2020 running backs when they elected to sign him to a two year, $16 million deal instead of signing Lindsay to a contract extension this off-season.

That makes 2020 a contract year for Lindsay and gives him yet another opportunity to prove Denver’s front office wrong. He did it in 2018 when they drafted two RBs before signing him as an undrafted free agent, despite the fact that he resided in their own backyard. He did it again last year when the Broncos said they wanted to make Freeman the offense’s bell-cow.

For Lindsay to fend off the competition yet again in 2020, he’ll have to improve a lot as a pass-catcher, as he’s tallied just 70 receptions for 437 yards through his first two seasons in the league. That must change when you consider the Broncos’ power back, Freeman was a more-productive receiver out of the backfield last season.

If Lindsay can transform into a more productive satellite back, he should have the inside track on Gordon for the starting job, as he has a sizable edge in terms of chemistry and familiarity with the team, which should be valuable in a shortened off-season.

Is there room for Royce Freeman?

After struggling to live up to high expectations, Freeman finds himself in a position where he’ll have to compete to be one of the Broncos’ 2020 running backs.

In 2019, he was the team’s best power running back, but with Gordon on the roster, that is no longer the case. Gordon has consistently been one of the league’s most productive rushers at the goal line and against stacked boxes, as evidenced by his 36 rushing touchdowns over the past four seasons.

With Gordon now positioned as the Broncos primary rusher and Lindsay as the second, Freeman will now have to compete with Muhammad, Cox, and Bellamy for a backup job. Muhammad, springy and full of burst, would be a perfect backup to Lindsay and offers much more on role special teams than Freeman, while Cox and Bellamy could each serve the role of a short-yardage thumper.

As of now, Freeman’s greatest advantage in the upcoming position-room competition is his experience with the team, and that his dead-cap number of nearly $500,000, which means cutting him would save less cap space than cutting either Cox or Bellamy.

Muhammad was a preseason standout for the Broncos in 2019, and it could easily be argued that he was more deserving of a final roster spot than Devontae Booker last season.

In the 2019 preseason, Muhammad carried the ball 31 times for 146 and one touchdown and added nine receptions for 55 yards through the air while looking like the best skill position player on the Broncos second and third-team units.

He also made an impact on special teams in the preseason, leading special teams coordinator Tom McMahon to say he would compete for the role of Denver’s punt and kick returner as well this off-season. His combination of speed, vision, and receiving ability make him the ideal backup for Lindsay.

Bellamy has a chance to be the next Broncos’ undrafted gem, though the odds are stacked against him to becoming one of the Broncos 2020 running backs.

He displayed promise at Western Michigan University as a between-the-tackles thumper with his willingness to charge into the hole to pick up four to five yards at a time, but it will be tough to convince the Broncos he’s better suited for that role than Freeman.

That task appears even more challenging considering he has such a short timeframe to make that impression and the Broncos would save slightly more money by cutting him than Freeman.

Out of all of the Broncos’ 2020 running backs, Cox has the steeper climb to make the final roster.

Alongside Muhammad, he is one of just two RBs on the team that doesn’t carry any dead-cap figure whatsoever. However, whereas Muhammad has a clear path to a roster spot as Lindsay’s backup and a special team’s contributor, the role Cox would fill on the final roster remains a mystery.

He would arguably fit best as a fullback, but offensive coordinator Pat Shurmur rarely utilizes a fullback and already has Andrew Beck on the roster for the rare times he needs one. If Cox made the final roster, it would be one of the biggest surprises of the season.

The battle for the top running back spot should be a closely-contested one that should feature a competitive nature, all season long.

Considering the lack of time the team will have to work out together, it seems like Lindsay will start as the Broncos’ lead back, but as Gordon builds chemistry with the offense he’ll become the focal point of the backfield over time.

On the backend of the roster, I expect Freeman to retain a spot as a power back and backup to Gordon, even if his role becomes greatly diminished. Also, look for Muhammad to claim a spot as Lindsay’s insurance policy and a key special teams player.

Bellamy has a chance to stick around on the team’s practice squad, especially if the NFL increases the size of the practice squads in response to the ongoing pandemic, but neither he nor Cox possesses a strong chance to make the final roster.

Sources: Byron Leftwich in contract discussions with Jaguars, expected to be hired as new head coach

Could Sean Payton return to the Dallas Cowboys in a year?