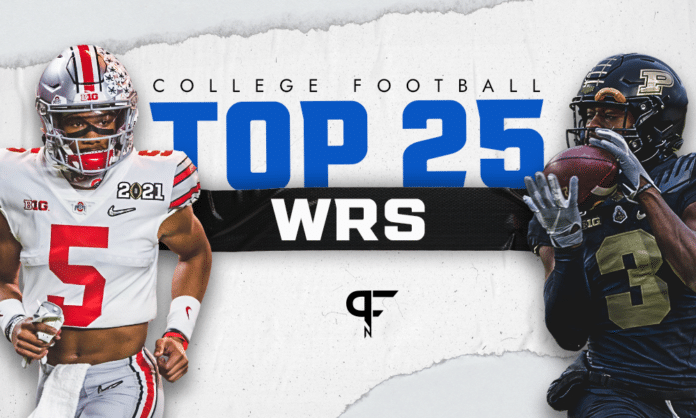 Which receivers can be counted on to make game-changing plays? These are the top wide receivers in college football in 2021.

When we first ranked the Top 25 Wide Receivers in college football before the season, we set the criteria for what defines such a player. The wide receivers who make the game-changing plays are the ones who set themselves above the rest. Now that we’re a few weeks into the 2021 season, let’s revisit the question. Who are the Top 25 Wide Receivers in college football right now?

Since our last ranking, several Group of Five pass catchers have climbed up the boards. But a familiar face on the NFL Draft circuit sits in first place.

Can anyone other than Drake London be WR1 in college football right now? Through five weeks, the USC receiver has been the most dominant player at his position. He currently leads the nation in receptions (48) and receiving yards (670). He’s had at least 9 catches and 130 yards in four of five contests and has been consistent no matter who’s in at quarterback.

London is a massive target at 6’5″, 210 pounds, and that size is a foundational part of his success. The hulking Trojans star has drawn dozens of contested targets already, but he turns any 50-50 situation into a 90-10 with his frame, coordination, focus, and hand strength. London doesn’t separate quite as easily as smaller receivers, but he has functional route-running and RAC ability as well. That only adds to his skill set.

When someone says “big-play threat,” the first name that should come to mind is Calvin Austin III. At 5’9″, 162 pounds, Austin will be dismissed as a mere speed threat by some. But the Memphis wideout is much more than that.

Sure, his speed is a foundational part of his game. But beyond that, Austin is a brutal technician who uses his elite speed and explosiveness with calculated, delicate, yet deadly efficiency.

In just five games, Austin already has 35 catches for 637 yards and 7 touchdowns — 590 of those yards coming over the last four weeks. Against Arkansas State, Austin erupted for 239 yards on 6 receptions. He also has a punt return for a touchdown, the second of his career.

If we’re ranking the top wide receivers in college football based on how much they mean to their teams, then Fresno State wideout Jalen Cropper has to be high on the list. The Bulldogs have been one of the darlings of the early 2021 campaign. Quarterback Jake Haener has already had a few legendary moments. In almost every one of them, the receiver on the other end has been Cropper.

Through six games, Cropper already has 44 catches for 528 yards and 9 touchdowns. His 14-catch, 141-yard explosion against UCLA helped Fresno State notch a win against the Top 25 Bruins, but Cropper has been relentlessly consistent this year.

He has at least 1 touchdown in every game. In Week 4, he had 4 touchdowns and 108 yards on 10 receptions. With speed, quickness, and outrageous body control, Cropper is set to keep dominating Mountain West opponents.

It’s almost gone unnoticed — simply because we expected it — how good both Garrett Wilson and Chris Olave have been this season. Both receivers have validated their claims to first-round consideration.

Wilson, in particular, has been a consistent target for his new quarterbacks. Even sharing targets with Olave and Jaxon Smith-Njigba, he’s still top 20 in the nation in receiving yards with 462. He also has 4 scores on 26 catches.

Both Wilson and Olave have been assets to the Buckeyes’ offense, but Wilson’s three-level ability arguably makes him more valuable.

Wilson has great route-running ability before the catch. At the catch point, he’s assertive in contested situations. After the catch, he tacks on extra yardage with explosiveness and agility. Wilson’s a complete player, and he’ll be relied upon in more game-changing plays down the stretch.

By now, you’ve probably heard an announcer, at some point, inflect his voice while shouting “KHALIL SHAKIR” on an assortment of gravity-defying plays. Shakir has made that his trademark five weeks into the college football season.

With 31 catches, 518 yards, 4 touchdowns, and a 16.7 yards per catch average, Shakir has quickly distinguished himself as one of the nation’s premier offensive catalysts.

At 6’0″, 190 pounds, Shakir isn’t necessarily a unique physical specimen at the WR position. But locked within that perfectly average frame is an unyielding propensity for otherworldly catches.

It doesn’t matter how accurate a pass is. If it’s within Shakir’s reach, he’ll rise and contort to catch it — be it with one hand or two. Lately, Shakir has preferred the former. It’s his ability to so nonchalantly turn sure incompletions into catches that makes him so special.

Chris Olave remains one of the top wide receivers in college football. Yes, I’m sure you’re surprised. Since the 2019 campaign that saw him log 48 catches for 840 yards and 12 scores, Olave has been highly regarded among the nation’s pass catchers. Nothing’s changed in 2021.

While Olave hasn’t dominated his team’s target share, he’s done nothing but produce when the ball comes his way. Currently, he has 23 catches for 374 yards and 5 scores.

There wasn’t much room for growth for Olave heading into the year. The Ohio State WR was already a fairly complete prospect. But on top of his trademark speed and explosiveness in open space, Olave has shown he can rise for passes in tight situations and use body control to convert. That’s a big development for a receiver who’s largely won off of his smooth style and separation ability in recent years.

Avoid Wan’Dale Robinson at all costs, lest you lose your ankles. The highly-coveted Nebraska transfer has been perhaps the most important piece in Kentucky’s offensive revitalization this year. He’s quickly become a favorite target of quarterback Will Levis. Five games in, Robinson has 29 catches for 467 yards and 3 scores — with much of those yards coming after the catch.

Robinson is a weapon with the ball in his hands, plain and simple. His deadly lateral suddenness and explosive capacity are reminiscent of Kadarius Toney from a year prior. Robinson can attack and destroy tackling angles with one quick motion.

Making those cuts is as natural as breathing to him. With his speed and voracious RAC ability, Robinson remains one of the greatest threats for SEC defenses.

Heading into 2021, one of the biggest questions was who would step in to be Sam Howell‘s top receiver. Dyami Brown and Dazz Newsome both left for the NFL this past spring, leaving the role of primary pass catcher open in the North Carolina offense. For a moment, it looked like Howell was going to be without a premier receiver. But Josh Downs decided emphatically that he was indeed the guy.

As of this writing, Downs is fourth in the NCAA in receiving yards. On 40 catches, he has 620 yards and 6 touchdowns in just five games. At 5’10”, 180 pounds, Downs isn’t going to wow anyone with his size. But he brings the same trademark speed that lent Brown plenty of space downfield — and perhaps more of it. With that speed, Downs can separate with ease and lay out for long passes. He can also take routine dump-offs to the house.

If we were in Marvel’s Multiverse, you’d have a hard time convincing me Jahan Dotson isn’t a variation of Spider-Man. Even if you discount his supreme vertical athleticism and coordination in midair, the Penn State wideout still has the stickiest hands in the nation. All that’s left is to see him use his webbing to corral an off-target pass, and my suspicions will be confirmed.

While he may have turned in his mask for a face mask, Dotson still has his superhero moments on the field. His ability to rise, contort, and gather imprecise throws has made him a highlight factory through five weeks.

It’s no surprise Dotson is accounting for 33% of his team’s passing production with 446 yards and 6 scores on 35 catches. Keep on making plays, Spidey. Your secret’s safe with me.

Entering the season, Jalen Tolbert was one of the most underrated wide receivers in the nation. Five weeks in, that hasn’t changed.

Tolbert hasn’t found the end zone yet this season, but he hasn’t been targeted there often. Instead, he’s been designated as a chain mover and field stretcher. That, he’s done very well. He’s currently one of the nation’s leaders in yards per catch, with 460 yards on just 20 receptions.

To put his production into perspective, South Alabama quarterback Jake Bentley has thrown for just 927 yards. Tolbert has literally accounted for 50% of the team’s passing output.

Defenses usually hone in on those kinds of receivers, but Tolbert simply keeps dominating the production. It’s a testament to his skill. He has the size to win in contested situations while also possessing the speed to stack defenders in the deep third.

The 11-15 wide receivers are the ones I very much wanted to fit into the top 10 but couldn’t. Treylon Burks has unsurprisingly had his moments of greatness at Arkansas this year. Samori Toure has been a high-level playmaker in an offense that isn’t very pass-friendly. Erik Ezukanma is an underrated threat who led the nation in receiving yards before suffering a concussion. Jordan Addison is a dynamic playmaker with a bright future. And Zay Flowers took Andrew Booth‘s lunch money with his insane separation ability in Week 5.

This group does well to exemplify the sheer depth of college football playmakers. David Bell falls merely due to the talent above him. He himself is a complete wide receiver with legitimate Day 2 aspirations. The same goes for Kayshon Boutte, who has another year to wait before he’s eligible. Meanwhile, Deven Thompkins, Jaivon Heiligh, and Jacob Cowing comprise some of the most prolific wideouts in the Group of Five. Thompkins, in particular, has taken the league by storm with 639 yards through five games.

Speed dominates the final group in our Top 25 College Football Wide Receivers. Reed, Williams, and Wicks are all averaging over 20 yards per catch, and Danny Gray has also distinguished himself as a legitimate deep threat. The anomaly is Sterns, who’s more of a target sponge in Western Kentucky’s offense. There’s no shame in either style. All of these receivers have strengthened their draft stock through five weeks.