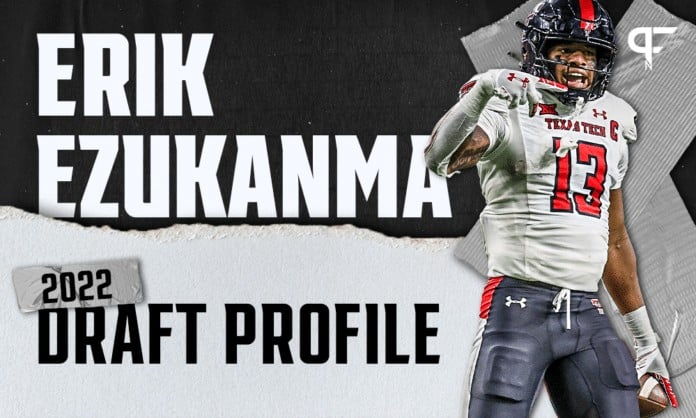 Lost in a wide receiver group that includes Garrett Wilson, Chris Olave, Treylon Burks, Drake London, Justyn Ross, Jalen Tolbert, and others, Texas Tech WR Erik Ezukanma is a potential first-round NFL Draft prospect — and he might have a better scouting report than most of the names listed. Who is Ezukanma? He’s a sleeper who’s slowly forcing onlookers to wake up and pay attention.

No doubt, perception plays a role in which prospects draw attention first in the summer. And several factors play into a prospect’s perception. Production is no doubt a factor, but school prestige also has some influence. For wide receivers in particular, quarterback play ties in as well. Even beyond these listed factors, more variables cultivate a prospect’s perception.

Why is this important? Because Ezukanma is a prospect that perhaps deserved a stronger national perception heading into 2021. And yet, when talking about other big-bodied pass catchers like Burks, London, and Ross, Ezukanma is routinely mentioned a sentence behind them. I’m here to say that’s wrong. And that Ezukanma might ultimately be mentioned first on draft night.

Ezukanma has an elite size/length/athleticism combination. With his traits, he can truly be a three-level threat at the next level. Ezukanma’s size is what stands out first. At 6’3″, 220 pounds, the Texas Tech WR has great range and density. He also has elite length, with arms that might measure over 32 inches.

Beyond his size, Ezukanma is an impressive athlete, and by extension, a tremendous run-after-catch threat. The Texas Tech WR has great lateral agility and elusiveness for his size. Furthermore, he owns superb explosiveness both off the line and in open space. Ezukanma has the burst to create and elongate space after the catch. He also has the deep speed to stack defensive backs.

Going further with Ezukanma’s run-after-catch ability, one has to mention what might be one of his best traits — contact balance. Ezukanma has arguably elite contact balance for a receiver. His legs are always churning, and he can bounce off contact with his dense, well-balanced frame. He can swim through congestion, slip away from arm tackles, and his contact balance combined with his elusiveness makes for a dangerous mix.

Too often, we’ve seen NFL teams enticed by wide receivers with high-end physical traits, only to see those receivers fade as professionals. This often occurs when receivers don’t have enough executional polish. Ezukanma is still a work in progress there, but he displays some exciting flashes.

Operationally, Ezukanma is strongest at the catch point. He has great body control and focus, and he’s authoritative seeking out the football. He actively targets the ball with his hands and rarely resorts to body catching. Furthermore, the Texas Tech WR has the toughness and focus to haul in passes amidst contact. When high-pointing the ball, he has a great sense of timing, and he uses his length exceptionally well. His ball-tracking ability also helps in those instances. Ezukanma naturally tracks and contorts to make plays.

Ezukanma has strong hands at the catch point. Rarely does he succumb to focus drops, a problem that plagues other receivers in the 2022 NFL Draft. This solidity as a catcher is inspiring, and on top of that, Ezukanma shows flashes as a route runner. There are glimpses of exceptional suddenness out of his breaks. Additionally, Ezukanma has shown he knows how to use his eyes to manipulate leverage. He can also use physicality to shake off defenders and break down sticky coverage down the field.

Among other things, Ezukanma has shown he can line up on the outside, in the slot, or even execute in motion. He can seamlessly transition from the catching phase to the run-after-catch phase, and he attacks each moment with a steely focus.

Ezukanma is an impressive NFL Draft prospect, but like his cohorts, he has room for refinement. Most of that refinement capacity can be found in his route running. Ezukanma has a somewhat limited route tree, and he also lacks a diverse release package at the line. He doesn’t always create separation on his own, although he’s shown the physical capacity to do so.

Moving forward, Ezukanma can round the top of his routes while traversing through zones. He can employ faster feet heading into his breaks at times and better engage varying stride lengths. Overall, his footwork could be more precise. Ezukanma doesn’t always run his routes at full speed all the way through. He also doesn’t display consistent twitch or urgency up the seam.

Rounding out Ezukanma’s profile, the Texas Tech WR seems more explosive laterally and horizontally than vertically. His physicality in contested situations could get him into trouble in the NFL. And while he’s physical as a receiver, he isn’t always an overwhelming run blocker.

Moreover, while Ezukanma has room to refine his route running, he shows potential there. The Texas Tech WR flashes fast feet, smooth hip sinks, and amped-up lower body movements ahead of his breaks. If he can be more consistent there, he could complete his NFL Draft scouting report.

Nevertheless, as it stands, Ezukanma is a wide receiver prospect worthy of Round 1 consideration. In the NFL today, receivers don’t necessarily need to be elite route runners. A larger emphasis is being placed on coaches simply scheming playmakers open and getting them the ball. Ezukanma is electric with the ball in his hands and in the air. That voracity as a playmaker in all three ranges, combined with his elite physical makeup, grants him an astronomical ceiling.

Now, Ezukanma is a hulking 6’3″, 220-pound specimen. But before he hit the collegiate stage, the Texas Tech WR was a lanky 6’2″, 186-pound receiver prospect. He had good athletic numbers — among them a 4.62 40-yard dash and a 31.2-inch vertical — but he wasn’t quite at his athletic maximum yet. Some teams noticed.

Still, Ezukanma was a four-star recruit in the 2018 recruiting class. Hailing from Fort Worth, Texas, Ezukanma received scholarship offers from teams like Ole Miss, Texas A&M, Arkansas, TCU, and Wisconsin. But for Ezukanma, the high-octane passing attack at Texas Tech piqued the most interest. He ultimately committed to the Red Raiders and made the five-hour trek to Lubbock.

His career at Texas Tech

When Ezukanma arrived at Texas Tech, he’d grown an inch to 6’3″, but he’d fallen in weight to 180 pounds. Still growing, Ezukanma received a redshirt from Texas Tech coaches in 2018, honing his craft off the field both physically and mentally. When Ezukanma returned in 2019, he’d grown 30 pounds (180 to 210). And he was ready to dominate.

Ezukanma’s first three games were relatively uneventful, but the Texas Tech WR turned up the heat in his final eight contests. Over 2018’s season-ending eight-game stretch, Ezukanma logged 34 catches for 589 yards and 4 touchdowns. He finished the season with 664 yards and became the first Texas Tech freshman to lead the team in receiving yards since 2009 top-10 pick Michael Crabtree.

2020 was a similarly productive season for Ezukanma. Even in a COVID-shortened 10-game season, with uncertainty at quarterback, Ezukanma remained steady as a dynamic playmaker. In 10 games, the Texas Tech WR logged 46 catches for 748 yards and 6 touchdowns. He earned first-team All-Big 12 honors for his play, earning an early spot on the 2021 Biletnikoff Award watch list.

As of this article’s initial writing after Week 2, Ezukanma is emerging as one of the best wide receivers in college football. Through two games, the Texas Tech WR currently leads the league in receiving yards with 322 yards, adding a touchdown on just 13 catches. He’s averaging 24.8 yards per catch. Considering how many of his targets come in the short and intermediate ranges, that’s extremely impressive.

Both physically and analytically, Ezukanma is a top-tier NFL Draft prospect with a scouting report that can easily crack Round 1. He has the size, athleticism, contested-catch ability, and run-after-catch prowess to be a versatile threat. And his early breakout age suggests that his talent simply supersedes that of his opponents.

Look for Ezukanma to keep dominating. And if he does, he could turn the 2022 NFL Draft wide receiver hierarchy upside down.