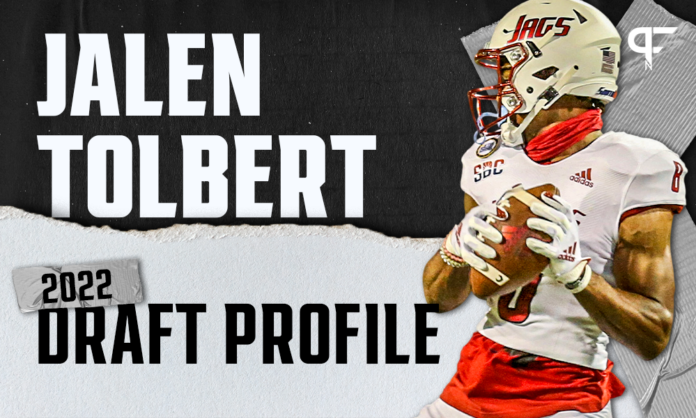 As his scouting report shows, South Alabama WR Jalen Tolbert has the physical and mental tools to be a top NFL Draft prospect in 2022.

South Alabama WR and NFL Draft prospect Jalen Tolbert returns in 2021 as college football’s leading receiver. Can Tolbert take his scouting report to the next level and challenge for an early selection in the 2022 NFL Draft? Let’s take a look at his skill set and how it might translate to the NFL.

There’s a reason that Tolbert is at the top of the board, and it’s not because of his surroundings or his support system. It’s because of Tolbert himself, who has the skill set and drive to supersede his competitors. How does Tolbert stack up as a 2022 NFL Draft prospect? Let’s dive in.

The dynamics of wide receiver-cornerback battles are incredibly complex. But one trait that matters in any situation is athleticism. Athletic players can simply do more, and Tolbert fits this description. Tolbert has a long, lean, and compact frame at 6’3″, 190 pounds, but he’s also an impressive mover for his size.

Tolbert has excellent twitch and suddenness off the line. He can stack crisp feet motions to earn early separation, employing short bursts of energy in rapid succession. The South Alabama WR possesses a great deal of potential energy as a lateral mover, and he creates displacement with ease.

In short areas, Tolbert is exciting. He also shows pronounced upside in space. Tolbert has strong explosiveness when he has a runway, and he has terrific long speed for his size. He uses this long speed to stack defensive backs and gain leverage downfield. And with the ball in his hands, he flashes slippery run-after-catch ability.

Tolbert’s athleticism also shows up at the catch point. He adjusts to inaccurate passes with exceptional quickness. Additionally, the South Alabama WR has shown off stellar body control and acrobatic ball-tracking ability on more than one occasion.

Tolbert’s game wouldn’t be the same without his combination of size and speed. Nevertheless, the South Alabama WR enriches his scouting report with impressive executional traits as well. This shows up most often in his route running, where he has the capacity to be brisk, detailed, and unpredictable.

Tolbert is a fairly methodical route runner who knows how to exploit defenders and break free. His footwork is strong, and he’s shown he can use a multitude of releases at the line, including a dead leg move to manipulate spacing. Tolbert also uses head fakes to manipulate leverage against cornerbacks and displays situational awareness ahead of route stems.

Down the field, Tolbert’s strengths continue to rack up. The South Alabama WR can separate in the intermediate and deep ranges with quick, savvy double moves. He also has an understanding of leverage in this realm. At the catch point, Tolbert can use his 6’3″ frame to box out defenders in tight situations. He proactively uses his length to extend his catching radius and actively guides the ball in with his hands.

Among other things, Tolbert can gather the ball without losing any speed in RAC situations. Moreover, he brings an attitude on the field — a necessary component for mental warfare on the boundary.

Tolbert is one of college football’s best receivers heading into 2021, but if he wants to lock down early-round status, these are the things he needs to work on. Most notably, Tolbert could continue to refine his route running and play to his physical maximum more consistently.

Tolbert is a good route runner as it is, but he could afford to sink his hips more during direction changes to maximize efficiency. His lacking hip sink sometimes inhibits his freedom of motion, especially on in-breaking routes. He’s shown to have the capacity to sink his hips, but he needs to be more consistent.

Additionally, Tolbert rounds off his route breaks at times. But conversely, he also overthinks his routes and plays into the defender’s leverage with his lateral quickness. Going further, Tolbert can better employ physicality in conjunction with his footwork and twitch. His lateral mobility gives him some utility against press coverage, but he’ll need to be more proactive and physical at the NFL level.

Continuing with areas for improvement, Tolbert can sometimes be susceptible to focus drops. Although he has great contested-catch ability, his hands aren’t always as strong or consistent as desired. He’s also not a great run blocker, although he is willing in that department.

Coming into 2021 as a redshirt senior and set to be a 23-year-old rookie, Tolbert still has a few areas to refine in his game. Minimizing focus drops will be an important task this year, as will further perfecting his route running. Nevertheless, looking at his profile as a whole, all of his negatives are minor. Meanwhile, his mix of athleticism, size, and three-level ability makes him an incredibly exciting player.

The entire Pro Football Network staff is high on Tolbert, but none more so than Cam Mellor, who had the following to say about the South Alabama WR:

“[Jalen] Tolbert is the prototypical wide receiver for any NFL offense in 2021 and beyond. He creates separation pre-snap with his eyes and understanding of defenses just as he creates separation from defenders with routes. He has tremendous straight-line speed for his size, yet doesn’t lose speed in his cuts. He’s a dependable YAC threat with terrific hands, who is an exceptional high-pointer of the football. He’s the total package outside.”

My evaluation of Tolbert aligns closely with Mellor’s. Although I believe his hands can be more consistent, there’s nothing to suggest he can’t be an NFL starter — and a productive one at that. The 2021 season is big for him, but Tolbert has all the traits necessary to ascend.

Tolbert has worked for everything he’s gotten, and there’s no better proof of that than where he began. A product of Mobile, Alabama, Tolbert was unranked on ESPN’s 2017 recruiting board. He was ranked on 247 Sports but only esteemed as a two-star recruit.

Despite his low rating, Tolbert earned offers from an assortment of schools. He originally committed to Jacksonville State early in his recruiting cycle but reopened his recruitment when teams like Ball State, Massachusetts, Vanderbilt, and Michigan State showed interest.

Those offers, however, weren’t enough to sway Tolbert from his hometown team — the South Alabama Jaguars.

Tolbert was set to see the field as a true freshman, but the South Alabama WR suffered a season-ending knee injury in his opening scrimmage. He’d ultimately be sidelined until 2018. Tolbert then had to reset as a redshirt freshman, still needing to acclimate to the college game.

2018 was just that — a year of acclimation. Tolbert only caught 5 passes, but his experience that season helped set up a much more productive 2019 campaign. In 2019, Tolbert started in all 12 games, amassing 27 catches for 521 yards and 6 touchdowns. It was a drastic leap in production. However, it would pale in comparison to his 2020 showing.

Last year, Tolbert was borderline dominant in the Sun Belt Conference. He accounted for approximately 40% of his team’s receiving production, accumulating 1,085 yards and 8 touchdowns on 64 receptions. He was a first-team All-Sun Belt selection for his play and placed on the Biletnikoff Award watch list for the 2021 season.

By now, Tolbert is already an established presence. He’s a legitimate 2022 NFL Draft prospect, and he’s on the Reese’s Senior Bowl watch list for the upcoming offseason. But don’t expect Tolbert to stop working simply because of how far he’s come.

His work ethic is renowned, and that’s become clear even to offensive coordinator Major Applewhite, who was hired late last year. In Applewhite’s own words, courtesy of Pro Football Network’s Cam Mellor:

“What a joy it is to work with Jalen [Tolbert]. Day in and day out, he has a smile on his face to go along with an incredible work ethic. He is always trying to learn more about the layers and details of what you are doing. Obviously, his skill set speaks for itself, but he has opened himself up to coaching from coach Michael Smith — who has coached a lot of great wide receivers — and continued to learn every day.”

The work isn’t done for Tolbert, but that isn’t lost on him. Refusing to rest on his laurels, Tolbert has a chance to become one of the top receivers in the 2022 NFL Draft, so long as he takes advantage of his opportunity in 2021.