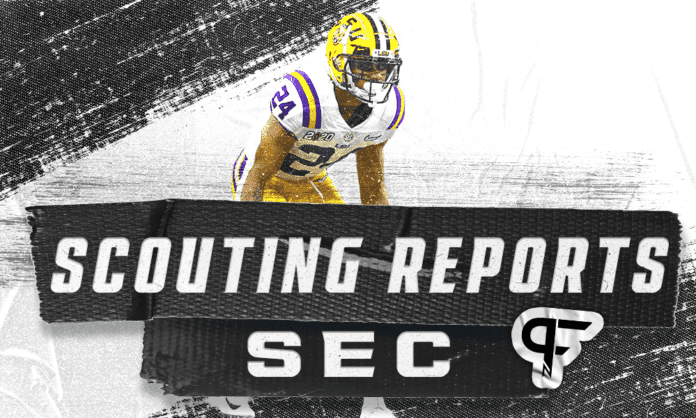 Tony Pauline continues his annual Preseason Summer Scouting series with scouting reports on the 2022 NFL Draft prospects from the SEC.

With the 2021 NFL Draft behind us and the college football season around the corner, it’s time to set our eyes on the next group of NFL hopefuls that could be available next April in the 2022 NFL Draft in Las Vegas. As such, in this edition of my annual Preseason Summer Scouting series, we’ll take a look at the draft prospects and scouting reports from the SEC.

All of my SEC previews are below. To view my grades and projected draft rounds for SEC draft-eligible prospects, scroll to the end of the article.

Who are the 2022 NFL Draft prospects to watch from each team in the SEC?

Alabama is what the Miami Hurricanes used to be — a team that wins national titles and puts four or five players into the draft’s initial round with regularity. And while Alabama is still stacked with talent, unlike previous years, I don’t see any sure-fire early first-round picks coming from the Tide next April.

Now that I’ve got your attention, let me say that I have three prospects from the Tide, all underclassmen, graded as fringe first-round picks, starting with offensive tackle Evan Neal. The big blocker will move to the left side this season after holding down the right tackle spot a year ago. He possesses excellent size and decent mobility and blocks with terrific fundamentals. If Neal shows well at left tackle this year, I expect him to make a meteoric rise up draft boards.

John Metchie III is the next top-flight receiver prospect coming out of Alabama. Metchie is a legitimate deep threat, who also catches the ball incredibly well. He displayed great improvement in his game last season after stepping in for the injured Jaylen Waddle. Like his teammate, Metchie’s stock could soar with another terrific season.

Linebacker Christian Harris was a big-time defender for the Tide last season and showed himself to be a legitimate three-down player. He’s terrific in coverage and stands out in pursuit, and he’s not bad on the blitz either. Harris lacks classic size, but the league is not averse to undersized linebackers as shown in recent drafts.

Jahleel Billingsley is either an oversized receiver or undersized tight end, depending on your point of view. He’s an athletic pass catcher who gets down the field with ease and displays consistent hands. Billingsley reminds me a lot of former Alabama tight end Irv Smith Jr.

Cornerback Josh Jobe has nice size, a stout build, and runs well. He’s a physical corner who needs a lot of work on his game, and Jobe’s instincts are suspect.

After years of subpar results, things seem headed in the right direction for Arkansas. The Razorbacks’ results in the draft have been better than their win-loss record, which should also improve.

Arkansas’ top prospect is John Ridgeway, a transfer from Illinois State and one of my favorite small-school prospects the past two years. Ridgeway has the physical skills, football ability, and intensity to play on Sundays. He’s large, strong, and incredibly intense. Ridgeway also shows great quickness and playmaking skill on the field. I presently grade Ridgeway as a fourth-round prospect, but he could move into Day 2 with a good season.

Myron Cunningham is another large lineman, though on the scoring side of the ball. He’s strong, relatively light on his feet, and blocks with solid fundamentals. While he lines up at left tackle for Arkansas, Cunningham projects to the right side on Sundays.

Auburn is a team under new management, as Bryan Harsin takes over as head coach. The program has had a lot of success in recent drafts, most of it coming on the defensive side of the ball. That will continue.

Redshirt sophomore pass rusher Colby Wooden is my top prospect on the Auburn roster. He’s an explosive athlete who effectively rushes the passer out of a three-point stance and standing over tackle. Wooden plays with great speed, quickness, and agility. He has huge upside.

Roger McCreary is a physical bump-and-run corner with a stout build and an aggressive game. He physically beats down opponents defending passes and fires upfield to voluntarily defend the run. Where he struggles is making plays with his back to the ball, as McCreary is always — and I mean always — faceguarding opponents.

While most scouts I’ve spoken with stamp McCreary as a potential second-round pick, I grade him a frame later. His inability to make plays with his back to the ball is a red flag.

Two more Auburn defenders grade as third-round prospects on my board, starting with linebacker Zakoby McClain. The senior is an undersized run-and-chase linebacker who makes plays all over the field.

Junior safety Nehemiah Pritchett is another who makes plays sideline to sideline against the run and pass. I like Pritchett’s cover skills, and he’s shown himself not to be a liability over the slot receiver.

Georgia transfer Brenton Cox Jr. also has terrific size and is a forceful linebacker who displays outstanding speed moving in every direction of the field. He’s a forceful defender with great upside, and I expect his best football lies ahead of him.

Zachary Carter is an athletic defensive end who gets up the field with speed and also shows the ability to make plays in space or pursuit. Carter comes with nice growth potential and has shown a lot of progress the past two seasons.