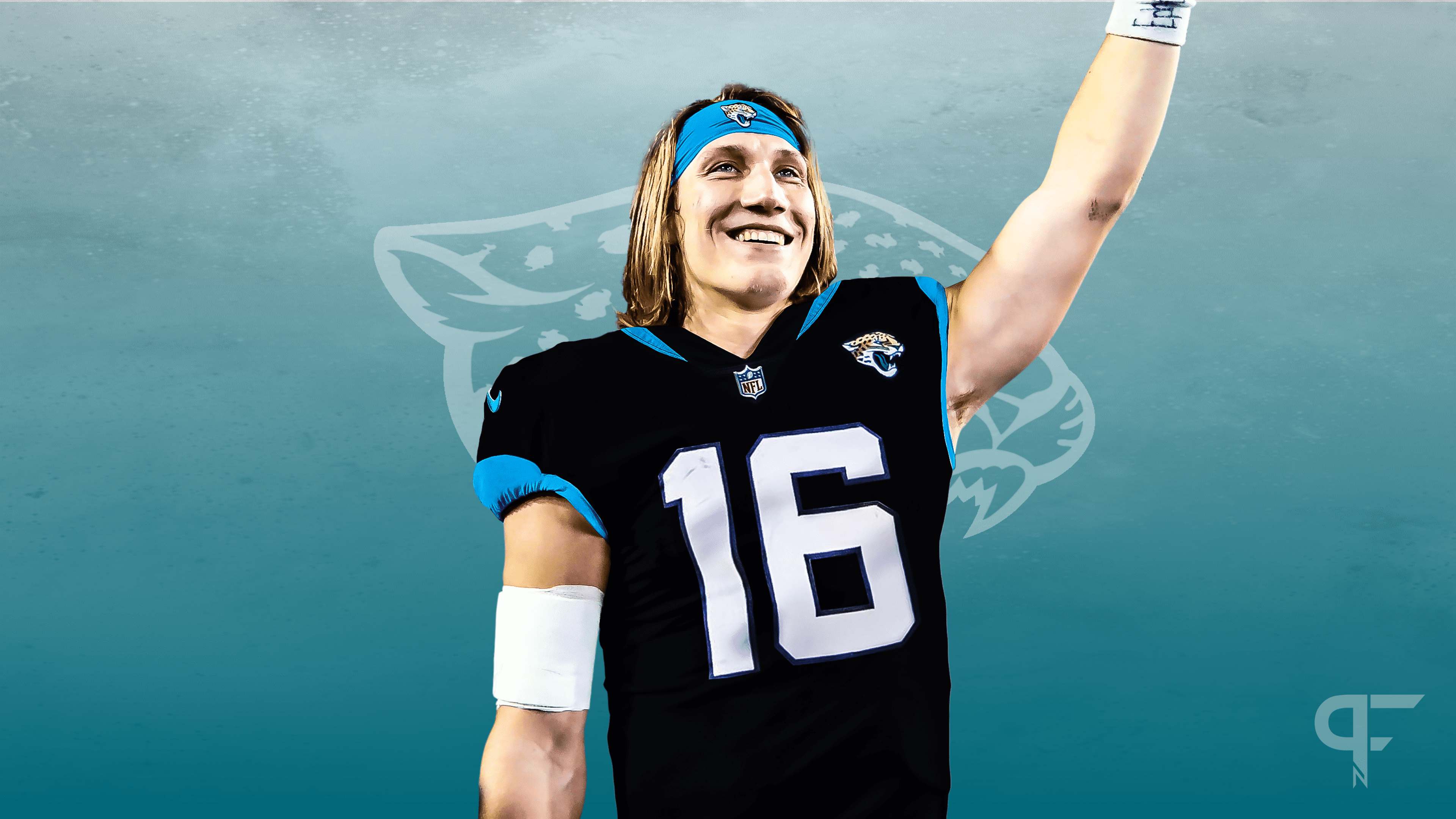 The Raiders will likely be picking in the top 15 this time next year with holes all over the roster. No selection rights the ship, but Trevon Moehrig immediately upgrades the secondary.

Gus Bradley is the new DC in town, and he hails from the esteemed Seattle Cover 3 tree. Meaning, he will utilize one deep safety over the middle, a role neither Johnathan Abram nor Karl Joseph excels in. Moehrig primarily saw time in a split-safety alignment at TCU, but his downfield playmaking allows him to translate to a single-high position.

Jeremiah Owusu-Koramoah is the most fluid coverage linebacker in the class. He can move out to the slot and cover receivers or stay inside and shadow tight ends and running backs. To unlock his maximum potential, a team would need to use JOK in a versatile role. Who better to do that than Brian Flores, having studied under Belichick?

With no first-round caliber QBs remaining in this NFL Mock Draft, Washington goes all-in on the 2021 season. Their secondary could use an injection of talent, but it is not an immediate need with the front seven being so dominant. Instead, Ron Rivera provides Ryan Fitzpatrick with yet another weapon to target. Minnesota’s Rashod Bateman is one of the few outside receivers in this class that I feel confident will translate seamlessly to the NFL.

The Bears are starting Andy Dalton next season, which may be an upgrade over Mitch Trubisky. Nevertheless, Chicago has a talented roster, especially on the defensive side. Chicago bolsters a strength and adds Greg Newsome to their cornerback room to replace Kyle Fuller. Newsome,  like Surtain, possesses a skill set that is scheme-independent.

Pairing him with Jaylon Johnson gives the Windy City a first-class 1-2 punch on the boundary.

Out goes a 39-year-old statue, and in comes a 28-year-old reclamation project. Carson Wentz has been one of the most sacked QBs during his time in Philadelphia. Despite much of that being his fault — hanging on to the ball too long or leaving the pocket right into pressure –, the Colts need to shore up the left tackle spot after the retirement of Anthony Castonzo.

Samuel Cosmi owns stellar footwork and technique in pass sets. He is battle-tested, and although he requires some bulking up, Cosmi can put Wentz’s mind to rest in the pocket.

Right tackle is an issue after the debacle that was Isaiah Wilson, but the Titans must provide A.J. Brown with a running mate. They signed Josh Reynolds in free agency, but he is little more than a slot/depth piece. Corey Davis developed into a legitimate second option in his fifth year, taking some pressure off Brown.

Terrace Marshall Jr. is no Justin Jefferson, but he does not have to be in Tennessee’s offense. The Titans are going to run the ball 30-plus times a game. What they need Marshall to be is what he was in college. An elite red zone threat with enough speed to stretch the field on occasion.

Let’s face it, even if Wilson is the next Joe Namath, the Jets are not returning to prosperity for at least a couple of years. To help eliminate any outside variables that might hinder Wilson’s evaluation — poor receiver play, constant pressure, sub-par play design — New York selects Teven Jenkins in this First Round 2021 Mock Draft to man the right tackle position.

Jenkins is a monster at nearly 6-foot-5, 320 pounds, and he plays like it. His tenacity is exactly what every OL coach wants from a player. Step 1) draft a star QB, step 2) protect said QB — check and check.

Realistically, the Steelers will draft one of Alex Leatherwood or Najee Harris as both fit the Pittsburgh mold. However, neither move the needle as much as Asante Samuel Jr. Behind Joe Haden and Cameron Sutton is an assortment of mediocre cornerbacks. Samuel is small — 5-foot-10 and just over 180 pounds — but he is a replica of his father, who, despite a similar stature, proved to be an elite corner.

The younger Samuel can stick in the slot to begin his career, but I wholeheartedly believe he has the skill set to play on the outside.

If I were the Jaguars general manager, I would not be confident in either of my tackles — Cam Robinson and Jawaan Taylor. Yet, there are no exceptional OTs left on the board. Accordingly, Jacksonville pivots and takes Washington standout, Elijah Molden.

Former Ravens’ DC Joe Cullen brings along the ideology he followed while in Baltimore. The Ravens hardly ran out of base, routinely utilizing nickel and dime packages. Molden can play from a two-high look on base downs but drop into the slot in these formations, offering Cullen a flexible piece in the backend of his defense.

I can make a Draft Day joke involving Vontae Mack, but the real joke is how long it has been since the Browns had a stalwart at the position. Nick Bolton doesn’t have the physical gifts of a Parsons or JOK, but he is a football player. The Missouri LB is a heat-seeking missile in the middle of the defense and will instantly enhance a defense that already boasts Myles Garrett, Denzel Ward, Jadeveon Clowney, John Johnson, Greedy Williams…I can go on forever.

The Ravens are sprinting their draft card up as the best edge rusher falls to No. 27 in this 2021 First Round NFL Mock Draft. Kwity Paye will fill the shoes left by Matthew Judon and Yannick Ngakoue admirably. Baltimore knows a thing or two about manufacturing edge talent, making this the No. 1 landing spot for any pass rushers in the draft, let alone the best of the bunch.

The top defensive tackle in the draft finally comes off the board at No. 28. Christian Barmore‘s fall is not due to his play, rather the value of the position he plays. The Alabama product is the most proven DT that will be drafted this year. He dominated a Notre Dame offensive line that was a finalist for the Joe Moore Award in 2020, given to the top OL unit in the country.

Another team overjoyed with how the draft has fallen thus far, the Packers snatch Ole Miss receiver Elijah Moore. Allen Lazard and Marquez Valdes-Scantling demonstrated their value last season, but Moore quickly raises the group into the upper class. Moore started in the slot under Lane Kiffin, yet there is a trend in college where coaches put their best receivers there as it is an offensive cheat code.

It has yet to be seen if  Moore can excel on the outside, but Green Bay should give him every chance to prove it. Nonetheless, the Packers finally give Aaron Rodgers the weapon he has been longing for opposite Davante Adams.

Jayson Oweh put on an absolute show at Penn State’s Pro Day. He dazzled scouts and fans alike, running a 4.36 40-yard dash at 6-foot-5 and 257 pounds. To add further context, Saquon Barkley ran a 4.40 in 2018. The Bills have been searching for Jerry Hughes’ partner in crime for so long that at this point, they are drafting his replacement — sorry, Jerry.

Originally, I had the Chiefs taking Notre Dame’s Liam Eichenberg here. Since they traded the No. 31 pick, 2021 third and fourth-rounders, as well as a fifth-round selection in 2022 for Ravens OT Orlando Brown Jr., Baltimore is now on the clock. Having already selected the best edge rusher in the class, the Ravens address the trenches on the opposite side of the ball.

Alabama’s Alex Leatherwood is a stout run blocker with some question marks in pass protection. He is a perfect fit for Baltimore’s zone-blocking system due to his natural movement skills and footwork. Not only did he help lead the Crimson Tide o-line to a Joe Moore Award in 2020, he finished his collegiate career with the Outland Trophy in hand, bestowed upon the nation’s top interior lineman on either side of the ball.

Not too much to say about the last pick in this 2021 First Round NFL Mock Draft. The Buccaneers do not have any apparent needs, so they go with the best player available. Azeez Ojulari joins a pass-rush unit already home to Shaq Barrett, Jason Pierre-Paul, Vita Vea, and Ndamukong Suh — good luck NFC South QBs.