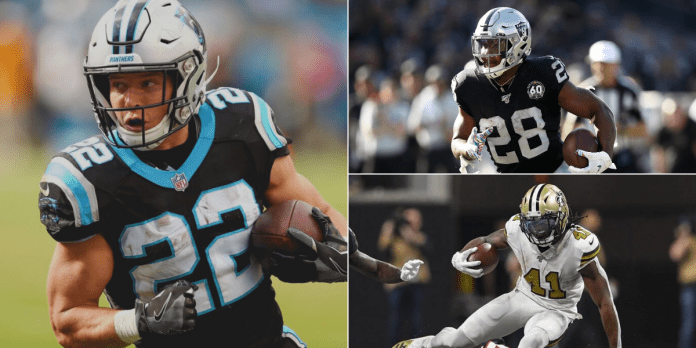 There is a growing belief, most notably in the analytics sector of football analysis, that running backs don’t matter. Unlike in previous decades, this position isn’t drafted as often in the first round or routinely given large second contracts anymore. However, if you ask any NFL head coach or play caller if they think this position “matters” on game day when they are on the road in a dogfight of a game, they will all answer the same. That being said, without question, the ability for a running back to affect the passing game is now of extreme importance and such a skill is reflected in how these players are ranked below. Here is a list of the top 25 running backs in the NFL heading into the 2020 season.

Top 25 running backs in the NFL

Coleman is a smooth mover with a longer stride than most running backs and can eat up grass when he gets in the open field. He also has plenty of passing game acumen. Is he a tease or has he just not put it all together quite yet? With his high pad level and just average change of direction, Coleman is more likely a tease. But Kyle Shanahan sure likes him.

Mack doesn’t have special qualities, but he is solid in all areas (although it is a little startling that he only caught 14 passes last year). He certainly is aided by running behind one of the best offensive lines in the NFL. With the exception of his pass protection, Mack did improve last year, though. But this will be Jonathan Taylor’s backfield soon enough and Mack could be playing elsewhere next year.

Mostert isn’t the biggest or most powerful, but he doesn’t mess around with the ball in his hands. He hits the hole hard and gets every inch he possibly can and has the ability to break off a long run. That is exactly what Kyle Shanahan wants in this system.

It is very easy to blame the Rams offensive line for their woes last year running the football, but the reality is that Gurley deserves a great deal of the blame. He just doesn’t have the explosion that we saw from him a few years ago. Hopefully, the Falcons can keep him fresh, but there is a real chance that Gurley falls off this top running backs list completely next year. Gurley has scored 54 touchdowns over the past three years, though. 54.

Ingram’s production on the ground indicates that he should be higher on this list, but the scheme he plays in with the Ravens and having quarterback Lamar Jackson in the backfield with him aids Ingram a great deal. Still, he is quick to get downhill, is decisive, and finishes runs with aggression. JK Dobbins might go past Ingram, the oldest player on this list, on Baltimore’s depth chart by midseason, though.

There is a lot of ability here with Sanders and there is a very strong chance that he is ranked far higher than this next year. But Sanders is still a work in progress and just isn’t all that proven compared to the other top backs in the league right now. We shall see, but his situation is very encouraging.

Many like to rip into Bill O’Brien for taking on Johnson’s large contract while trading star wide receiver DeAndre Hopkins. And there is merit to such criticism. But Johnson was playing quite well for the Arizona Cardinals before his injury, especially as a receiver, and obviously Houston is confident that they can get quite a bit more two-way production from Johnson in his new home.

Bell and Johnson had to be ranked right next to each other. It wasn’t long ago that these were the best two running backs in the league with their rare combination of size, running and receiving skills. Bell certainly wasn’t aided by his situation at all last year with the New York Jets, but it is also safe to say that he doesn’t have the juice that he showed with the Pittsburgh Steelers.

Fournette caught 76 passes last year, but while that is great and certainly useful, the degree of difficulty on those receptions wasn’t particularly high. Still, this is a big and fast and powerful runner. It is shocking that Fournette could only find the end zone three times in 2019, but that is unlikely to be a trend. He is also a candidate to be traded during the season.

Conner fits the typical Steelers type of power back. He has also developed quite well in the passing game as both a pass protector and a receiver out of the backfield. When right, Conner is highly productive and a handful to get on the ground. But that is the rub — staying healthy is the biggest worry here, without question.

Basically a part-time player for the Miami Dolphins and at Alabama, Drake took the Cardinals starting running back job by the throat last year and Arizona then paid him accordingly. Drake isn’t a bruiser, but in Arizona’s wide-open attack that spreads the field, his big-play ability is on full display. Drake is a game-changer.

Of the top 25 running backs in the NFL, Carson comes in ranked 14th. Not overly dynamic, he was the NFL’s fifth-leading rusher last year. He runs very hard with a no-nonsense style that head coach Pete Carroll adores. Although Carson isn’t very nifty, he has the fifth-most rushing yards in the league over the past two years. He does need to cut down on the fumbles and durability is a bit of a concern here, though.

Obviously Hunt would be the lead back for a high percentage of teams around the league. He has outstanding contact balance and is highly effective in the passing game. In fact, Hunt might assume the role of Cleveland’s third wide receiver and we shouldn’t be surprised if Hunt and Nick Chubb see the field at the same time quite a bit in 2020. Hunt is also outstanding in pass protection.

With all respect to Phillip Lindsay, expect Gordon to take over Denver’s backfield. Gordon is a better receiver and better in protection than Lindsay, and has shown the ability to handle a large workload. This is just a high quality all-around running back that could really aid in Drew Lock’s development at the quarterback position.

Ekeler can compete with any player on this list from a receiving standpoint and is often asked to run wide receiver routes. Ekeler also showed last year that he is more than just a peripheral option and can be a focal point of an NFL offense. He’s a difference-maker.

Next Page: Top 10 running backs in the NFL