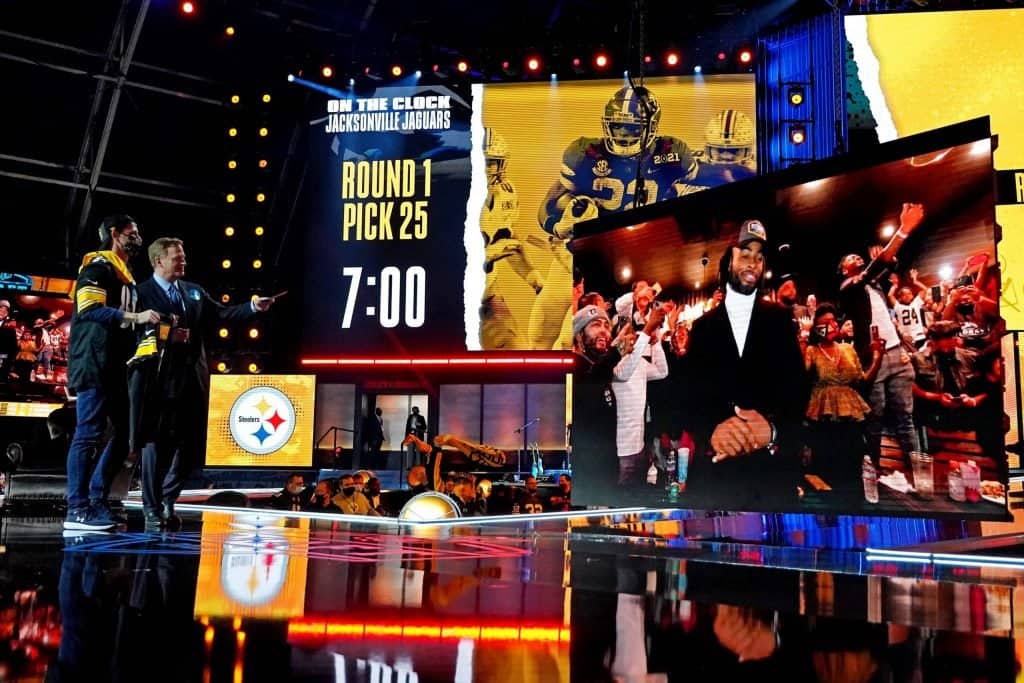 Apr 29, 2021; Cleveland, Ohio, USA; Najee Harris (Alabama) with NFL commissioner Roger Goodell over video call after being selected by the Pittsburgh Steelers as the number 24 overall pick in the first round of the 2021 NFL Draft at First Energy Stadium. Mandatory Credit: Kirby Lee-USA TODAY Sports
What's in this article? Click to show
Which running backs were drafted in the 2021 NFL Draft?
How many running backs were drafted in 2021?
Want 2022 NFL Draft prospect news? Want to do your own mock draft?

Which running backs were selected in the 2021 NFL Draft? Who were the teams that drafted them, and how does this class compare to previous years?

Which running backs were drafted in the 2021 NFL Draft?

Let’s take a look at the running backs selected in the 2021 NFL Draft.

Much like the selection of Trevor Lawrence as the first quarterback selected in the 2021 NFL Draft, there was little surprise when the Pittsburgh Steelers took Najee Harris. Harris and the Steelers had been linked numerous times heading into the draft, and they confirmed that with the 24th pick.

Harris took over the lead role in the Alabama offense as a junior. In his final two seasons, he scored 39 rushing touchdowns, 11 receiving touchdowns, and added 3,419 total yards. Harris will provide the Steelers with a potential three-down back who can contribute in both elements of the offense.

Immediately after the selection of Harris, the Jacksonville Jaguars reunited Travis Etienne with his college quarterback. Etienne was not as impressive in the run game in his senior season, averaging over 2 yards per attempt fewer than his sophomore and junior campaigns.

Nevertheless, Etienne’s role in the passing game expanded impressively in his final year. He took huge strides as a junior, pulling in 37 receptions for 432 yards and 4 touchdowns. In three fewer games in 2020, Etienne managed 48 receptions for 588 yards and 2 touchdowns. During his college career, Etienne posted 6,107 yards from scrimmage and 78 total touchdowns.

Javonte Williams was one of the biggest risers of the 2020 college season. After posting steady but unspectacular numbers in his first two seasons, Williams exploded as a junior.

After seeing his playing time dwindle in 2019 at Oklahoma, Trey Sermon revived his career following a transfer to Ohio State. He averaged 7.5 yards per attempt, finishing with 870 yards on 4 touchdowns on 116 attempts. While his overall numbers do not compare to some of the others on this list, he enjoyed an impactful finish to his college career.

In the three games against Michigan State, Northwestern, and Clemson, Sermon flashed his immense potential. On a total of 70 carries, Sermon rushed for 636 yards (9.1 yards per attempt) and 4 touchdowns. That strong finish helped him to become the fourth running back off the board in the 2021 NFL Draft.

After a solid junior season, Michael Carter impressed as a senior. On 156 carries, Carter averaged 8 yards per attempt en route to 1,245 yards and 9 touchdowns. He added 25 receptions for another 267 receiving yards and 2 scores, culminating in 1,512 total yards and 11 touchdowns. With the Jets’ backfield up in the air, Carter has the opportunity to be a lead back in the NFL as a rookie.

This is a fascinating group of athletes in the back half of the top 10. Both Kenneth Gainwell and Chuba Hubbard entered the 2020 season with the potential to be among the first backs selected in the draft. However, Gainwell opted out of his senior season due to personal tragedies, and Hubbard struggled to make an impact on the field, managing just 677 yards from scrimmage.

The selection of Kene Nwangwu was the biggest surprise at the running back position in the entire 2021 NFL Draft. Nwangwu posted just 744 rushing yards and 57 receiving yards during his college career. Still, he specialized in kick returns, with close to 2,500 return yards in his career.

Running backs selected in the 2021 NFL Draft | Round 6

This group of running backs largely went in the region they were expected to be selected during the 2021 NFL Draft. On his big board, Pro Football Network’s Chief Draft Analyst Tony Pauline rated Elijah Mitchell as a fourth-round selection. In contrast, Pauline had Gary Brightwell as a projected undrafted free agent. Brightwell never saw more than 100 carries in a single season in his career at Arizona. He finished his career with a total of 1,305 rushing yards and 9 touchdowns.

Demetric Felton was one of the more recognizable names from the group after he put together an impressive performance at the Senior Bowl. Felton offers an element in both the run and pass game. At UCLA, he pulled in 99 receptions on top of his 233 carries. He finished his career with 2,059 total yards and 15 touchdowns.

At the back end of Round 6, Khalil Herbert provided an intriguing value for the Bears. Projected by Pauline to be a fourth-round pick, Herbert was Pauline’s second highest-ranked running back available at the time, behind Javian Hawkins, who would go undrafted.

Running backs selected in the 2021 NFL Draft | Round 7

Of these four selections, only Gerrid Doaks was projected as a potentially undrafted player. Landing with the Dolphins is a fascinating spot for Doaks since there is no clear leader in that backfield. Kylin Hill and Jermar Jefferson were both values according to Pauline’s grades pre-draft.

How many running backs were drafted in 2021?