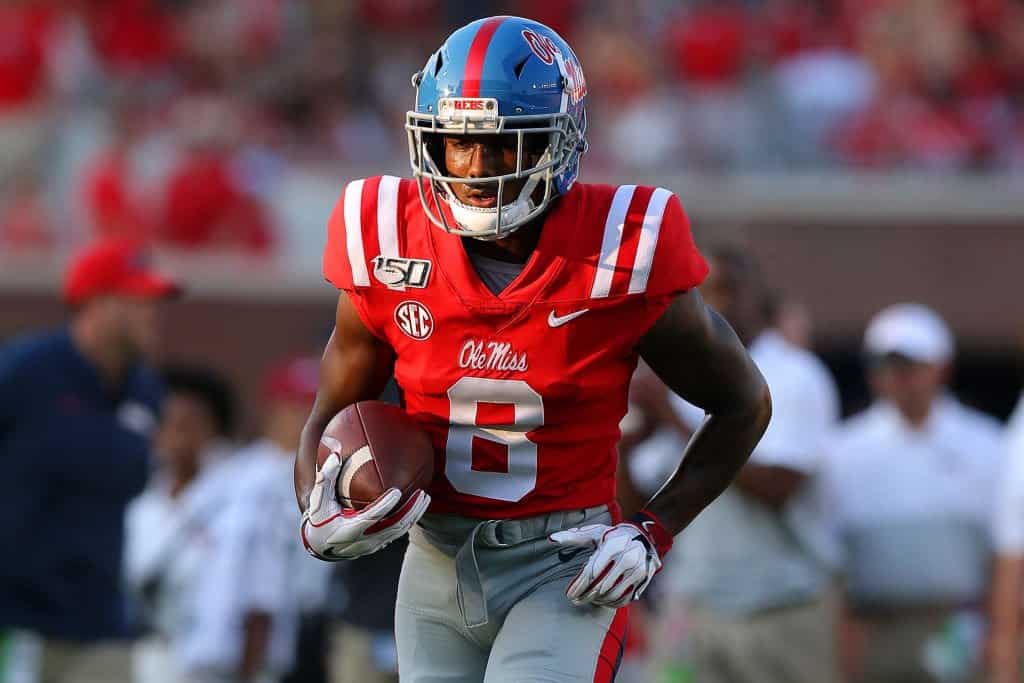 Hot take: Rondale Moore might not be the best “Moore” at the wide receiver position in the 2021 NFL Draft. Kidding — well, kind of. Purdue’s variant still holds the advantage in established name recognition. But further south, playing for the Ole Miss offense, Elijah Moore has made his case to be a legitimate second-round pick in the NFL Draft. With every game played, his stock only rose further. What makes Elijah Moore such an enticing draft prospect, and how far can he ascend?

Positives: Explosive home-run-hitting skill player who consistently turns in big plays whenever the ball is in his hands. Fires off the snap, quickly gets in and out of breaks. Stays low on exit, positioning himself to make the reception. Separates from defenders through route running or speed. Displays soft hands, extends to make the reception away from his frame, and plucks the ball out of the air.

Displays good eye/hand coordination as well as concentration. Comes back into the clearing to make himself an available target, finds the open spot in the defense, and gets vertical in a crowd to come away with the catch. Nicely adjusts to the errant throw. Gives effort even if he’s not involved in the play.

Negatives: Not a sturdy receiver and is easily taken down at the point by a single defender. Struggles in battles and will struggle handling press coverage at the next level.

Analysis: Moore is coming off a terrific campaign and was unstoppable at times last season. He has size and height limitations that will be a red flag for some teams, but his speed, quickness, and ability to produce as a receiver and a return specialist as well as running reverses is very attractive.

In a way, it was expected that an offensive renaissance would be a byproduct of Lane Kiffin’s arrival at Ole Miss in 2020. However, no one quite expected Elijah Moore to produce the way he did. That’s not to say that Moore wasn’t a promising prospect in the past, however. The marriage between Kiffin and Moore simply lingered far closer to perfection than anyone could have predicted.

Moore was rated highly coming out of high school; he was labeled as a four-star prospect and barely snuck into the top-25 at his position in the 2018 class. He was joined in the top-25 by other top talents like Justin Shorter, Terrace Marshall Jr., Amon-Ra St. Brown, Justyn Ross, Jaylen Waddle, Anthony Schwartz, and Brennan Eagles. Ironically enough, he was ranked substantially higher than both Ja’Marr Chase and Rondale Moore.

A lot of teams caught on to the former Moore’s talent, as the Fort Lauderdale product was presented with scholarship offers from over two dozen teams, including Power Five factories like Alabama, LSU, Ohio State, Wisconsin, Michigan, and Georgia, and other notable schools like Cincinnati and Purdue.

Ultimately, Moore chose Ole Miss, which would prove to become an even better decision than he had anticipated. It took some time for Moore to catch on as an offensive threat. At first, other recruits such as Rondale Moore and Ja’Marr Chase experienced more statistical success.

While Elijah Moore enjoyed modest success as a true freshman, Rondale Moore set the nation ablaze with 135 total touches, 1,471 total yards, and 14 touchdowns. And while Elijah enjoyed a significant bump in production in 2019, Chase made all other receivers seem insignificant with a historic campaign, tallying 1,780 yards and 20 touchdowns on 84 catches.

Coming into 2020, Elijah Moore was an afterthought. But now, with Chase having opted out and Rondale Moore sidelined by injury, it was Elijah’s turn to shine, and that’s exactly what he did.

Over the course of the 2020 season, developed into a premier weapon for Lane Kiffin’s offense, amassing 86 receptions, 1,193 yards, and eight touchdowns in just eight games. Moore hauled in at least ten catches in every game but one, and his consistency speaks to his ability to separate from defenders and find open space.

Moore’s standout 2020 season makes him one of the top slot receivers in the 2021 NFL Draft. But how teams will value his skill set remains up for debate. Moore is tough, savvy, and has enough athleticism. However, even for a slot receiver, he’s pretty small, and his size will limit his versatility. He can’t beat press consistently with his lack of length. But Moore is undoubtedly dynamic up the middle of the field. Teams in need of a spark plug in the slot can do far worse than Moore.

Smaller receivers don’t always have the kind of solidity that Moore has in contested situations. In the NFL, where windows are smaller, that, along with his short-area quickness, will serve him well. Even in this deep receiving class, Moore did enough in 2020 to warrant Day 2 consideration as an immediate starter in the slot.

The depth of the 2021 NFL Draft receiver class will present a challenge for Elijah Moore. Nevertheless, he may already be comfortably in the Day 2 conversation. During the 2020 season, he received a very strong vocal endorsement from his coach, Lane Kiffin. Kiffin, a tenured offensive mind with some NFL experience, compared Moore to five-time Pro Bowler and two-time All-Pro receiver Steve Smith.

“This is a first-round slot [receiver],” Lane Kiffin said of Elijah Moore on November 10. “I didn’t coach him, but [Elijah Moore] kind of reminds me of Carolina’s Steve Smith. Just the stop and start ability is so explosive and a great route runner. Even though I didn’t have him, that would be what I would compare him to.”

That’s a heavy, heavy comparison, but it’s one Kiffin wouldn’t make lightly. Particularly, after utilizing Moore at such a high clip in 2020. Moore undoubtedly has much more work to do before he can live up to that comparison. However, there’s no doubt about the sky-high potential that Moore possesses.

NFL teams are always in the market for dynamic receivers. At the end of the day, that’s what Elijah Moore is. He’ll probably have to be relegated to the slot on most of his snaps because his short arms won’t help him against press coverage. But Moore has legitimate game-changing ability with his speed, explosiveness, and elusiveness. On top of that, he’s also an excellent route-runner, a scary run-after-catch threat, and a receiver who can haul in passes amidst contact.

Moore is a complete slot receiver with versatility and dynamic utility. Thus, NFL teams in need of a slot receiver will likely be lining up to acquire his services. When you look at the list, a lot of teams might fall under that category. As many as two dozen teams could be in the market for a player like Moore to improve their receiving corps. Yet, the best fits might end up being teams like the Saints, Eagles, 49ers, Lions, Falcons, and Washington, who have needs specifically in the slot, and would know how to use Moore with the highest efficiency.