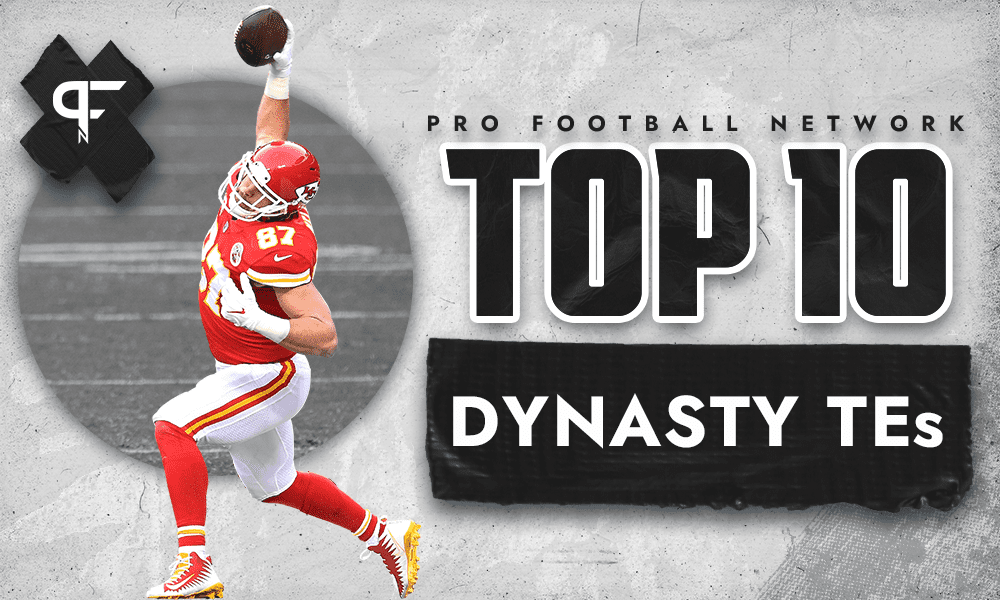 As dynasty fantasy football drafts continue to fire up for the 2021 season, differentiating between the elite players at each position can come down to the slimmest of margins. While factors such as age, production, and the supporting cast all play their part, we are here to help you disentangle all of that and make an informed decision. Here are the top 10 dynasty TE rankings for the 2021 season.

The following dynasty TE rankings are based on PFN’s consensus 2021 dynasty rankings. Please also be sure to check out our 2021 dynasty rookie rankings prior to your fantasy football drafts.

Who are the most consistent playmakers at the TE position? In a shallow player pool, having a reliable starter on your roster can give you a considerable advantage each week.

Mike Gesicki has served as both the Miami Dolphins’ tight end and primary slot option for the past two seasons. Having spent over 90% of his snaps split out wide, Gesicki saw the second-most targets for the Dolphins in 2020 with 85. He recorded career-high totals in receptions (53), yards (703), and touchdowns (6) while playing 58% of the offensive snaps.

In PPR formats, Gesicki finished the fantasy season as the TE7 and averaged 10.6 ppg. Sure, 10.6 ppg at first glance appears low, but consistency is key. The majority of tight ends will not win you leagues, but consistency can be just as hard to find.

Last season, Gesicki benefited from the lack of pass-catching options on the Dolphins’ offense. With Preston Williams missing half the season and the team lacking a WR3, Gesicki proved to be an integral part of the offense. In 2021, Miami addressed this by drafting Alabama WR Jaylen Waddle and signing Will Fuller in free agency. The new additions will push Gesicki down the progression. Nevertheless, he’ll remain a threat in the red zone.

What will be worth watching is the development of contract talks. Gesicki is entering the final year of his contract, and Miami selected Hunter Long during the NFL Draft. Long could be their fall-back option in 2022 and beyond should Gesicki leave in free agency.

Evan Engram finds himself back in our top 10 TE dynasty rankings — somehow. In 2020, Engram did play in all 16 games for the first time in his career. He finished the year with 63 receptions and 654 yards from 109 targets. Statistically, it was Engram’s best output in those categories since he was a rookie in 2017.

However, Engram had just 1 touchdown in 2020 and averaged 10.4 yards per reception — both career lows. His 8.8 fantasy points per game in PPR formats were also the lowest of his career thus far as he finished the year as the TE15.

Nevertheless, Engram — quite possibly on namesake alone — represents consistency in fantasy football. And at a position as barren as tight end, consistency is typically all that you can ask for. In his three seasons prior to 2020, Engram averaged 12.27 ppg. Fantasy managers would love nothing more than for Engram to get back to that kind of consistent rate. If he does, then Engram could see himself move up the rankings of the top dynasty tight ends instead of the other direction.

At 26 years old, he still has appeal in dynasty, but he’ll need to turn it around in 2021. That could prove difficult, however, considering the weapons the Giants have added. In free agency, the Giants made a splash in signing WR Kenny Golladay to a long-term deal.

New York added another pair of wide receivers in signing John Ross and selecting Kadarius Toney with the No. 20 overall pick in the 2021 NFL Draft. Another signing that the Giants made — and one that more directly impacts Engram — was TE Kyle Rudolph to a two-year deal.

Although he dealt with injuries in 2020 and shared the field with another elite tight end, Dallas Goedert confirmed what we all know — he is very good at football.

Since 2018, Goedert has averaged 11.9 ppg when Zach Ertz was unavailable. Furthermore, this is likely to become the new reality should Ertz get traded or even released. Goedert has averaged 6.6 targets per game in Ertz’s absence, which would extrapolate to 110 targets, a number only five tight ends cleared in 2020.

No one has targeted tight ends more over the last two seasons than the Eagles at 34.35%. If Goedert is the only player receiving these targets in 2021, he could push inside the top five dynasty TE rankings.

Despite playing through an ankle injury and dealing with one of the worst QB situations, Noah Fant still manages to give dynasty managers hope for the future. Fant ended the season with 149.3 PPR points in 15 games. Averaging 10 ppg, Fant hauled in 62 of 93 targets for 673 yards and 3 touchdowns.

With Courtland Sutton returning from his torn ACL, Fant’s target share could dwindle. Still, he should be the third option in this passing game and hover around the range of 5-6 targets per contest.

Few TEs in the NFL can lay claim to the athleticism Fant possesses (7.2 yards after the catch per reception). While he may never see 100 or more targets in a season, Fant’s upside — along with youth (23 years old) — places him well inside the top 10 dynasty TE rankings.

If this were redraft, Mark Andrews would be the TE4 for the 2021 season. Yet, in dynasty, we have to look forward and try to project career arcs and what players could be rather than where they are right now.

The Ravens’ wide receiver room over that span was near the bottom of NFL ranks, with the only “notable” receiver being the consistently inconsistent Marquise Brown. They rectified this need by signing Sammy Watkins in free agency and drafting both Rashod Bateman and Tylan Wallace.

Like all other Ravens’ pass catchers, Andrews is limited by the volume at which the team throws the ball. Given their success as a franchise, I would not expect this to change anytime soon. Still, Andrews operates over the area of the field Jackson targets the most. Therefore, he’ll still linger in the mid-80s to the low-90s target range.

The primary issue is, how long will he be on the Ravens?

Andrews is entering the last year of his contract. After the New England Patriots essentially reset the TE market with their free agency signings, Andrews is likely to command a hefty price and have plenty of suitors next offseason. He has the talent to maintain his value anywhere but lacks the upside of others ahead of him in 2021 dynasty TE rankings.