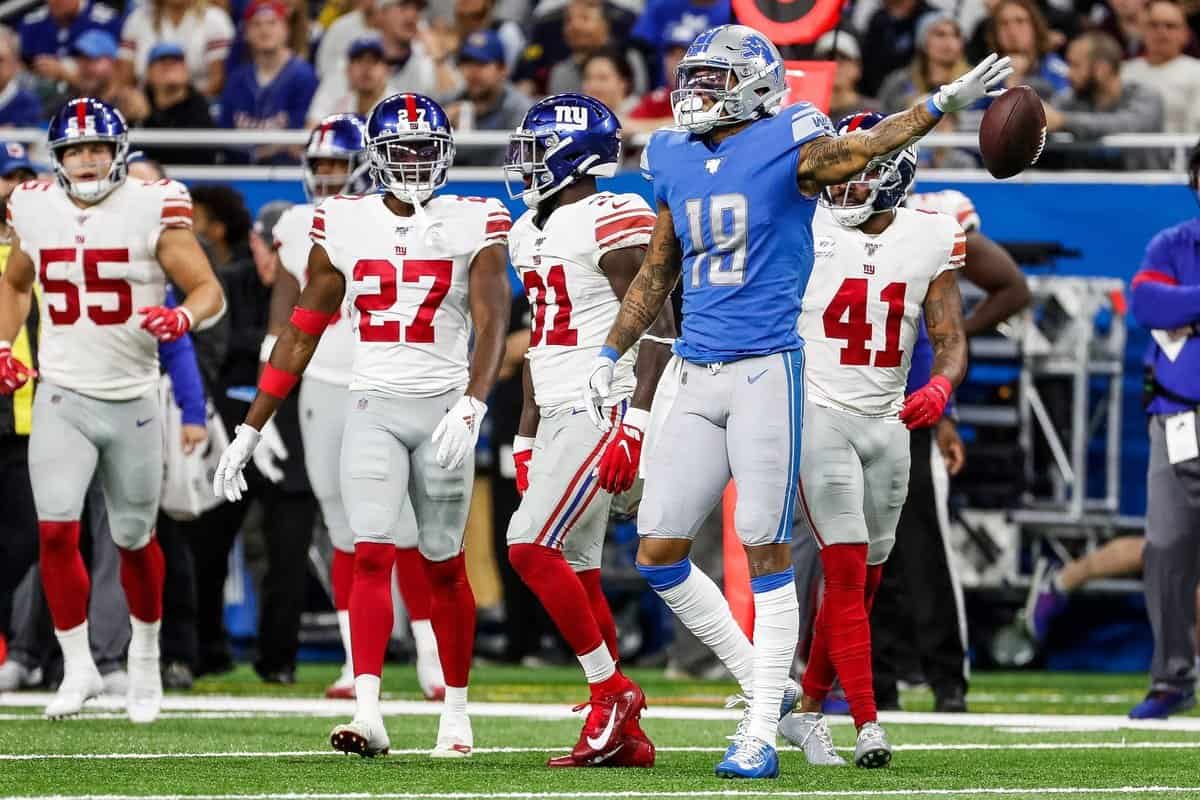 Lions receiver Kenny Golladay celebrates a first down against the Giants at Ford Field, Oct. 27, 2019. Syndication Detroitfreepress
What's in this article? Click to show
Who have the New York Giants signed in free agency?
The New York Giants took care of some of their own players
Want more NFL news and analysis?

After falling agonizingly short of winning the division in the 2020 NFL season, the New York Giants made a few surprise additions in free agency. Let’s take a look at the Giants’ player acquisitions and who they decided to keep (or not keep) on their roster this offseason.

Who have the New York Giants signed in free agency?

The Giants were always an intriguing team coming into free agency. As they enter the third season with Daniel Jones, the Giants need to put talent around him to evaluate whether he is the franchise’s future.

The Giants receiving corps is best described as solid. Their leading receiver in terms of targets was tight end Evan Engram (109). However, Engram wavered with consistency, owning a 57.8 percent catch rate and a massive 10.1 percent drop rate. Behind Engram, Darius Slayton and Sterling Shepard led the wide receivers with 96 and 90 targets each. They finished with a combined 1,407 receiving yards and 6 touchdowns. At the same time, Engram added 654 receiving yards and 1 touchdown.

The concern for the Giants was a lack of a true WR1. Slayton and Shepard are role players, but with Engram too inconsistent to be the top option, the Giants needed to add a major weapon. They did precisely that in signing Kenny Golladay.

While Golladay spent much of 2020 on the sideline due to injury, he posted back-to-back 1,000-yard seasons in 2018 and 2019. Additionally, Golladay scored 11 touchdowns in 2019, to go with 5 in 2018. He gives Jones a big-bodied receiver who can compete for jump balls. The freedom to throw the ball up confidently to a No. 1 receiver will be tremendous for Jones’ development.

The New York Giants paid Golladay an average of $18 million per year on a four-year deal. The contract places Golladay tied-sixth on the list of highest-paid receivers in the league. Of the free-agent receivers signed as of March 23, Golladay received the highest average value by far — the next closest is Corey Davis ($12.5 million per year).

The Giants boosted their cornerback position in free agency

The signing of Golladay was not the end of the Giants’ free-agency moves. After the Tennessee Titans released him, the Giants signed Adoree’ Jackson on a reported three-year, $39 million contract. The $13 million per year average value has Jackson tied for 12th in terms of the highest-paid corners. Jackson is the third-highest-paid corner of the 2021 free-agent class so far.

Jackson is another player the New York Giants have signed in free agency who dealt with injury last season. After playing in 43 games in his first three years, Jackson played in just three games in 2020. In those games, Jackson played poorly. He allowed an 81.3 percent completion rate with 3 touchdowns on 16 targets, finishing the year with a QB rating of 145.8 when targeted.

Yet, Jackson performed better when healthy in 2018 and 2019. He allowed 6 touchdowns in 2018 before reducing that to 1 the year after. On the other hand, his completion rate allowed did jump from 56.5 percent to 66.7 percent.

The Giants have been aggressive in putting Jackson opposite James Bradberry. They hope to get the healthy version of Jackson in 2021. In short, if they get the injured version, this contract could look porous very quickly.

Outside of the headlines of Golladay and Jackson, the Giants were somewhat quiet in free agency. They took a chance on WR John Ross. The No. 9 overall selection in the 2017 NFL Draft has struggled since entering the league. He has managed just 27 games in four seasons, with a catch rate of 41.5 percent.

On the other hand, Ross possesses a huge upside if the Giants can get the best out of him. Thus, this is a fascinating risk for the Giants, with plenty of potential rewards if they can make it work.

The Giants also added a veteran QB in Mike Glennon to replace Colt McCoy. Glennon has plenty of experience, having spent time on five different teams in his eight seasons in the league. Glennon played five games for the Jaguars in 2020. He completed 62 percent of his passes for 1,072 yards, 7 touchdowns, and 5 interceptions.

Based on his career numbers, Giants fans hope that he does not even come close to pushing Jones for the starting role.

The Giants had a few question marks on their roster to sort out heading into the new league year. What approach did they take with their own free agents?

After trading for Williams with the Jets two seasons ago, the Giants placed the franchise tag on him for the 2020 season. As Williams entered the 2021 offseason as a free agent, the Giants franchise-tagged him again. The Giants needed to secure a long-term deal for his services, with Williams playing on the tag next season.

The New York Giants signed Leonard Williams to a three-year contract worth $21 million per year. While his cap number will be just $11 million in 2021, it will rise to $26.5 million in 2022. If the Giants want to release Williams ahead of the 2023 season, it will cost them $7.5 million in dead money.

The Giants made no major additions to their offensive line

Meanwhile, the Giants made no significant offensive line additions despite how big a question mark the group is. In fact, their most notable move was to release guard Kevin Zeitler, who almost immediately signed a contract with the Ravens. In terms of retaining players, the Giants agreed to a new one-year deal with offensive tackle Nate Solder.

The new contract reduces Solder’s salary cap number to $9.5 million in 2021. Furthermore, the deal has a void year after the 2021 season, leaving the Giants with $4 million in dead money next year. What makes this move somewhat surprising is that Solder is potentially not even a starter at tackle in 2021. If Matt Peart develops this offseason, he could start at right tackle opposite Andrew Thomas. Maybe we see Solder move inside and replace Zeitler at guard.