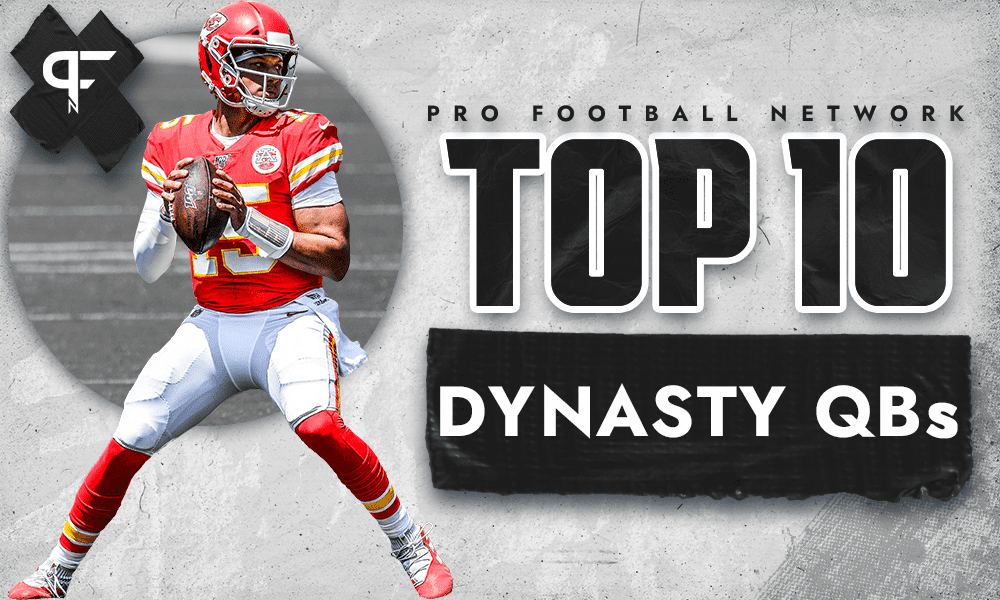 As dynasty fantasy football drafts continue to fire up for the 2021 season, differentiating between the elite players at each position can come down to the slimmest of margins. While factors such as age, production, and the supporting cast all play their part, we are here to help you disentangle all of that and make an informed decision. Here are the top 10 dynasty QB rankings for the 2021 season.

The following dynasty QB rankings are based on PFN’s consensus 2021 dynasty rankings. Please also be sure to check out our 2021 dynasty rookie rankings prior to your fantasy football drafts.

Who are the most consistent playmakers at the QB position? There will be two names that stand out as omissions, and yes, they are on purpose. Just missing out on the top 10 dynasty QB rankings for 2021 are Aaron Rodgers and Deshaun Watson.

Both QBs have too many red flags concerning their situation, either on the field or off of it. If he stays in Green Bay, Rodgers will not change much, possibly moving up to QB10, if anything. Watson, on the other hand, would be QB3 or QB4. However, we have no idea what the outcome will be, and for now, we cannot rank him with any confidence for the 2021 season.

With this out of the way, let’s dive in and kick things off with the QB10 in our 2021 dynasty QB rankings.

Kicking off the 2021 dynasty QB rankings is our first rookie of the bunch in Chicago Bears QB Justin Fields. In fantasy, you must target QBs with a rushing upside. Over the last three seasons, it has become even more of a requirement.

We bring all of this up because there might be no better dual-threat prospect in the 2020 rookie class than Fields. He showed the ability to make every requisite throw at the next level and be a dangerous rusher while at Ohio State. We have zero questions about his talent, and he could be a top-five QB in dynasty rankings in two years. The only concern comes to his situation.

The Bears are an organization in flux and have a head coach and general manager on the hot seat. Matt Nagy has even publicly stated that Andy Dalton is the clear starter for whatever reason.

Nevertheless, talent-wise, the Bears have solid players in David Montgomery, Darnell Mooney, Allen Robinson, and Cole Kmet on offense and a solid defense to keep them in games. Although he may not be the starter in Week 1, it’s easy to believe in Fields’ long-term dynasty value, and it’s why we have him just inside the 2021 top 10 QB dynasty rankings.

If not for his devastating knee injury, Joe Burrow could have pushed Justin Herbert for the NFL Offensive Rookie of the Year Award. From Day 1, Burrow lived up to the billing. Over 10 starts, he completed 264 passes (65.4%) for 2,688 yards, 13 touchdowns, and 5 interceptions. The volume at which the Bengals threw the ball was staggering. In 10 and a half games, Burrow attempted more passes (404) than Lamar Jackson did all season (376).

We all expected them to upgrade their offensive line, but the Bengals said “hold our beer” and selected Burrow’s top receiver from LSU in Ja’Marr Chase instead. From a playmaker standpoint, you have to be excited. Chase, along with Tee Higgins, Tyler Boyd, and Joe Mixon, has the potential to be a competent offense.

It all comes down to whether or not the Bengals can keep Burrow upright. The addition of Riley Reiff will help, but the maturation of Jonah Williams will be pivotal. While not the QB1 of the 2020 class anymore, Burrow is still a top-10 QB in dynasty rankings.

Of the 2021 rookie class, Trevor Lawrence does not have the highest ceiling. We believe that is Trey Lance, followed by Fields. Nevertheless, Lawrence has the highest floor — that is the crucial part. He is as close to “can’t miss” as it gets. It’s also why Lawrence maintains his position as the highest rookie in our QB dynasty rankings.

Lawrence has been anointed since his freshman year at Clemson and has continuously drawn comparisons to Andrew Luck along the way. He ended his career at Clemson with a 34-2 (.944) record as a starter. His two losses came in the College Football Playoffs. In fact, Lawrence did not lose a regular-season game as a starter in either college or high school!

The Jaguars are a team on the rise, and they might be more talented than given credit for heading into 2021. The defense is young and full of budding talent, and on offense, Lawrence has plenty of weapons. D.J. Chark and Marvin Jones will work the perimeter with Laviska Shenault roaming the middle. Shenault has been outstanding thus far in camp and could emerge as the WR1 in the Jaguars’ offense.

Nevertheless, Lawrence always has his college RB in Travis Etienne waiting if none of those options work.

We know that Burrow has “shown it” already where Lawrence hasn’t yet, but the talent and ceiling of Lawrence can’t be denied. Therefore, Lawrence takes the edge in the head-to-head.

How strained is the relationship in Seattle between the team and Russell Wilson? Rumors swirled in the offseason about a potential trade and even went as far as several teams making substantial offers, as they believed Seattle would deal him for the right price.

Can you honestly blame the guy? Since 2014, no QB has been sacked more than Wilson — a staggering 275 times. Yet, quite impressively, despite the pressure, Wilson is sixth in yards (23,996) and first in touchdowns (195) over that stretch.

Perhaps the Seahawks have tried to make amends. They dismissed the run-centric Brian Schottenheimer and signed former Rams passing coordinator Shane Waldron to take over the role of OC. Tyler Lockett signed a long-term deal, and they drafted a likely new slot WR in D’Wayne Eskridge out of Western Michigan with their first pick in the NFL Draft (No. 56).

Wilson will consistently be treated as a QB1 option as he should be. After all, he is a reliable QB who can put up week-winning numbers. Nevertheless, there will be some weeks where he puts up less-than-stellar numbers. If he continues on his path in the latter part of 2020, Wilson could become a fantasy football bust considering his high draft capital.

We rarely see rookie QBs come out of the gates and light the NFL on fire. From 2010-2020, 33 signal-callers were drafted inside of Round 1. Of those quarterbacks, only five finished as a QB12 or better, and only seven inside the top 18. That’s what makes Herbert’s record-setting season so incredible.

What’s scarier to think about is that Herbert might be in an even better situation in 2021. First off, the Chargers exited free agency as arguably the most improved team of the offseason and carried that momentum into the NFL Draft. The Chargers fortified their offensive line by adding Matt Feiler, Oday Aboushi, and Corey Linsley in free agency, then drafted a destroyer of souls in Rashawn Slater at pick No. 13.

The other move that has garnered less attention than it likely deserves is the change in the coaching staff. Anthony Lynn was replaced as head coach by former Rams DC Brandon Staley. Additionally, at offensive coordinator, the Chargers brought in QB guru Joe Lombardi.

Having spent the last five seasons with the Saints, Lombardi will build an offense that directly fits Herbert’s skills. Herbert is surrounded by incredible talent and is a locked-in QB1 in 2021 dynasty rankings.