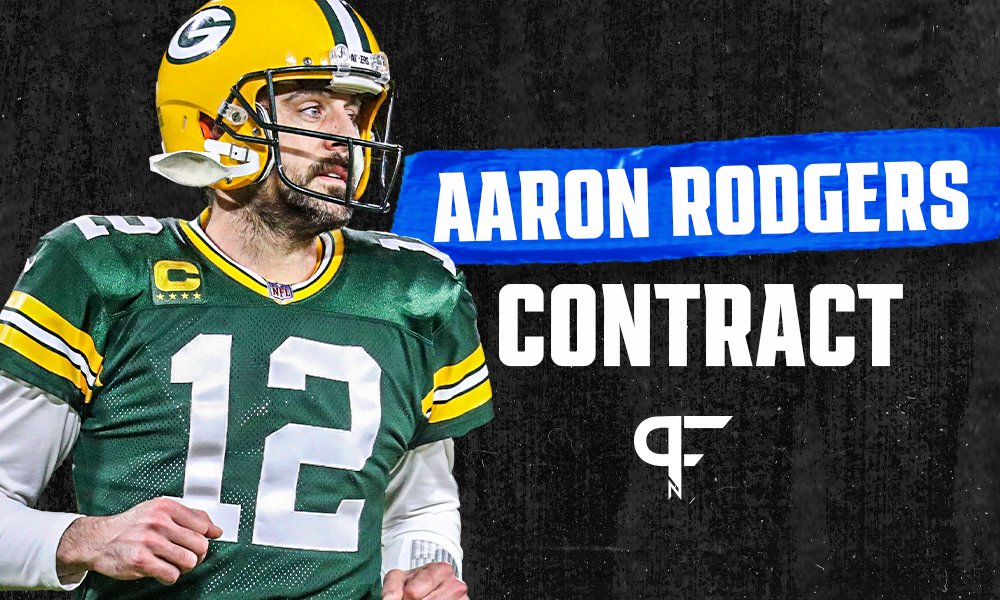 With Aaron Rodgers and the Green Bay Packers agreeing to a re-worked contract, what is the situation with his salary and his future?

By Ben Rolfe
July 30, 2021
What's in this article? Click to show
Aaron Rodgers’ cap hit was set to jump in 2021
How does Rodgers’ salary cap number come about in 2021?
What options do the Packers have with Aaron Rodgers’ contract?
What happens to his contract if Rodgers retires?

After throwing 48 touchdowns to just 5 interceptions in 2020, Aaron Rodgers and the Green Bay Packers agreed to a new contract structure ahead of the 2021 season. Let’s take a look at Rodgers’ contract, the Packers’ salary cap situation, and Green Bay’s options.

The Packers and Rodgers restructured his deal in December of 2019. In this restructure, $14.26 million of his 2020 roster bonus was converted into a signing bonus. This move decreased Rodgers’ cap charge by $11.4 million in 2020.

Ahead of the 2021 season, the Packers and Rodgers agreed to a new contract. The main highlights are that Rodgers’ salary cap number is set to decrease, the contract will void seven days prior to the 2023 league year (one year earlier than it was previously set to), and the Packers can no longer pursue prorated portions of Rodgers’ signing bonus if he decides to retire. Additionally, $14.5 million of his 2021 salary was converted into a signing bonus.

Rodgers has two years remaining on his contract

Entering the 2021 season, Rodgers has two years remaining on his contract. When he signed the four-year extension, there were still two years left on his old deal. Therefore, Rodgers was supposed to be under contract with the Packers until 2024. However, the new structure heading into 2021 means Rodgers’ contract will now void seven days before the 2023 league year.

How does Rodgers’ salary cap number come about in 2021?

Following the restructure, Rodgers’ salary cap number for 2021 will be $27.5 million, per Spotrac. That is down $9.7 million from the previous number of $37.2 million.

That $27.5 million is made of several elements. Rodgers’ base salary for 2021 will be $1.1 million, and he has already received a $6.8 million roster bonus this past offseason. There is another $500,000 in a workout bonus before the rest of the cap number is made up of prorated bonus money. Another $11.5 million is from the original signing bonus he received, and there is a further from $4.8 million from the change in the contract this week. There is also another $2.85 million in a restructure bonus from 2019.

What options do the Packers have with Aaron Rodgers’ contract?

This offseason has been a rollercoaster ride for the Packers and Rodgers. After news broke on Day 1 of the 2021 NFL Draft that the Packers had pulled back from a potential trade, things have spiraled. Green Bay and Rodgers came to a compromise, but there are still several questions for the future.

Can the Packers trade Rodgers next offseason?

There is every chance this drama rears its head once again next offseason. Therefore, the Packers may look to trade Rodgers ahead of the 2022 season. Ultimately, the financial situation may determine whether that is possible.

If Rodgers is on the Packers’ roster next year, he expects to cost $46.1 million against the cap. However, $26.5 million of that is base salary, which would go with Rodgers if he was traded.

The problem is that while the 2023 season is a void year, if the Packers trade Rodgers, any money due to be in that void year of the contract will accelerate onto the cap in 2022. Therefore, trading Rodgers early next offseason would leave the Packers with $26.8 million in dead money.

The option the Packers have is to trade Rodgers after June 1. At that date, the rules around how dead money is calculated changes. Before June 1, all remaining prorated money accelerates onto the current year. On the contrary, any future money due remains in the future in the case of a cut post-June 1.

Could the Packers release Rodgers next offseason?

If the Packers are ready to split from Rodgers — and there is no market for a trade — a release is possible. The calculations if Rodgers were to be released are identical to a trade. If he is released pre-June 1, then his dead money in 2022 would be $26.8 million. However, a post-June 1 trade would leave $19.2 million in 2022 and $7.7 million in 2023.

What happens to his contract if Rodgers retires?

A big part of this contract change in 2021 was giving Rodgers the option to retire. Normally, if a player retires, a team can request he give back a portion of his signing bonus. However, the new contract has a provision that prevents the Packers from pursuing the signing bonus money.

Therefore, if Rodgers were to retire, the only impact on him would be losing the opportunity to earn $26.5 million in salary in 2022. As for the Packers, the same financial situation as above applies. The most likely outcome would be the Packers not officially retiring Rodgers until after June 1. That would split the dead money across 2022 and 2023. With a release or a trade, that would be $19.2 million in 2022 and $7.7 million in 2023.