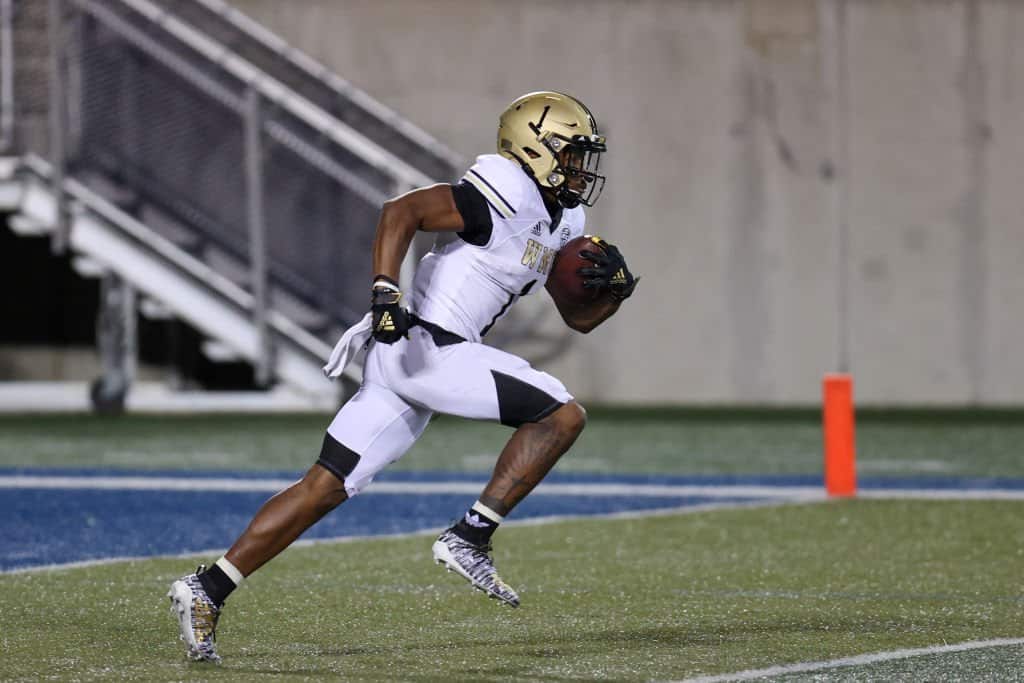 There exists a perpetual need for speed at the NFL. Players who can not only create space but elongate that space, are in short supply. No matter their limitations, they generate an exclusive kind of interest on the draft circuit. Western Michigan wide receiver D’Wayne Eskridge will no doubt benefit from this in the 2021 NFL Draft.

Positives: Three-year starter coming off a terrific senior campaign. Eskridge is quick-footed, uses his hands to separate from defenders, and can turn it on in a single step. Fast and possesses a second gear as well as a legitimate downfield burst.

Nicely adjusts to the errant throw, makes the difficult catch in contorted positions, and looks at the ball go into his hands. Easily makes the reception in stride at full speed. Comes back to the ball out of breaks and displays soft hands. Gives effort blocking when the situation presents itself.

Negatives: Small, struggles in battles, and will struggle to handle press coverage at the next level. Easily brought down at the point by a single defender. Needs space to work.

Analysis: Eskridge is a home-run threat at the receiver position, averaging more than 20 yards per catch the past three years. He’s a big-play wideout who has size limitations, but he should get late-round consideration as a slot receiver/return specialist.

Speed has never been absent from D’Wayne Eskridge’s physical profile. That’s something he boasts on and off the field. In high school. Eskridge was a regional champion in track at Bluffton High School. He won the 100-meter dash, 200-meter dash, and the long jump in his region in both 2015 and 2016.

Naturally, Eskridge’s speed carried over seamlessly to football. Eskridge was primarily a running back for Bluffton High School. On the field, his speed and explosiveness set him apart from the rest. Eskridge ended his career as the all-time touchdowns leader for his school, and his success earned him a three-star designation in the 2016 recruiting class.

Despite reaching three-star status, Eskridge didn’t attract a great deal of interest on the college football market. He received an offer from Ball State but ended up signing with the Western Michigan Broncos of the MAC. There, his speed continued to stand out.

D’Wayne Eskridge never had the volume of a No. 1 wide receiver at Western Michigan, but he still managed to carve out a valuable role for himself. His speed was quickly translatable, and Eskridge logged playing time as a gadget player in his true freshman season.

Interestingly enough, Eskridge switched his primary position to cornerback in his true senior season, and he actually became the team’s best coverage cornerback. In four games serving as a cornerback/receiver hybrid, Eskridge tacked on four pass deflections. However, in the fourth game of that series, Eskridge suffered a broken collarbone while playing as a receiver, ending his season prematurely.

D’Wayne Eskridge’s return from injury in 2020

Luckily, Eskridge got back to full strength and returned for the Broncos as a redshirt senior in 2020. Eskridge switched back to receiver full-time and was used liberally as a dynamic deep threat. In his final season, Eskridge caught 33 passes for 768 yards and a career-high eight touchdowns. His season was highlighted by an outburst against Central Michigan, in which Eskridge put up four catches for 212 yards and three touchdowns.

Overall, Eskridge caught 121 passes for 2,244 yards and 15 touchdowns over the course of his Western Michigan career. He also returned 17 kicks for 467 yards and a touchdown in 2020. Eskridge earned a reputation as one of the NCAA’s most versatile players with his speed. That’s a reputation he may carry over to the NFL.

Speed. That’s what’ll catch your eye when you’re watching D’Wayne Eskridge. The man might have turbines hidden inside his cleats because when he has a runway, he accelerates with extraordinary quickness. Eskridge can create space out of thin air with his ability to rocket out of crowds, and once he’s geared up, he’s hard to catch. Tony Pauline projects him as a 4.35 runnerat the NFL Combine. The Western Michigan wide receiver confirms that on film.

Eskridge’s speed is the most obvious indicator of his athletic profile. However, the Western Michigan wide receiver also has the suddenness and vertical athleticism to supplement his ability to cover ground.

Especially on in-breaking routes, Eskridge changes directions very quickly, and he also uses his eyes to feign intended direction. Additionally, his searing breaks are reliable in their ability to leave space between himself and the defender. From there, Eskridge has the fluidity and explosiveness to take the catch, turn, and go. His burst also gives him some RAC potential.

Additionally, just as Eskridge has the speed and the suddenness, he also has very good vertical athleticism downfield. Eskridge may only be 5-foot-9, but he has enough bounce to go up for balls. He also offers good ball tracking ability, and he’s not a pushover in contested situations. Although his size limits him, Eskridge will adjust for under-thrown balls, and he can withstand contact to haul those catches in on occasion.

What are the potential concerns with D’Wayne Eskridge?

As you might expect, Eskridge’s frame is the main thing holding him back. His speed makes him an enticing weapon, but his size naturally limits him in some aspects of the game. While I am encouraged by Eskridge’s competitive nature in contested situations and against press coverage, his lack of length simply holds him back from consistently winning in those areas. Furthermore, he doesn’t have the consistent contact balance that other fast, dynamic receivers boast earlier on in the draft.

Additionally, Eskridge will be 24 years old by the 2021 NFL Draft. This isn’t a big issue, as Eskridge should be able to file into a speed-based niche fairly quickly. But other receivers may have a larger range of peak years than Eskridge, and his injury history makes this a notable qualm.

D’Wayne Eskridge isn’t a do-it-all receiver, but he’s a truly dynamic threat with his speed, and he’s an underrated route runner with the necessary suddenness and twitch to gain separation with ease. He also has a surprisingly nasty attitude as a run blocker, which serves as an amusing bonus.

Despite his size, Eskridge does not play small. He should be able to stand out in one-on-one drills at the Senior Bowl. Combine that with an opportunity to flash his upside at the NFL Combine, and Eskridge could be a riser down the stretch.

Teams that could use D’Wayne Eskridge’s skill set

Eskridge has some value as a returner, which will likely increase stock. That said, I see him as a solid Day 3 option for teams who particularly lack the speed element at wide receiver.

Teams like the Washington Football Team, Saints, Dolphins, Lions, Browns, and Patriots stand out as potential fits. But in truth, Eskridge offers enough utility to be a fairly universal match from Round 4 to Round 5. Round 3 is a possibility if Eskridge has a stellar offseason, but his age, as well as the depth of the WR class, works against him.

There’s also the random chance a team could try Eskridge out at slot cornerback, given that he produced in limited coverage reps. That’s kind of fun to think about, but his future more likely rests at receiver. That said, teams may appreciate how willing he was to play a different position, and Eskridge’s experience at cornerback also gave him valuable insight into the mindset of coverage players.

Whatever the case, using Eskridge’s speed is the most crucial duty for whichever team picks him up. As a wide receiver for Western Michigan, Eskridge was a tantalizing big-play threat and an extremely competitive player. His speed and moxie are two things that incredibly translate well to the NFL, and in the right role, Eskridge can make some noise and maybe even develop into a complete receiver.