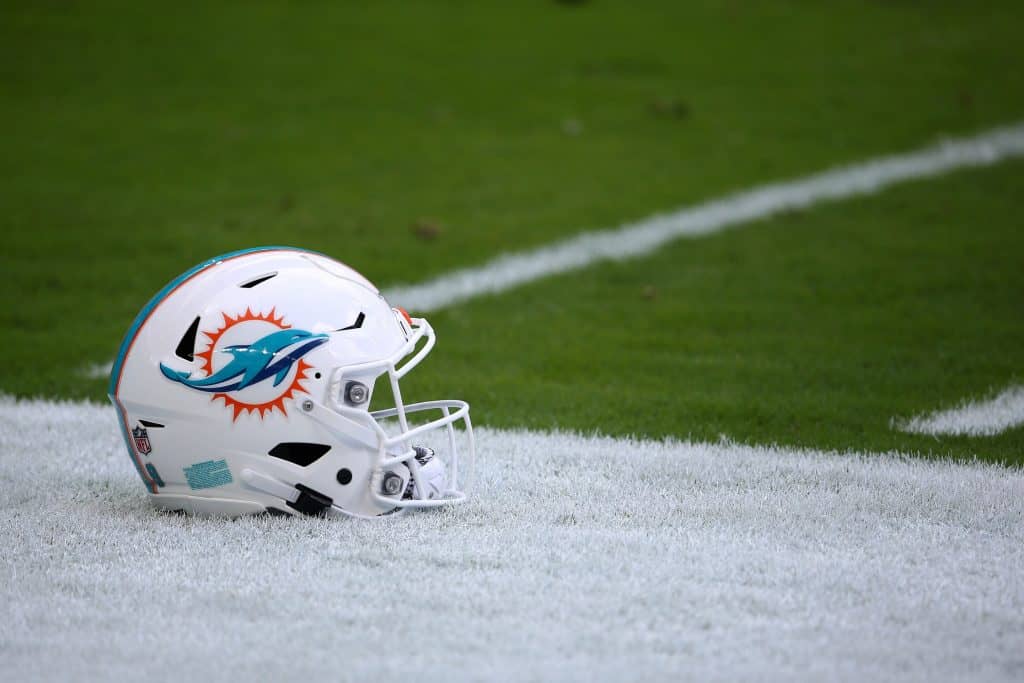 The demands of the NFL Draft — or rather, the Houston Texans — have been kind to the Miami Dolphins in recent years. Miami had three first-round picks in the 2020 NFL Draft. They have two first-round picks this year, and they had two first-rounders in 2022 before they traded back up to No. 6. They also have a trove of Day 2 picks over the next two years as well. With a building roster and a franchise quarterback in place, the Dolphins need to capitalize on their excess capital and take themselves over the top. And with this Dolphins 7-Round 2021 NFL Mock Draft, they’ll put themselves in a good spot.

Now that the Dolphins have signed veteran tackle D.J. Fluker, we can feasibly lower the odds of Penei Sewell being their pick at No. 6. Fluker gives Miami some flexibility with young tackles Austin Jackson and Robert Hunt. While they could still stand to add more offensive line help later, at No. 6, it seems like the conversation now revolves around picking the best offensive playmaker.

Kyle Pitts is my best overall player of the ones being considered, and Ja’Marr Chase and DeVonta Smith also deserve consideration. However, I’ve maintained for months that the best mix of talent and need for Miami is Alabama wide receiver Jaylen Waddle.

It’s really simple. The Dolphins need separation and run-after-catch ability at wide receiver more than they need another alpha with a specialization in contested situations.

That’s not to say that Chase is just a contested-catch receiver, but his skill set is more redundant with DeVante Parker and Preston Williams. Waddle, meanwhile, complements them, opens the field up for them, and at the same time, provides Tua with a safety blanket and a dynamic deep threat all in one.

This is an interesting discussion to have. Najee Harris was gone, so Micah Parsons was easily the top talent on the board in this Dolphins 7-Round 2021 NFL Mock Draft. He has the elite athleticism, density, and play pace to translate very well in Miami’s defense as an edge-linebacker hybrid, potentially filling the Kyle Van Noy role that Brian Flores seems to value.

Talent aside, however, there will be questions surrounding Parsons’ maturity. Reports of hazing and inflammatory interactions with other players at Penn State have muddied his stock. Dolphins fans may be especially apprehensive toward banking on a player with character concerns after the Isaiah Wilson experiment ended so swiftly. Additionally, for Flores, who values character highly, Parsons might not pass the test.

Nevertheless, character evaluations, at least here on the outside, are often somewhat speculative. And the fact of the matter is that when most of the evaluation subjects are between 21-24 years old, there will sometimes be room for maturation. The Dolphins have enough early capital where they can take the risk on a tenacious 6-foot-3, 246-pound linebacker that runs a 4.36.

After fielding two starting running backs who each weighed under 200 pounds last season, Miami needs a workhorse back to help shoulder some of the load for Tua. I thought about waiting to pick a running back later on. However, the depth of this class isn’t great. Travis Etienne was already gone. And at No. 36, Javonte Williams stood out as the last excellent fit left on the board in this Dolphins 7-Round 2021 NFL Mock Draft.

Williams would give Miami the bruising back they lack, but he also brings much more to the table. At around 5-foot-10, 212 pounds, Williams has the density and low center of gravity to bounce off tackles. Additionally, with a 36-inch vertical and a 123-inch broad jump, he’s exceptionally explosive. He also has good elusiveness for his size. Williams only has 4.57 speed, but when you can navigate congestion like he can, you don’t need to hit the open field on every play.

Furthermore, Williams also provides some utility as a receiver out of the backfield, as if his traits as a pure runner weren’t already enticing. Overall, Williams gives Miami the complete back they seek. In a scheme that should utilize a lot of downhill power alignments, Williams projects extremely well.

This pick coming right after Williams feels a little unfair. A few months ago, this would have been too high for Quinn Meinerz. However, as the draft process has unfolded, so too has the truth regarding the Wisconsin-Whitewater product. Meinerz shocked onlookers at the Senior Bowl with a dominant performance against Power Five competition. Additionally, at his pro day, he put up a similarly impressive showing.

Meinerz earned a Relative Athletic Score of 9.98, using a 4.99 40-yard dash, a 32-inch vertical, a 111-inch broad jump, and 33 bench reps to reach that mark, all at 6-foot-3 and 320 pounds. Meinerz is strong, physical, and low to the ground. He has the traits and the stubborn, unwavering toughness to anchor the Dolphins’ line early, if not immediately, on Day 1.

Even here in mid-April, this may seem a bit high for Meinerz. On the other hand, the Wisconsin-Whitewater product has been steadily trending upward this offseason. Now, there’s a strong chance he’s a top-50 pick. With Miami picking at 50, it seems like a healthy floor has been established.

Even after picking Parsons, the Dolphins could still use some more pass-rush help on the edge across from Emmanuel Ogbah. In mid-Round 3, the options are starting to dwindle. But one intriguing fit who remains on the board is UAB edge rusher Jordan Smith.

Smith is a massive physical specimen. He’s 6-foot-6, 264 pounds, with 33.5-inch arms and a wingspan of almost seven feet. He’s also a good athlete on top of his measurable traits. He didn’t test quite as well as expected but still earned a 33-inch vertical and a 117-inch broad jump — both solid numbers for a player his size.

What truly stands out with Smith, however, is his fluidity and length. He has good flexibility for his size. Additionally, his length allows him to establish separation against offensive linemen as a pass rusher. Smith flashed a lot at the Senior Bowl, and his versatility projects well into the Dolphins’ scheme, provided they can unearth the entirety of his athletic upside.

For purposes of consistency across mock drafts, I’m not making trades here. Consequently, this would be a good spot for the Dolphins to trade back and acquire a few more Day 3 picks. In Round 5, the value across the board takes a noticeable step down. Having said that, one player worth a fourth-round pick on my board was still available. That player is UAB wide receiver Austin Watkins.

Watkins admittedly didn’t test well. He logged a 4.56 40-yard dash, a 31.5-inch vertical, and a 116-inch broad jump. However, he measured in well, with a near 6-foot-2, 209-pound frame and an impressive 18 bench reps. Those numbers match up with what Watkins shows on tape. He’s not an elite athlete. Nevertheless, he still has decent speed and explosiveness. Additionally, in contested situations, his play strength and competitive toughness often give him an edge.

Now that the Dolphins have their dynamic game-breaker in Waddle, they can double-up with another boundary receiver. At any rate, while contested catches are one of Watkins’ specialties, he’s a complete receiver beyond that. He’s more fluid and slippery than his numbers indicate. He’s also an exceptional route runner. Sammy Watkins’ cousin could be a steal in a Dolphins receiving corps that’s still settling out.

Backup offensive tackle isn’t often thought about as something that can help the Dolphins contend with the Buffalo Bills. Still, if you look at Buffalo’s roster, one thing they have, beyond their accumulation of talent at skill positions and their quarterback security, is tremendous depth on the line. The Bills are well-equipped up front if injuries do occur. For the most important position group, Miami should employ that same kind of preparation.

The Dolphins did sign Fluker recently, and as mentioned earlier, Jackson and Hunt are still developing. While this may be true, adding an experienced lineman with tackle/guard versatility seems like a smart move for Miami late. Here at the beginning of Round 7, in this Dolphins 2021 NFL Mock Draft, Iowa’s Alaric Jackson makes a lot of sense.

Hailing from Iowa, a known offensive line factory, Jackson was a four-year starter for the Hawkeyes. He played left tackle, but with his large 6-foot-5.5, 321-pound frame, he projects well inside to guard. With a move inside, some of his lateral limitations and issues with flexibility can be mitigated. Ultimately, Jackson gives Miami more depth, something they can’t have enough of right now.

The Dolphins signed slot cornerback Justin Coleman to go along with Byron Jones, Xavien Howard, and 2020 first-round pick Noah Igbinoghene. Thus, cornerback isn’t at the top of their list of needs. Still, with Igbinoghene still a bit behind in his development, Miami would be wise to add some upside at cornerback in the 2021 NFL Draft. In this 7-Round 2021 NFL Mock Draft, the Dolphins get an underrated developmental option.

Jason Pinnock doesn’t have a lot of buzz. Nevertheless, the Pittsburgh cornerback has the fourth-highest Relative Athletic Score at his position in an uber-athletic cornerback class. Pinnock registered a RAS of 9.77 at his pro day, with a 4.49 40-yard dash, a 39.5-inch vertical, a 128-inch broad jump, and 15 bench reps at almost 6-foot-1, 204 pounds.

With his explosiveness and size, Pinnock projects well into a Dolphins coverage scheme that used more zone alignments than expected last year. He’s super springy on tape, and with 6 interceptions and 19 deflections over the course of his four-year career, he no doubt has the ball skills to build upon.