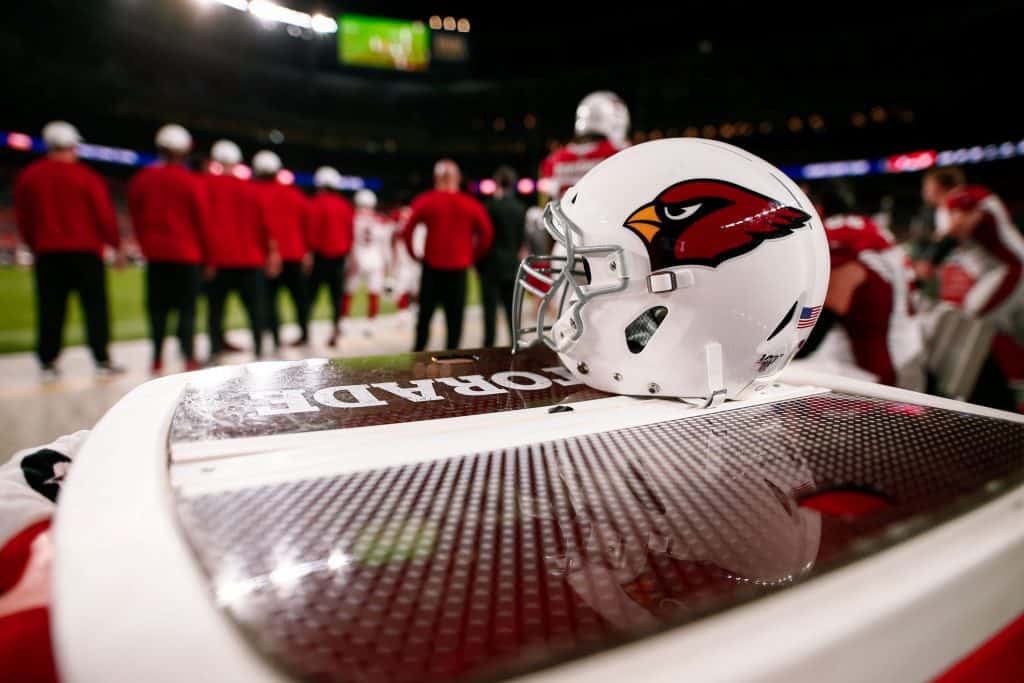 The Arizona Cardinals haven’t lived up to the expectations that a Kliff Kingsbury-Kyler Murray pairing garners. The clock is ticking on a playoff appearance, made difficult by a grueling NFC West. They’ll have to add talent through the NFL Draft, even though a lack of darts to throw is an issue. This Cardinals 7-Round 2021 NFL Mock Draft looks to remedy a promising, but mediocre roster.

Typically, forcing a rookie corner to take on significant responsibilities is something to be wary of. Especially when the volatile performances the Arizona secondary is likely to see could be tough to weather. Nevertheless, Greg Newsome is versatile and polished enough to be a strong starter from the jump. This Cardinals 7-Round 2021 NFL Mock Draft starts with an encouraging defensive playmaker.

Here, Alabama’s Patrick Surtain II and South Carolina’s Jaycee Horn were already off the board. There are many separate paths the Cardinals can take. Virginia Tech’s Caleb Farley would also be an option. What separates the two is that Newsome offers a similar level of talent without long-term medical concerns.

Addressing holes in the trenches and adding to Murray’s arsenal are legitimate needs, but Newsome’s stock has risen considerably. The value of a pro-ready defensive back can’t be overstated for this team.

Newsome’s skillset showcases an affinity for off-man and zone coverage. Additionally, there are few doubts about his ability to play at the line of scrimmage. As his 9.66 Relative Athletic Score (RAS) would suggest, Newsome has no issue carrying receivers vertically.

Arizona shouldn’t hesitate to add him to a secondary that already touts Byron Murphy and Budda Baker. His combination of a high floor and ceiling made him the pick over Azeez Ojulari, Kwity Paye, and Travis Etienne.

If this holds true, the Cardinals would be drafting their second Day 2 offensive tackle in as many years. Given the lack of talent upfront and the growing possibility that sophomore Josh Jones slides to guard, Liam Eichenberg emerges as a strong candidate to start at either tackle spot. Unfortunately, Eichenberg is likely the last rookie starter of this Cardinals 7-Round 2021 NFL Mock Draft.

Arizona has worked to improve their offensive line recently, adding Rodney Hudson and Brian Winters. Throwing Eichenberg into the mix gives them a surplus of starting-caliber linemen. Still, Hudson is the only one playing at an above-average level. That added depth could prove to be crucial in protecting Murray this season.

Eichenberg’s strengths lie in his ability in the run game and his fundamentals in pass protection. He certainly has limitations as an athlete that hurt his upside. Still, there is a good chance he becomes a long-term starter for whoever drafts him. Value and positional need intersect here as he is taken over Daviyon Nixon, Rondale Moore, and Michael Carter.

Charles Snowden flashed the past couple of years for Virginia due to his freakish size and athleticism. Largely playing in the middle of the field, the 6’6” linebacker was able to make plays in coverage and against the run. He also displayed ability as a pass rusher. His length makes that last point all the more enticing, as Snowden projects as a 3-4 outside linebacker.

This Cardinals 7-Round 2021 NFL Mock Draft selection is not without risk. It is an experimental way to add to the pass rush, but there is not a better landing spot for a young edge rusher. To be mentored by two future Hall of Famers in Chandler Jones and J.J. Watt could help Snowden’s development tremendously. The physical upside is there, but underdeveloped hands and pass-rush plan lower his floor.

He may not start right away, but I like his odds as a future replacement for Jones at the very least. Given the Cardinals’ affinity for hybrid players (Baker, Isaiah Simmons, and the now-departed Haason Reddick), there is a path for him. He fits Vance Joseph’s scheme and has the versatility to take on a myriad of assignments.

Now on Day 3, there is far less upside available than previous rounds. Snowden’s ceiling is more lucrative than other potential options here, such as Josh Palmer, Chuba Hubbard, and Divine Deablo. Of course, you’d like to add as many immediate contributors as possible. Given the lack of draft picks, Arizona may have to roll the dice if they don’t make any trades.

Looking at the Cardinals’ wide receiver room shows why many are calling for a target in the first round. We know DeAndre Hopkins is elite, but unfortunately, Christian Kirk and Andy Isabella have both fallen short of expectations their draft slots set for them. Of course, we can’t forget about A.J. Green, who managed to steal $6 million from Arizona.

It’s a need, as improving Murray’s third-down performance is a must going into Year 3. However, the way the board fell here, wide receiver simply was never the best option. Tamorrion Terry is not going to step in and right the ship. What he does offer is depth on the boundary, which is also something they desperately need.

The likelihood of Green staying healthy for a full season is not particularly high. With the rest of Arizona’s receiving room, the boundary opposite of Hopkins could be a void plaguing the offense. Terry offers size and speed, standing a hair under 6’3” and sporting a 4.45 40-yard dash time. This culminated into a 7.3 RAS. Clearly, athletic upside is something the Cardinals covet in this 7-Round 2021 NFL Mock Draft.

He’s certainly rough around the edges, as his hands and route tree are both suspect. Destined to be a Day 3 selection, Arizona isn’t getting a high-level partner in crime for Hopkins. Still, they give themselves ample depth on the outside and an additional downfield threat to amplify Murray’s tremendous deep ball.

Depth at linebacker has eluded Arizona for some time now, but they address it here. Nick Niemann is an incredible athlete (9.51 RAS) that touts great speed, agility, and acceleration numbers. He also does not sacrifice the height of a prototypical linebacker.

This translates to upside in the passing game. Niemann could be deployed to suppress mismatches out of the backfield or at tight end. Similarly, his athleticism can be further utilized on special teams.

Naturally, there’s a reason Niemann has received virtually no hype and won’t be taken until Day 3, if at all. At only 234 pounds, Niemann is small for the position. He struggles to take on blocks and make an impact against the run. Ultimately, he may never be an every-down linebacker, but the depth he offers on passing downs warrants a selection.

The final pick of this Cardinals 7-Round 2021 NFL Mock Draft aims to add depth to the defensive line. Tedarrell Slaton, like most of the previous selections in this mock draft, posted promising testing numbers (7.96 RAS). At 6’4” and 330 pounds, Slaton moves well for his size. His burst is phenomenal and his frame helps his game, too.

Slaton is at his best patrolling the A-gaps. Thus, it is unlikely he strays from the nose tackle spot in Joseph’s defense. He’s surprisingly inconsistent against the run but pushes the pocket well for a zero-tech. At his best, he is using a strong bull-rush and holding his own against double teams.

Issues with balance, consistency, and effort may have tanked his draft stock. However, at pick 247, he offers solid value as a depth piece. Arizona’s defensive line gets thin quickly, especially when one considers Watt’s durability concerns. Slaton won’t directly step in for him, but he allows Rashard Lawrence or Leki Fotu to slide over without suffering too harsh of a penalty.