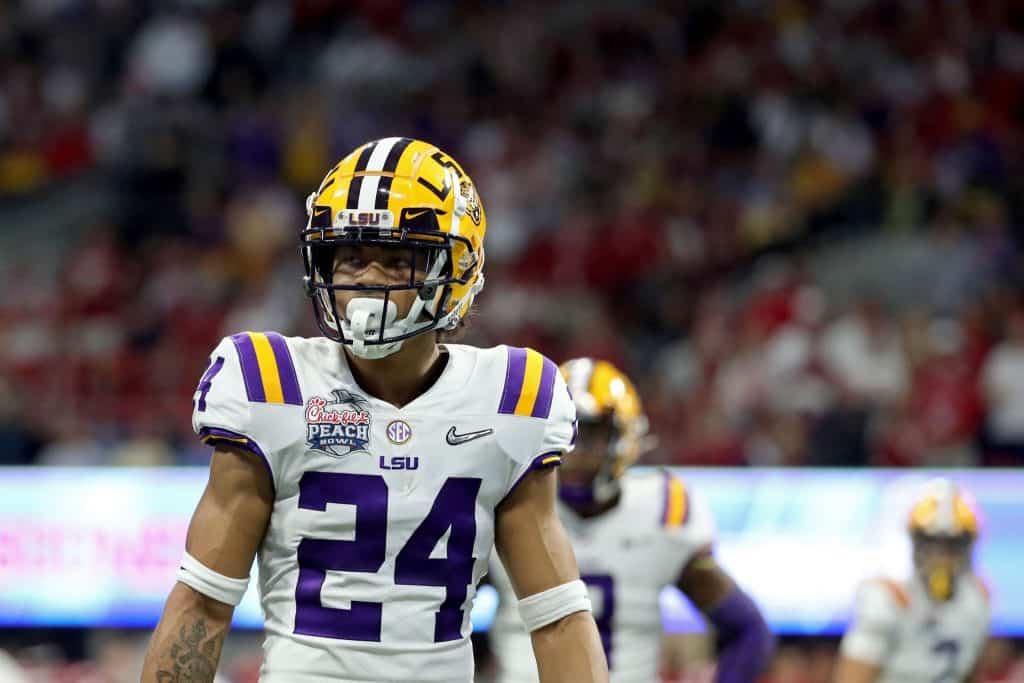 The 2021 NFL Draft is still reasonably close in the rearview mirror. As it maintains this proximity, it serves as a potent reminder that less than one year from now, we’ll be having the same conversations about an entirely different group of NFL Draft prospects. We won’t waste any time introducing you to this new crop of talented players. Compiled by myself and fellow PFN draft analyst Oliver Hodgkinson, this is our initial 2022 NFL Draft Top 50 Big Board.

Defense fills four of the top five spots in the 2022 NFL Draft.

There are a select few players considered for the top overall spot each year. This year, Oregon’s Kayvon Thibodeaux is one of those players. The 6-foot-5, 250-pound edge rusher moves with otherworldly explosiveness, flexibility, and pace. His length allows him to fabricate power in close contact. He’s a hyper-athletic pass rusher in the mold of several first overall picks before him.

When people talk about someone as a potential top-five pick years before his draft cycle, you know he’s special. Such is the case with Notre Dame’s Kyle Hamilton. A playmaker in all phases, the 6-foot-4, 219-pound safety has tremendous versatility, athletic freedom, and urgency to his game. His impact in the box and in coverage solidifies his ranking on our 2022 NFL Draft Big Board.

It’s important to remember that all athletes are human beings. This becomes particularly difficult to remember upon watching Evan Neal move. The 6-foot-7, 360-pound tackle defies gravitational mass and physics laws with his ability to match rushers, move upfield, and maul opposing defenders. In a weaker 2022 tackle class, Neal has the physical tools to pace his position.

After a freshman season that saw him amass 6 interceptions and 15 pass deflections, it’s hard to imagine Derek Stingley Jr. anywhere other than the CB1 spot. Between Stingley and players like Kaiir Elam, the race is closer than many think. Nevertheless, Stingley is easily a top prospect with his explosive athleticism, insane ball tracking ability, and proactivity in contested situations.

A versatile linebacker-defensive lineman hybrid, USC’s Drake Jackson has been one of the top defensive playmakers in the Pac-12 for two years. He has the robust and formidable frame of a pure edge rusher, but he moves with uncanny spryness and offers supreme flexibility when rushing from different angles. Like Thibodeaux, Jackson could be a top-five pick in waiting.

Remember this name. A former five-star prospect, DeMarvin Leal, is brimming with upside. He stands at 6-foot-4, 290 pounds, but he’s incredibly explosive, both laterally and vertically. With his lateral twitch and finesse, Leal can combine abrupt motions with brutal hand techniques, and his grip strength allows him to wrench open lanes on the line. At this point, his talent is top-10 worthy.

For now, there’s no piercing the consensus opinion that Stingley Jr. is CB1 in the 2022 NFL Draft. However, Florida’s Kaiir Elam needs much more credence in the conversation. Elam is an excellent athlete at 6-foot-2, 196 pounds. He’s extremely smooth in man coverage, with fluid hips and eye-catching short-range burst. And like Stingley, he can convert at the catch point.

Some viewed Rasheed Walker as a potential early-round pick in last year’s class. Yet, he ultimately chose to return to Penn State for his redshirt junior season. The move could deliver significant dividends for Walker. The athletic 6-foot-6, 312-pound tackle could have been a Day 2 pick in 2020, but he has a chance to leap into Round 1 with a solid conclusion to his collegiate career.

After serving as one of Justin Fields‘ top targets in 2020, it’s no surprise that Chris Olave comes back as the highest-rated receiver on our consensus 2022 NFL Draft Big Board. Olave is a well-rounded receiver with few holes in his game, making him one of the best receivers in the 2022 class. He’s well-sized at 6-foot-1, 188 pounds, and he offers the smooth athleticism, route-running ability, and body control to be a threat down the field.

Our first quarterback barely eclipses the top ten on our 2022 NFL Draft Big Board. That’s another representation of how unsettled the 2022 QB class is. Still, if you had to bank on one QB making it big, Spencer Rattler might be the best bet. He’s a former top prospect with the athleticism and top-end arm talent to create on his own. That is certainly an invaluable trait for QBs in the modern game.

Olave is ranked just a hair higher on our initial 2022 NFL Draft Big Board, but he and Treylon Burks might as well be tied. Burks is just as enticing as a prospect, and his physical tools grant him plenty of upside. He’s 6-foot-3, 225 pounds, but he isn’t just a contested-catch savant. Burks couples his imposing frame with dynamic athleticism, run-after-catch ability, and awareness in high-pressure situations.

Injuries prevented George Karlaftis from adequately following up his insane 2019 campaign — in which he amassed 17 tackles for loss, 7.5 sacks, and 2 pass deflections. Nevertheless, Karlaftis has the kind of potential that scouts will gravitate to. He has a bulky frame at 6-foot-4, 270 pounds, and he moves extremely well for his size. With his mix of burst and power, he could soon be a terror on the line once again.

The consensus TE1 in the 2022 NFL Draft, Jalen Wydermyer, is just plain fun to watch. He has a traditional tight end size at 6-foot-5, 265 pounds, but he moves with ease. He can run routes, make the tough catches, and extend plays after securing the pass. Any tight end with Wydermyer’s mix of athletic potential and high-end receiving ability is going to be rated highly.

Garrett Wilson was one of Ohio State’s most dynamic receiving weapons in 2020, but 2021 could be a chance for him to reach even higher heights. Wilson doesn’t have a dominating frame, but his impeccable body control and focus at the catch point earn him plenty of real estate on highlight reels. On top of that, he has the twitch and burst to gain separation as a route runner.

Ever since he put up 3,641 yards, 38 touchdowns, and just 7 interceptions as a true freshman, Sam Howell has been compared to Baker Mayfield. It’s lazy deference at this point, but the comparison does nonetheless have some merit. Like Mayfield, Howell is stout, strong, and a steely competitor. He isn’t quite as accurate as Mayfield was, and he’s somewhat volatile, but he has the arm talent to ascend.

While the 2020 linebacker class was top-heavy, there’s much more projection involved with 2021’s class, at least at this point. One player who projects well over next season is Alabama’s Christian Harris. Standing at 6-foot-2, 232 pounds, Harris owns imposing size, and he’s very twitchy and energetic. He took a step up in 2020, and 2021 could be the year that he solidifies his first-round status.

The 2020 cornerback class spoiled us with how many lengthy athletes were available. Nevertheless, the 2021 class might be just as enticing. Ahmad Gardner owns many of the desired high-end traits. He’s 6-foot-2, 188 pounds, but he offers exceptional hip fluidity and upfield burst. Moreover, he’s naturally instinctive and quick to react. Some of his traits share a similarity with 2020 first-rounder Greg Newsome II.

It’s not often that interior linemen are ranked this highly, but Kenyon Green has the skill set to demand this ranking. A returning starter for the Texas A&M Aggies, Green is built to play on the interior. He’s stout and powerful, and his 6-foot-4, 325-pound frame gives him plenty of natural leverage. Likewise, he is an exciting athlete, with the lateral burst and recovery athleticism to make some jaw-dropping plays in the trenches.

If everything goes right for Andrew Booth Jr. in 2021, he can be a top-five pick. That’s not an overstatement. Booth needs to be more consistent, but his pallet of traits is awe-inspiring. The former WR has a long frame. He’s incredibly explosive and twitchy. His best trait, however, is his outrageous coordination and playmaking ability. With Derion Kendrick gone from Death Valley, it’s Booth’s time to shine.

Rattler and Howell are most often dubbed QB1 and QB2, but they shouldn’t be the only ones given that kind of respect. Desmond Ridder is an equally enthralling QB prospect. The 6-foot-4, 215-pound signal-caller is an elite athlete, having piled up 592 yards and 12 scores on the ground last year. Beyond that, he’s a high character leader. He boasts an arm that can generate velocity with effortless ease.

Some of the linebackers with high-end traits may naturally rise early in the process in a weaker class. Such is the case for Florida’s Ventrell Miller. He still needs to become a more consistent player in multiple phases. Nevertheless, he has a solid 6-foot-1, 230-pound frame, and he’s a superb athlete for his size. Miller has already proven his ability to make plays in the box, and he has definite three-down potential.

Few running backs were more productive than Breece Hall in 2020. The true sophomore accumulated 1,572 yards and 21 touchdowns on 279 carries, good for 5.6 yards per carry. He’s registered 46 catches for 432 yards and 3 scores over the past two seasons. With his density, elusiveness, contact balance, and stubborn persistence to stay on his feet, Hall is our RB1. But he doesn’t have the spot locked up.

It’s a two-person race for RB1 between Breece Hall and Isaiah Spiller. On our 2022 NFL Draft Big Board, Hall gets the slight edge for now, but they’re basically tied. Spiller is a compelling player in his own right, rumbling for 1,036 yards and 9 touchdowns at 5.5 yards per carry in 2020. This battle may come down to who the better receiver is, and Spiller has the size and athleticism to make progress there.

No, it’s not just baseless hype. There’s still more Malik Willis has to prove, but he can undoubtedly leave the draft as QB1 next year. Willis lit the league on fire in 2020 and played against more capable defenses like Syracuse, Virginia Tech, Coastal Carolina, and NC State. With elite dynamic ability as a runner and a fuel-efficient rocket for an arm, Willis — a humble leader — can prove he’s legit in 2021.

Coming off a year in which he earned 7 sacks, 10.5 tackles for loss, and 5 deflections for a bowl-bound Cincinnati team, it’s surprising that Myjai Sanders doesn’t have more hype. He’s an excellent athletic prospect, with a rangy 6-foot-5, 258-pound frame and enthralling flashes of explosiveness, bend, and quickness. He’s trending up with his hand usage, and he enters 2021 as one of the highest-rated seniors on defense.