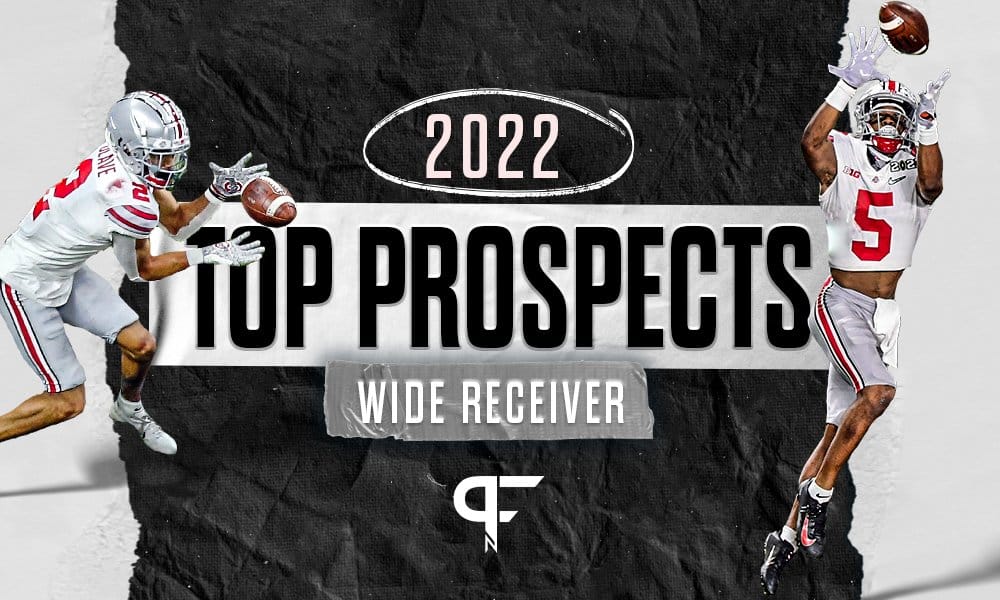 As the CFB season approaches, it's time to take one last look at the preseason board. Who are the top wide receivers in the 2022 NFL Draft?

The past two wide receiver classes have been incredibly deep. That doesn’t seem to change in 2022. I and fellow NFL Draft Analyst Oliver Hodgkinson had to trim down our list of the top 10 wide receivers in the 2022 NFL Draft. There were some tough omissions. Even beyond this list, there are players who deserve recognition. But these players are the cream of the crop.

For all practical intents and purposes, Garrett Wilson and Chris Olave produced around the same amount last year. Wilson had 43 catches for 723 yards and 6 touchdowns, while Olave had 50 catches for 729 yards and 7 touchdowns. So why is Wilson higher on this list? Any comparison between these two is splitting hairs, but for Wilson, the three-level ability is key.

Wilson isn’t quite as refined of a route runner as Olave at this point, but one could argue Wilson has the potential to be devastating in that area. He has incredible lateral suddenness and burst, as well as impressive hip sink and change-of-direction ability. His explosiveness and twitch translate to strong RAC ability. Down the field, Wilson has elite vertical athleticism, body control, and focus. He has the star potential that Olave doesn’t.

It’s extremely close between the top three wide receivers, and especially between Wilson and Chris Olave. Both were productive catching passes from Justin Fields last season, and both have skill sets that translate incredibly well to the NFL. Wilson has the physical potential to be a better separator than Olave, and he has greater contested-catch ability. But right now, if the draft happened tomorrow morning, Olave might have the higher NFL floor.

Prospect evaluation takes both floor and ceiling into account, which is why Wilson is higher here. Nevertheless, Olave will be an incredibly safe pick wherever he goes in the 2022 NFL Draft. While not quite as twitchy as Wilson, Olave is still very explosive in the open field, and he might have better long speed. He stretches the defense with his vertical ability, and his smooth route running and soft hands enable him to make plays all across the field.

Ohio State monopolized the top of this list, but if anyone can end their reign by the end of the season, it’s Arkansas wide receiver Treylon Burks. Burks may not benefit from the same quarterback play as Wilson and Olave, but even without top-end play under center, he makes plays. In fact, the most inaccurate passes sometimes make Burks look the best.

Burks has the elite playmaking ability that you’d expect from a 6’3″, 225-pound wide receiver. He has uncanny body control and hand strength in contested situations, but beyond that, he’s a terrific athlete for his size. Burks can change directions quickly, and his run-after-catch ability is superb. He doesn’t have the route tree that Olave and Wilson have, but as a pure playmaker, Burks has WR1 potential.

This Drake may not spit bars or release platinum albums, but Drake London can be a star in his own right. At one point, he was the “next man up” for USC, behind Amon-Ra St. Brown and Tyler Vaughns. But now, those two are gone, and London is the top dog in Graham Harrell’s offense. Thus, he could be poised for his best season yet.

If you thought Burks was big, London is bigger. He stands at a towering 6’5″, 210 pounds. But for that size, his strengths may surprise you. Sure, he’s a great contested-catch receiver with outstanding toughness, reach, and timing in tight spaces. But on top of that, London has excellent run-after-catch ability as well, and he’s supremely elusive for his size. He doesn’t have the speed or burst of Burks, but he can be just as dangerous in space.

This may surprise you. While a recognizable name, Nevada’s Romeo Doubs doesn’t quite have the hype of other top wide receivers in the 2022 NFL Draft like John Metchie III, Justyn Ross, or David Bell. Nevertheless, one could argue that Doubs has potentially the highest upside of the bunch. Masked beneath his production is a legitimate NFL Draft prospect with astronomical potential.

Doubs isn’t a complete player just yet. He does need to be more consistent as a catcher in 2021, and he can still further refine his route running. Having said this, Doubs is a special athlete. He’s one of the twitchiest players in this class — bar none — with great downfield explosiveness, stacking ability, and body control. With his twitch and fast feet, he has the potential to be an elite route runner and an elite run-after-catch threat.

Which wide receivers round out our top 10 rankings for the 2022 NFL Draft?

Mobile, Alabama. Home of the Reese’s Senior Bowl and one of the top wide receivers in the 2022 NFL Draft. Coming from South Alabama, Jalen Tolbert doesn’t always get as much hype as other receivers. Nevertheless, Tolbert is one of the top returning producers from 2020, and there’s a reason for that. The Jaguars’ star has great playmaking ability downfield, and that’s ultimately the staple of his game.

Tolbert has the speed to gain separation downfield, and in contested situations, his combination of size, leverage awareness, and ball-tracking ability gives him plenty of utility. Tolbert’s releases are also efficient, and he has the methodical route-running prowess to keep finding separation at the NFL level. Tolbert could be more consistent with his hands at times, but he’s proven to be a steady catalyst for an offense.

As a true freshman in 2018, Justyn Ross lit the ACC on fire with 48 catches for 1,000 yards and 9 touchdowns. He immediately had his name penciled in for way-too-early 2021 NFL Draft mocks across the virtual landscape.

A rare spinal injury put Ross’ career plans on hold — and for a while, some were worried he’d never play again. Now, thankfully, Ross is back, and he’s ready to remind onlookers how talented he is.

College football is better when Ross is playing. It’s that simple. But he’ll have to prove he’s still comfortable after spending so much time away due to injury. Nevertheless — Ross is medically cleared — and if he remains at 100%, he has tantalizing upside.

At 6’4″, 205 pounds, Ross is an extremely smooth player with excellent size. With top-notch fluidity, hip sink, and body control in midair, Ross has alpha potential on the boundary.

It takes a lot to earn a semblance of recognition while playing at the same school as Rondale Moore. Granted, Moore dealt with injuries throughout the 2019 and 2020 seasons. But when Moore missed time, David Bell was always right there to pick up his production and keep the offense rolling. Entering 2021, Bell is the premier weapon in Jeff Brohm’s offense, and he’s primed to dominate the Big Ten in Year 3.

Bell’s highlight-reel catches in contested situations get the most attention, but the Purdue WR is also strong in other phases. He’s an explosive athlete with a strong 6’2″, 205-pound frame, with some toughness as a ball carrier after the catch. He’ll have to keep refining his route running and show off more success against press coverage, but his upside is enticing.

No other archetypal player faces more pressure during any given season than an Alabama wide receiver. Alabama wide receivers are essentially expected to go in the NFL Draft and go early. This past spring, two went in the top 10 in Jaylen Waddle and DeVonta Smith. John Metchie III might not go quite that high, but with so many voided targets in that Alabama offense, he’s bound to put up massive numbers.

Metchie isn’t the biggest receiver, but he has great speed and explosiveness in the open field. He’s also a savvy route runner with solid zone awareness. He has a knack for not only finding open space downfield but extending that open space. Metchie doesn’t quite have the elite creation ability of Waddle or the polish, toughness, and relentless consistency of Smith. Still, he can win over evaluators with his dynamic skill set.

When in doubt, invest confidence in players who can create for themselves. That’s exactly the kind of player Zay Flowers is. The Boston College offense is trending up under Jeff Hafley’s oversight, and Flowers is a big reason why. Although he’s undersized at around 5’10”, 177 pounds, Flowers has the kind of creation ability that’s coveted at the NFL level today.

In the words of my colleague and closet Boston College fan Oliver Hodgkinson, Flowers has “ankle-breaking athleticism” and “ludicrous change-of-direction ability.” Having watched Flowers, I can confirm Oli’s claims.

Flowers is extremely explosive and dynamic, and his hips are frighteningly loose in open space. He doesn’t quite have the proactive catching ability of Waddle, but Flowers’ big-play propensity is of a similar ilk. That could ultimately drive him further up this list.