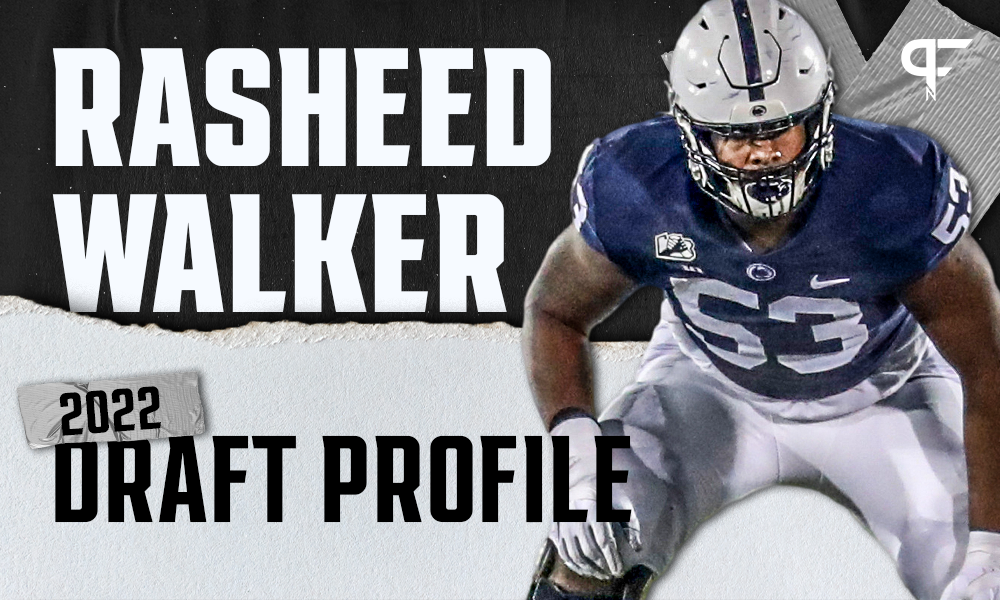 The game of football is constantly evolving. When the very fundaments of the sport aren’t eroding against time, clashing philosophies and innovations make each year a must-watch spectacle. Even amidst all this change, however, there is something we can always count on staying the same. Offensive line play matters, and having good offensive line play can be an irreplaceable competitive advantage. Thus, good offensive linemen are always in demand, and Penn State OT Rasheed Walker absolutely qualifies. What does Walker’s NFL Draft scouting report entail, and can he be a franchise left tackle in the NFL?

Walker was already a known quantity before the 2020 season. In 2019, he started all 13 games for the Nittany Lions as a redshirt freshman. Then, in 2020, he reprised his role, locking down Sean Clifford’s blindside.

Now, Walker returns to college football as one of the best tackles in the nation. And in a relatively unsettled class, he can use his established notoriety to gain separation at the top. Walker’s NFL Draft scouting report is solid, and it features all of the necessary qualities of an NFL protector.

It always starts with the athletic foundation for NFL players. You will find outliers — less athletic players who manage to carve out roles. However, more often than not, the better athletes simply perform at a better level across the board. Having plus physical traits puts one at a competitive advantage. Penn State OT Walker checks this box.

He possesses excellent size, standing at around 6’6″ and 320 pounds. With that frame comes long arms and a wide blocking radius. For his size, Walker is also a relatively easy mover. He has an explosive get-off on the line, and he owns exceptional lateral burst, which he can use to adjust his blocking angles at a moment’s notice. Walker might not be an elite athlete in space, but he still has more than enough mobility.

In addition to his short-area burst, Walker has solid recovery athleticism. Furthermore, he’s flexible — both in his upper body and his hips. His flexibility and foot speed allow him to recover and guide edge rushers outside the pocket. It also helps him absorb contact, recoil, and impose his natural power. When in position, Walker has the tensile strength to negate edge rushers, and his grip strength holds up to resistance.

Walker is an exceptional physical talent at the tackle position, but the operational part of his game might be even more impressive. Here, he boasts the scouting report of a complete tackle.

Walker plays with good knee bend, and he’s able to lower his pad level and increase his leverage without struggle. He consistently keeps his shoulders square to his target and possesses solid leg drive blocking in motion. With his leg drive and grip strength, Walker’s mauler DNA shines through, especially as a run blocker. He always blocks to the whistle and isn’t shy about sending defenders into the dirt.

As his flexibility implies, Walker works extremely well in imbalanced situations. Explosive edge rushers can sometimes get a step on him and create displacement. Still, he has the balance, blocking range, and leverage awareness to hold his ground even at a geometric disadvantage.

Walker’s awareness is apparent in other situations as well. The Penn State OT easily recognizes stunts and takes care not to jeopardize his positioning. Walker has a high IQ, and he adapts quickly in the heat of the moment.

As if Walker’s profile wasn’t already strong enough, his hands also generate plenty of excitement. When Walker has proper positioning, he has the wherewithal to get under his opponent’s pads and extend quickly, establishing a robust anchor in pass protection. In addition, Walker’s hands can be extremely fast and violent, and he actively uses hip rotation to quicken his punches.

Coming into 2021, Walker’s scouting report is incredibly strong. In fact, one could make a case for Walker being the best offensive tackle in the 2022 NFL Draft at this point. Even so, there are a few areas the Penn State OT can focus on improving in 2021.

As good as Walker’s balance is, he can sometimes be thrown off his platform when faced by opponents with substantial power and length. Additionally, there are times when he’s caught out of position and is forced to lean. This further detracts from his balance.

In the same vein, he sometimes lurches when trying to match defenders around the edge. In that process, his footwork can be a bit choppy and staggered.

Among other things, Walker can be a bit more consistent with his hand precision, and his arms can be made vulnerable to swipes if he strikes too low. Moreover, his outside hand seems to be more inconsistent than his inside hand. Particularly against Michigan, there were a couple of instances where his left hand was wrenched down due to unstable placement.

On the proverbial prospect checklist, Walker covers most of the bases. At 6’6″, 320 pounds, he’s an exceptionally-sized player who’s reasonably athletic and flexible. On top of his athletic traits, Walker is smart, methodical, and malleable in the face of deception. Moreover, he has a tangible mauler mentality on run blocking reps.

Walker’s hands are already sudden and violent, and as he continues to refine his precision, he’ll only get better. As it stands, The Nittany Lion is a well-rounded tackle prospect with the potential to start and thrive at the NFL level.

Penn State has long owned a reputation for having one of the better training programs in the nation. As a result, the Nittany Lions regularly produce some of the highest-quality athletes on the NFL Draft stage. While James Franklin’s program no doubt deserves credit, player development is a two-part process. Yes, you need to train athletes. But you also need to find athletes to train.

Walker met the criteria for Penn State back in 2018. At that point in time, he was a four-star recruit and ranked as the 160th-best recruit in the nation on ESPN’s board.

The 6’6″, 295-pound tackle from Waldorf, Maryland, had offers from schools like Ohio State, Florida, Georgia, and LSU. Yet, at the end of the process, the three-time high school captain chose to embark on a four-hour trip to State College, Pennsylvania, and sign with the up-and-coming Big Ten squad.

Walker saw playing time as a true freshman, but it wasn’t enough for him to shed his redshirt designation. After playing in just four games in a reserve role in 2018, Walker returned as a redshirt freshman for the 2019 season.

Despite being just a redshirt freshman, Walker was thrust into an important role in just his second year. After losing left tackle Ryan Bates, the Nittany Lions needed a new blindside blocker, and they called on Walker to be the successor. Walker took his new responsibilities in stride, quickly becoming one of the better tackles in the conference.

The Penn State OT started all 13 games at left tackle in 2019 and carried that role into 2020, starting all nine games in his redshirt sophomore season. He earned All-Big Ten recognition for his play in 2020’s COVID-impacted season, garnering third-team honors from the media and an honorable mention from the coaches.