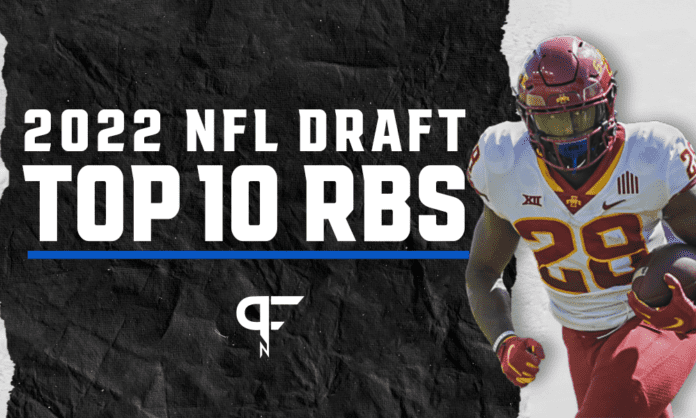 After a total of 18 running backs were drafted in Cleveland, which players now look to be the top RBs in the 2022 NFL Draft?

Despite an underlying thought process that “running backs don’t matter” in the NFL, there were two first-round selections amongst 18 players drafted this past year. Can the top running backs of the 2022 NFL Draft ensure a similarly successful selection event next April? Who will take over from Najee Harris and Travis Etienne as the best at the position in this upcoming college football season?

In the months between the end of the NFL Draft and the start of the college football season, we’ve poured over hours of tape to compile our top running backs for the 2022 cycle. Like any preseason list, these are subject to change throughout the year as some running backs blossom and others falter along the way. However, it presents a list of prospects to watch out for in the 2021 college football season.

A 17-game starter for the Texas A&M Aggies, Isaiah Spiller has been impressively productive over his first two college football seasons. As a true freshman, he put up over 100 yards on his debut while coming up just short of the magical 1,000-yard mark for the season. He remedied that in 2020 with a 1,036-yard campaign in a shortened season.

As we know, college production doesn’t always translate to the next level. However, Spiller has a translatable skill set that should ensure he’s in early-round consideration. Heading into the season, he’s the standard-bearer at the position, earning first-round selections in multiple mock drafts as the RB1 of the class.

At 6’1″ and 225 pounds, Spiller is built to withstand the rigors of the NFL. The thickly constructed running back has the requisite physicality to succeed, with impressive contact balance and the ability to grind out yardage. As you’d expect, he does his best work between the tackles, but his footwork and vision ensure he can win outside too.

Although there is a limited sample size, Spiller can be an asset as a pass catcher too. His physicality also allows him to be a willing and able blocker. As a result, he has three-down NFL potential. Even in a packed running back room at Texas A&M this fall, Spiller should solidify himself as the top RB in the 2022 NFL Draft class.

If this list of the top running backs in the 2022 NFL Draft were purely based on production, Breece Hall would comfortably sit at the top. A playmaking machine, the Iowa State rusher led the nation with 1,572 yards last season. He also ran in 21 touchdowns, averaged 5.6 yards per play, had the most rushing first downs, and ranked second for rushing plays over 20 yards.

Hall’s production was phenomenal last fall, and there’s every opportunity for him to be one of the leading rushers in the nation again. For many, he is the de facto RB1 of this class, and he definitely has some desirable traits that will help put him in the shop window for NFL teams during the upcoming season.

The Iowa State running back has excellent short-area explosion with decent long speed, natural elusiveness, and importantly, he has the vision to execute these attributes on the field. Like Spiller, he’s also an asset in the passing game with blocking and catching ability.

However, Spiller presents more of a physical presence and has the edge over Hall in terms of contact balance. Nonetheless, Hall should still be one of the top running backs in the country when the 2022 NFL Draft rolls around.

After a disappointing 2020 campaign where he managed a paltry 285 yards at 4.4 yards per carry, CJ Verdell has become something of a forgotten man as one of the top running backs in the 2022 NFL Draft. However, rewind just one year, and the diminutive Oregon Duck rampaged for 1,220 yards, 6.2 yards per carry, and 8 touchdowns.

That production pales in comparison to the lofty goal that has brought Verdell back to Eugene for another season of college football. In addition to delivering a national championship to the Ducks, he wants to be the first Oregon running back to surpass the 2,000-yard mark. Whether that is achievable or not is cause for debate.

What isn’t cause for debate is that Verdell has the skill set to be one of the top running backs in the 2022 NFL Draft class. Despite measuring between 5’8″ and 5’10” — depending on your source — he is one of the most physical running backs in the nation. He is the epitome of the phrase “angry runner.” He’s tough, strong, and it will often take multiple players to bring him down.

Behind that is an athletic profile that contains explosiveness, decent long speed, and impressive contact balance. With pass-catching ability in his repertoire, Verdell has a highly alluring profile as one of the top running backs in the nation.

While quarterback Ian Book parlayed Notre Dame’s run to the College Football Playoffs into a fourth-round selection, the true playmaker behind that Fighting Irish offense returns as one of the top running backs in the 2022 NFL Draft.

At 5’9″, Kyren Williams will undoubtedly be tabbed with the undersized moniker. Yet, his ability to impact the game towers far above his diminutive frame. Last season, Williams rushed for 1,125 yards at 5.3 yards per carry. He almost rushed for more touchdowns than Book threw for. His ability to contribute in multiple phases was evidenced by him outstripping tight end Tommy Tremble for receiving yards.

An explosive athlete who combines short-area burst with agility and long speed, Williams also boasts impressive footwork and vision. While those attributes are exciting at the college level, it’s the Notre Dame rusher’s ability to be physical as a blocker that will help cement his status as one of the top running backs in the 2022 NFL Draft.

Watching Tennessee is extremely bad for your health as a college football fan. As a player and NFL Draft prospect, it can be equally bad for your chances of making it to the league. The Los Angeles Chargers got a steal in wide receiver Josh Palmer, with the exciting pass catcher flying under the radar due to being hindered by the Vols’ diabolical offense.

The same could be said for Eric Gray. He only rushed for 772 yards at 4.2 yards per carry last season and has never broken the 1,000-yard marker at Tennessee. However, his transfer to Oklahoma to work under DeMarco Murray should ensure his full potential as one of the top running backs in the 2022 NFL Draft is revealed.

Gray is one of the most dynamic rushers in college football. The new Sooners starlet is elusive and explosive in the open field. He has the vision to find opening running lanes and contact balance to ensure he can extend runs beyond his first encounter with a tackler. Furthermore, he’s proven to be an exceptional pass catcher. Last season, he snagged 30 receptions for 254 yards and 2 touchdowns.