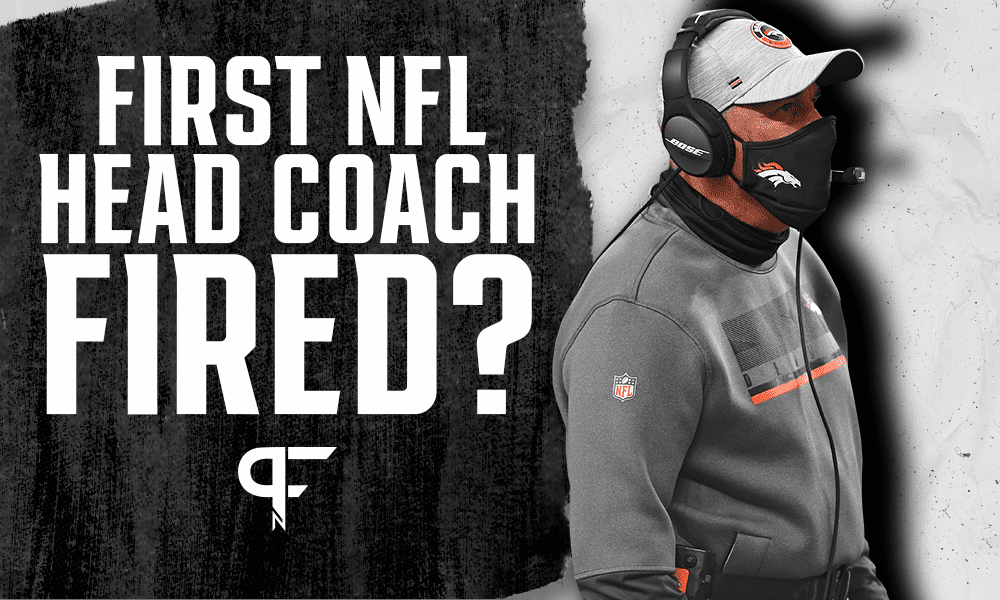 The last five NFL seasons have seen an average of 2.2 head coaches fired per year. With that in mind, what are the odds for the first head coach fired in the 2021 NFL season, and which candidates offer potential value?

The odds for the first NFL head coach fired are courtesy of BetOnline.

Who are the main candidates to be the first NFL head coach fired in 2021?

Let’s look at some of the candidates to be the first head coach fired during the 2021 NFL regular season and assess whether their odds offer value.

Entering his third season as the Denver Broncos head coach, it is crunch time for Vic Fangio. Through his first two seasons, the Broncos have finished a combined 12-20. After a somewhat promising 7-9 outing in 2019, the team regressed to 5-11 last season. The most concerning trend for Fangio is that his defense ranked 25th in points allowed and 21st in yards allowed.

As a defensive-minded head coach, Fangio needs his defense to step up in 2021 to avoid meeting the expectations of being tied atop the odds for the first NFL head coach fired. If the defense plays well, but the offense struggles under Drew Lock, Fangio may remain as head coach. However, Fangio has already changed offensive coordinators once, and a second change could be viewed as poor decision-making on his part.

Could Mike McCarthy be on his way out of Dallas in his second season? Given the struggles of the team in his first season — absolutely.

The issue for the Cowboys could be their defense. But a change of defensive coordinator Mike Nolan to Dan Quinn and some offseason additions to the defense will hopefully see the group improve. As the favorite to lose his job, McCarthy does not appear a good value given the loyalty we saw the Cowboys show to their previous head coach in Jason Garrett.

The key for Nagy is Justin Fields. If Fields struggles, or if Nagy refuses to turn to him with the team struggling, we could see the Bears make a change at head coach.

Although these odds appear to prevent value for Nagy as the first NFL head coach fired, a rookie quarterback can often be the saving grace for a coach on the hot seat.

Skipping over Jon Gruden due to the sheer expense the Raiders would incur by firing him, and we land with Mike Zimmer. The general feeling is that Zimmer commands a lot of respect. Therefore, at 64 years old, Zimmer might be allowed to finish out the year on the condition he retires.

The only caveat to that is if the Green Bay Packers allow Aaron Rodgers to leave. If that happens, and the Vikings do not take advantage early in the season, Zimmer could be on his way out the door.

Quite frankly, it was a surprise to see Kliff Kingsbury not at the top of the odds to be the first head coach fired in the 2021 NFL season. Kingsbury’s team and offense improved in 2020, but their season finished with a disappointing whimper. Now, they head into 2021 with a strength of schedule that is among the toughest in the league.

With Kyler Murray entering his all-important third season after being selected No. 1 overall in the 2019 NFL Draft, the Cardinals will be under the microscope. If Kingsbury cannot get the best out of Murray and this offense and turn it into victories, he may be in trouble. An opening spell of five games that sees them face the Titans, Vikings, Jaguars, Rams, and 49ers will certainly make life more difficult in Arizona.

It has been an ugly start to Zac Taylor’s head coaching tenure with the Bengals. In fact, Cincinnati has won just six games in Taylor’s first two seasons.

Most concerningly for the offensive-minded coach is that his offenses have ranked in the bottom 10 in both seasons. If that does not improve in 2021, and the Bengals get off to a slow start, Taylor might be looking for a new job early this season.

The first five games of the Bengals 2021 schedule will not help. Squaring up against the Vikings, Bears, Steelers, Jaguars, and Packers is not an easy task. If the Bengals begin 1-4 or 0-5, then these odds could be a good value for Taylor to be the first head coach fired in 2021.

There is no denying that Joe Judge made an immediate impact. While it seems as though his personality has initially worked in the Giants organization, that script could quickly flip. The Giants have invested in a big way this offseason, and that brings pressure. If the Giants struggle early in the 2021 NFL season, Judge could find himself on the hot seat.

When it comes to the odds for the first NFL head coach fired, the ultimate outsider is Sean McDermott. After the success the Bills enjoyed in 2020, it seems unlikely anything will happen to McDermott. Yet, 2021 is a key year for Josh Allen as the Bills decide whether to fully commit their future to the young quarterback.

What was lost in the Bills’ success last year was that the defense regressed significantly. If the Bills falter out of the gate, McDermott could quickly find himself in a negative light.