By Lucas Ellinas
May 14, 2021
Jump around this article Click to show
Aaron Rodgers’s MVP 2020 was his best statistical season in years
Rodgers also had a greater impact on the Packers offense in 2020
The existence of Jordan Love is a significant problem for Green Bay
What should the Packers do about Rodgers?
Want more NFL news and analysis?

The Green Bay Packers are in the midst of the largest controversy of the offseason. Evidently, star quarterback Aaron Rodgers is extremely unhappy with the decisions made by the Packers in the last several years and might attempt to force his way out of Green Bay. Rumors are swirling regarding the likelihood of Rodgers leaving, but in reality, only Rodgers and the Packers know the truth. What we do know is that Rodgers enjoyed one of the best seasons of his NFL career in 2020, making Green Bay’s decision far more difficult.

Rodgers being unhappy in Green Bay would be less of a problem for the Packers if 2020 wasn’t his best season in years. Rodgers threw for 4,399 yards, a league-leading and career-high 48 touchdowns, and just 5 interceptions on his way to winning his third MVP award.

The yardage total is similar to what he has produced in the last several years, but 2020 was the first time Rodgers threw for over 30 touchdowns since 2016.

Put simply, Rodgers generated easily one of the best seasons of his entire career at the age of 37. If the Packers were planning on moving on from Rodgers soon before the season started, that performance almost certainly made them reconsider their options.

It wasn’t just Rodgers’ box score statistics that improved dramatically in 2020. He performed better on several advanced metrics, including the Offensive Value Metric (OVM). The OVM is a grading system created by the (Bx) Movement to evaluate players based on how responsible they were for their produced statistics. As such, it allows us to assess how effective those players were within their respective offenses.

In 2020, Rodgers earned an OVM grade of 25.77, his highest grade since 2016 by more than five points. In the three seasons prior, he earned grades of 19.6, 20.68, and 19.68, each of which ranked in the bottom 10 in their respective seasons. On the other hand, his 2020 grade ranked 12th out of 41 qualifying quarterbacks. In short, not only was he one of the most statistically successful quarterbacks in the NFL last season, but he contributed more to his offense than most of his counterparts.

To explain Rodgers’ OVM improvements in 2020, we need to look at the advanced metrics involved in calculating a quarterback’s grade. For Rodgers, the most important of these were his completion statistics.

In 2020, Rodgers completed 70.7% of his passes, the highest in the NFL among qualifying quarterbacks. That number was 4.4% higher than expected according to the NFL’s advanced metrics, which was the third-largest differential.

Compare that to 2019, when Rodgers completed a below-average 62% of his passes. A lower completion percentage doesn’t always result in a significantly lower OVM grade, but that number was 1.7% lower than it should have been. In other words, not only did Rodgers complete a lower percentage of his passes in 2019 than in 2020, but he also underperformed according to statistical expectations.

For further evidence of Rodgers’ improvement in 2020, let’s examine his grades from each week of the last two seasons. You can see those grades in the charts below, represented by the black dots. For comparison, the yellow line represents the average grade for all quarterbacks during those seasons. 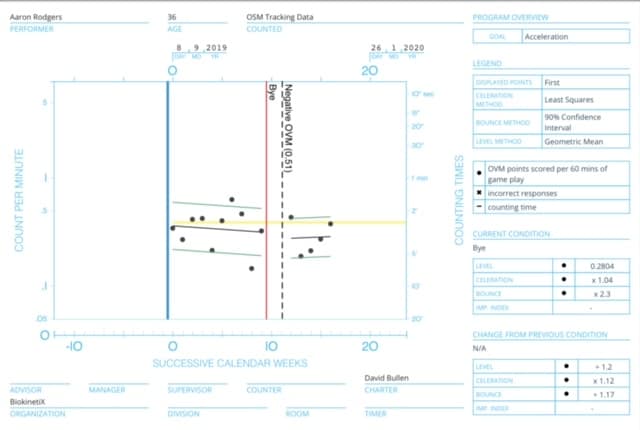 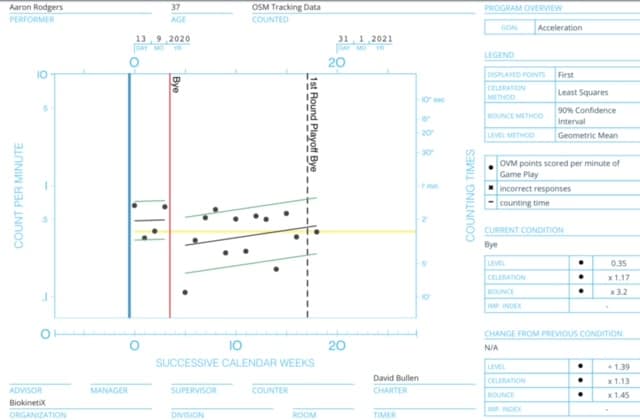 As you can see, Rodgers was rather inconsistent in both seasons. However, the range of grades was even higher in 2019. Rodgers’ highest grade from that season was solid enough, at 37.7. Still, that was his highest of the year by almost 10 points. Meanwhile, his lowest grade was in the negatives, at -0.51, the fifth-lowest grade received by any quarterback in 2019.

In 2020, Rodgers improved in both aspects. His highest grade was better, at 39.68, and he had five other grades above 30. And while his lowest grade was still relatively poor, at 6.55, it was still a notable improvement over 2019’s worst performance.

There is one more complication to this whole situation: Jordan Love. When the Packers traded up to draft him in 2019, they likely assumed that Rodgers would continue to decline. As such, Love could sit behind him for a couple of years, then take over when he was ready. Instead, as we have established, Rodgers had his best season in years, landing the team in the current controversy.

If Green Bay wants to keep Rodgers as their starter until the end of his current contract, or perhaps further, Love’s rookie deal will expire before he ever takes the field. The team will need to determine whether they want to give him a second contract without seeing him play in a meaningful game.

At that point, if they decide to resign him, they will be taking a serious risk. On top of that, they will have wasted his rookie contract. Teams often use those contracts to sign veterans and build around young stars. They won’t get the chance to do so with Love in this scenario.

On the other hand, if Green Bay chooses to move on from Love, they likely won’t be able to get significant draft capital from another team for him in a trade. They might instead have to release him.  Unfortunately, Rodgers’ sudden return to form, while great for him, might have Love’s NFL career as a casualty.

What should the Packers do about Rodgers?

Green Bay is in an undeniably difficult position, one that they are not entirely blameless for constructing. Where they should go from here depends on how long they think Rodgers’ current form will continue. In recent seasons, quarterbacks have proven that they can play at a high level into more advanced ages, Tom Brady being the prime example. That said, no player’s career lasts forever.

Fortunately for the Packers, Rodgers can’t force his way out of Green Bay this season. Other than simply refusing to play, he doesn’t have any real options. Assuming the Packers can appease him for at least 2021, they have another year to decide.

If they think Rodgers will continue to excel for at least the next few seasons, they can extend him, giving up on  Love. If not, they can make one last push in 2021 and then move on. In that case, the same scenario that we saw play out between Rodgers and Brett Favre a decade ago will happen again. As a result, a second consecutive Hall of Fame quarterback’s career will end with them leaving Titletown for greener pastures.