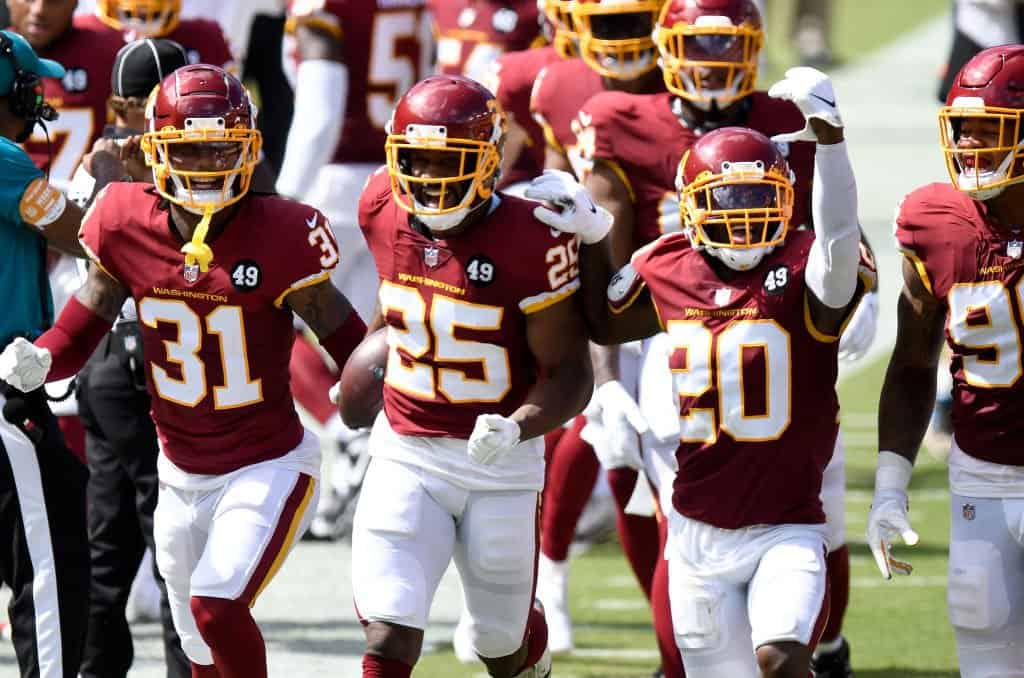 LANDOVER, MD - SEPTEMBER 13: Fabian Moreau #25 of the Washington Football Team celebrates with teammates after intercepting a pass in the second quarter against the Philadelphia Eagles at FedExField on September 13, 2020 in Landover, Maryland. (Photo by Greg Fiume/Getty Images)
What's in this article? Click to show
Washington safety Kamren Curl making plays in his NFL debut
Curl brings physicality as well as versatility to the secondary
How did his RAS translate to the field in his debut?

A dominant display by the Washington Football Team defense was the catalyst for their Week 1 win over the Philadelphia Eagles. While rookie defensive end Chase Young drew plaudits with an impressive NFL debut, another rookie quietly had a superb introduction to the league. Washington safety Kamren Curl helped the secondary overcome a shaky start with a strong showing in his first game in the NFL.

In a Washington safety group that contains former first-round pick Collins, and fourth-rounder Troy Apke, Curl may not be a household name outside of Washington, but the seventh-round selection in the 2020 NFL Draft made a name for himself in his debut.

In just one game, he already has half the tackle for loss production that he had during his three-year college football career at Arkansas.

That’s not to say he wasn’t a productive player at Arkansas.

Curl contributed 175 total tackles, four tackles for loss, two sacks, and three forced fumbles for the Razorbacks, demonstrating his ability to disrupt the game at the line of scrimmage and as a tackler in the open field.

With 15 passes defended, including two interceptions, one of which he returned for a 29-yard touchdown against Ole Miss, Curl also flashed playmaking ability in the secondary. He also showed versatility, playing cornerback in his freshman season.

Expected to return for his senior year, it was a surprise when he declared for the 2020 NFL Draft. Curl’s lack of interceptions during his Arkansas career led to some draft analysts knocking his draft stock.

Curl brings physicality as well as versatility to the secondary

What is apparent from his time at Arkansas is that Curl is an extremely physical safety. He combines prototypical size at the position with the strength to be a disruptive force in the game. You could say he puts the strong into strong safety.

His testing confirmed this at the 2020 NFL Combine.

We use Relative Athletic Score (RAS) to help demonstrate how a player’s athletic testing compares to other players at their position. It uses a simple 1-10 grading scale across several athletic components to create an overall score or RAS.

Curl received an overall RAS of 7.45 across the 2020 NFL Combine and his Arkansas Pro Day. He received good size, explosion, and speed grades with a dismal short shuttle and three-cone drill giving him a poor agility grade.

Curl excelled in several areas as part of his RAS

As mentioned before, at 6’1,” he has the requisite size that is coveted in the NFL, which gave him a height score of 8.16. With a 10’05” broad jump, he received an 8.97 score, which helped contribute to the good explosion score. Although his 4.6 seconds 40-yard dash was standard for the safety position, a 1.59 seconds 10-yard split received a higher score of 7.21, speaking to his short-area speed.

The most impressive element of Curl’s testing was in his display of strength. With 24 reps on the bench press, he received a 9.67 score. That ranked 24th out of 701 strong safeties that have attempted the bench press since 1987.

With one of the most athletic defenses in the NFL, Curl is a perfect fit in the secondary. The athleticism of the defensive line is well documented, but RAS shows that there is equal talent on the back end of the defense.

Akpe had a RAS of 9.94, an elite level of athleticism, which was made up of elite speed, agility, and explosion. Although he is the same height as Curl, he lacks the weight and strength to match his physicality.

Ronald Darby and Fabian Moreau also have overall elite RAS of 9.11 and 9.97. Although Collins (6.49 RAS) and Jimmy Moreland (6.19 RAS) don’t possess the same elite athletic profile, there is a blend of physical attributes that complement each other.

How did his RAS translate to the field in his debut?

Early in the first quarter, he put some of that athletic ability to good use. On an Eagles’ second and short deep in Washington territory, Wentz made a short pass to John Hightower, the speedy wide receiver out of Boise State. Curl made up some seven yards in a short time to force Hightower to the ground for a loss of two yards on the play.

That play alone was impressive enough, but it forced the Eagles into a third and five that would see Wentz sacked by Young.

Early in the fourth quarter, the Eagles were backed up at their 15-yard line on second and 20. Curl lined up as part of a seven-man box, and as Wentz threw a short pass to Boston Scott, he evaded the right guard, closed down on Scott, and stopped the running back for a six-yard loss.

Showing strength in the fourth quarter

On his final contribution of the day, Curl showed his strength to bring down 256lbs tight end Dallas Goedert at the first down marker. Once again, lined up as part of a seven-man box, Curl dropped back into coverage, and although Goedert had a step on him, Curl recovered to make the assisted tackle with linebacker Jonathan Bostic.

In addition to his 22 snaps on defense, Curl saw playing time on special teams with 18 snaps, showcasing the versatility that helps a seventh-round pick initially stick on an NFL 53-man roster before making the plays that help him stand out.

After making several plays and shining on his NFL debut, there’s every reason to suggest that Curl will be sticking around the NFL for some time to come.