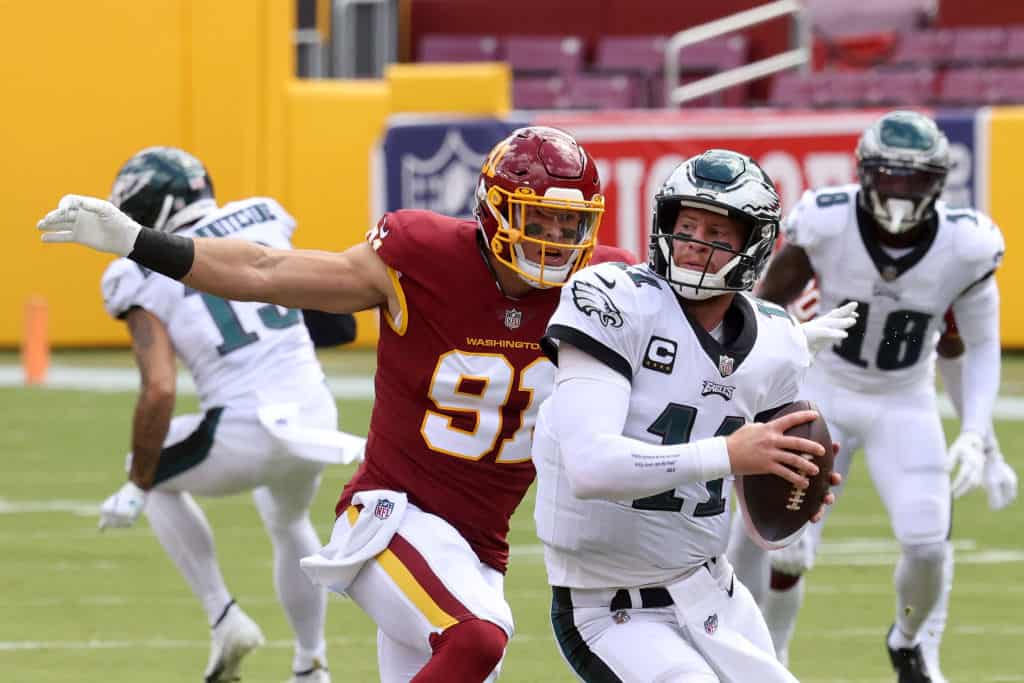 In the first half, the Washington Football Team looked exactly like the team everyone expected: inconsistent, uneven, and unable to capitalize on short bursts of momentum. In the second half, they flipped the script a full 180 degrees and completed a 17-point comeback en route to a 27-17 win against Philadelphia. In analyzing Washington’s Week 1 win against the Eagles, we’ll take a look at the key takeaways and factors that led to this surprising outcome.

A slow start in the first half

The Eagles were a comfortable favorite coming into the game, despite missing several key players, including Lane Johnson, and early on, they distinguished themselves with their polish and consistency.

For the larger part of two quarters, the Washington Football Team had less than 50 total yards of offense, and while they suffered from an inability to string together drives, the Eagles rode a strategic offensive approach from Doug Pederson to a 17-0 breakout.

Pederson frequently targeted Washington’s linebackers in coverage against tight ends Dallas Goedert and Zach Ertz, hitting each one for touchdowns. He also made quick use of first-round rookie Jalen Reagor‘s speed, hitting the TCU product with an early 55-yard pass from Carson Wentz.

Early on, Washington’s defense, while productive in the backfield, was prone to mistakes that led to big plays for the offense. This changed late, however, when Fabian Moreau snagged an interception that would turn the tides and lead to Washington’s first touchdown: A scoring pass from Dwayne Haskins to tight end Logan Thomas.

Washington entered the second half with some momentum after going down 17-0 early, and in the third and fourth quarters, they didn’t hold back.

Dominance in the final thirty minutes

The Washington Football Team scored the final touchdown of the first half, and they outscored the Eagles 20-0 in the second.

Dominance is the first word that comes to mind when one sees Washington’s second-half splits, but it wasn’t dominant in every phase. The team’s offensive unit still experienced inconsistency and only logged 258 total yards of total offense. But they benefitted from a supremely opportunistic defense, which frequently put the offense in good field position with game-changing plays.

Jimmy Moreland carried over the defense’s success to the second half with an excellent interception on Wentz, closing in on a high pass and wrenching it away from its intended target. Later on, Washington’s defense withstood two fourth-down conversion attempts from Philadelphia; one was stymied by a blitzing linebacker, while the other was undermined by an Ertz drop.

Washington’s defense played with a ton of speed and energy in the second half, and that energy trickled over to the offense, where Washington was able to capitalize on the defense’s turnovers and build a ten-point lead by the game’s conclusion.

The Eagles beat themselves as much as Washington beat them, but regardless, Washington will move into Week 2 with a record of 1-0, and they’ll travel to Arizona with a chance to build on their early success.

How did the Washington Football Team succeed?

Ron Rivera’s squad made a lot of little changes that counted in the second half on both the offensive and defensive sides of the ball, but the common denominator for the team’s success was the defensive line.

The Washington Football Team’s front seven logged eight sacks on Wentz. Ryan Kerrigan led the way with 2.0, Chase Young came in close behind him with 1.5 in his NFL debut (including a forced fumble), and Jon Bostic, Montez Sweat, Daron Payne, and Matt Ioannidis all had 1.0 each. Jonathan Allen also chipped in with a half-sack.

For Washington, it was their all-around athleticism on the defense that allowed them to keep putting pressure on the Eagles’ offensive unit. Wentz was rarely comfortable in the second half, and when he did have time to throw, the team’s athletic defensive backs did a nice job of maintaining coverage. Jimmy Moreland and Fabian Moreau, in particular, had stellar performances, and the secondary showed enough cohesiveness to mutually benefit the line.

Earlier in the offseason, we knew that Washington’s defensive line would be one of the most athletic units in the league, but we assumed they’d be on their own in buoying Washington’s defense. Instead, the line was able to help the secondary, and the secondary was able to correspondingly capitalize on the pressure generated. When a defense can turn in a complete performance as such, they’ll rarely find themselves losing control.

How can Washington improve in Week 2?

Dwayne Haskins showed improvement in the second half, after displaying a startling lack of comfort in the first two quarters. But the inconsistency shown by Haskins and the offense won’t contribute to a sustainable method of success moving forward. The offensive line has to be more reliable, and Haskins has to tighten down his fundamentals as well.

Haskins has the talent to earn more confidence as Washington’s quarterback, but on Sunday, his feet didn’t always match his upper body, and this led to inaccuracy at times. If Haskins can get in sync and play with more confidence and urgency, then the offense can start to match the defense’s impact that was so stark against the Eagles.