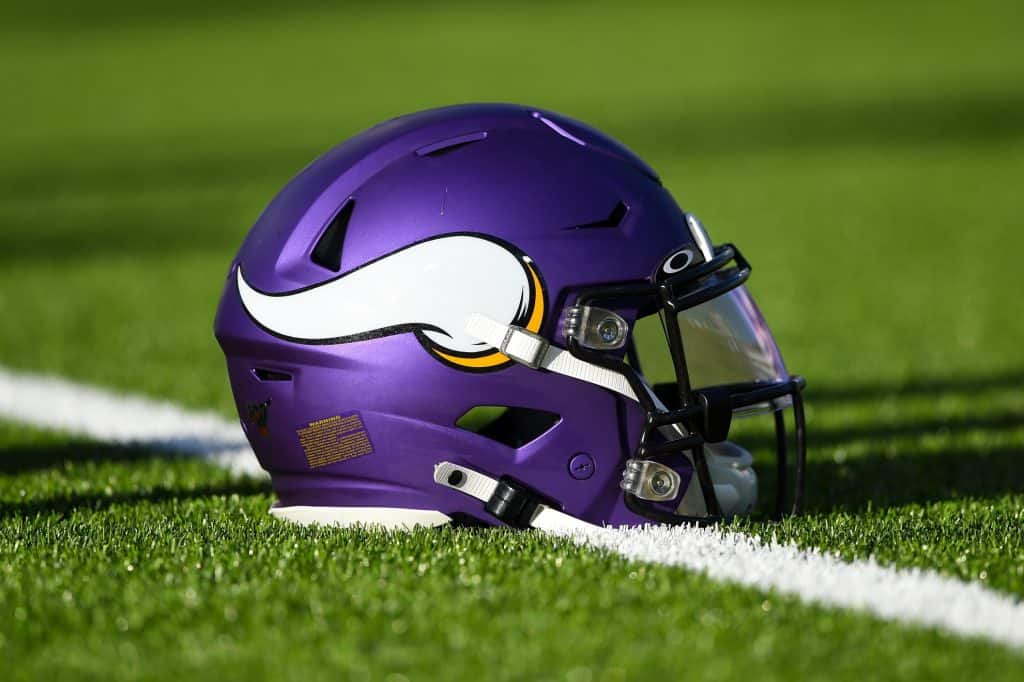 The Minnesota Vikings were in the playoff race for the majority of the 2020 season. They own one of the best skill-position groups in the NFL. Adam Thielen and Justin Jefferson make up a deadly receiving pair while Dalvin Cook is in the debate for best running back in the league. Kirk Cousins is fresh off a statistically stellar season, and Irv Smith Jr. is ready to become the team’s top tight end after sitting behind Kyle Rudolph early in his career. Adding depth at the receiving positions will be a priority on Day 3 of this 7-Round Vikings 2021 Mock Draft.

On defense, Minnesota benefits from the return of stalwarts Danielle Hunter, Anthony Barr, and Eric Kendricks. Outside of Hunter, the talent on the defensive line is uninspiring. The secondary is young outside of star safety Harrison Smith but inexperienced. 2020 first-rounder Jeff Gladney is also having off-field issues; his future with the team remains uncertain. If Minnesota wants to contend for a playoff spot this season, they’ll need to rebuild their defense in the 2021 NFL Draft.

An explosive edge rusher in the class, Azeez Ojulari has recorded 15.5 sacks over his past two seasons. As a redshirt sophomore, Ojulari became a force to be reckoned with in the SEC last year. He registered 12.5 tackles for loss and 9.5 sacks in 10 games.

Pairing stellar explosiveness with quality ankle and hip flexibility, Ojulari is a multi-faceted pass-rush threat. He possesses a reasonable frame and requisite play strength, but he’s not what you’d consider a standout run defender or edge setter. The former Bulldog flashed power at the point of attack but is still a bit of a “finesse” player.

Last season, Minnesota hoped they could create a dominant edge-rush duo in the NFL with Hunter and Yannick Ngakoue. Ngakoue only appeared in six games before the Vikings traded him to Baltimore. The Vikings can amend that failed experiment by pairing Hunter with their choice of edge rushers in the 2021 NFL Draft. In this case, I think Ojulari slots in perfectly.

He possesses the fewest concerns of the top edge rushers, making it easy to project success for Ojulari under Mike Zimmer. Minnesota starts retooling on defense by taking Ojulari in the first round of this 7-Round Vikings 2021 Mock Draft.

There seems to be no consensus view on Tyson Campbell. We all know he owns next-level physical tools, possibly the best in class. His speed, explosion, and length are all great among NFL standards. With proper development, it’s easy to see Campbell becoming a lockdown cover corner with the ability to play press man on any receiver in the NFL.

He must learn to get more physical at the catch point and stands to play with a bit more composure. Despite seeing action in 31 career games, Campbell was only able to register 1 interception. His lack of production on the ball is why he fell so far in this 7-Round Vikings 2021 Mock Draft.

Zimmer is well-documented as an exceptional developer of defensive backs. Campbell enjoys a rare physical skill set in the class and could be a clay ball for Zimmer to mold into a star once again. Campbell can play in a rotational role as a rookie, getting his feet wet and adjusting to the NFL speed.

Meanwhile, off the field, he can learn from a veteran like Patrick Peterson and absorb the wealth of information the Minnesota defensive staff has to offer.

A former defensive tackle at the University of Michigan, James Hudson transferred to Cincinnati and became an offensive tackle. He’s amongst the most challenging tackles to evaluate in the class. Impressive athletic traits and his flashes on film are first-round worthy. On the other hand, the flashes are only displayed on occasion. He must continue to progress his development along the offensive line before he can make a significant impact.

A lack of consistency and technical refinement is evident on tape. He isn’t ready to play in the NFL immediately, but his physical ability is enough to warrant an early selection. Bringing in a prospect as raw as Hudson allows a team to develop them in their desired mold. Of the Day 2 tackles, Hudson has the highest ceiling of them all. He could be the steal of the draft, and Minnesota gets him at 90th overall in this 7-Round Vikings 2021 Mock Draft.

One of the top run stuffers in the draft, Tyler Shelvin, is a massive human that dominates at the line of scrimmage. He possesses no real pass-rush upside and won’t generate more than 3 to 5 sacks in a season. Standing at about 6’2″ and weighing in at roughly 350 pounds, it is easy to see why moving him can be difficult.

He projects exclusively as a one-tech in Minnesota but should find playing time early in his career. After bringing in Dalvin Tomlinson and Michael Pierce, the Vikings remain committed to bolstering their defensive front.

The Vikings lost Anthony Harris in free agency this offseason and will need to address safety at some point in the draft. They signed Xavier Woods but still need to add young talent to the position group. James Wiggins was among the nation’s top safeties before tearing his ACL prior to his junior season. He returned for his senior year and was back to playing quality football.

He wasn’t as explosive as he was before the injury, but he’ll be two years removed by the start of his rookie season. Wiggins can play both safety positions and could challenge Woods for the starting spot in training camp. Wiggins will play as a rookie, whether it’s as the starting free safety or rotating in off the bench.

Arguably the fastest player in the draft, Anthony Schwartz will find work in the NFL thanks to his game-breaking speed. Despite the elite pairing of Thielen and Jefferson, Minnesota lacks depth behind them. Their WR3 and WR4 are Chad Beebe and Olabisi Johnson. Thus, targeting impact receivers on Day 3 is a necessary investment.

They don’t need to search for wideouts that may become well-rounded superstars but need to add complementary pieces. Fortunately for the Vikings, that’s precisely what Schwartz is. He can start as the third receiver and provides a deep threat that safeties have to respect. Simply by being on the field, Schwartz makes life easier for his fellow receivers.

Nate Stanley and Jake Browning are an underwhelming backup quarterback duo. We know Cousins is the starter this year, but Minnesota should consider a young QB with above-average physical tools in the 2021 NFL Draft. Davis Mills and Kellen Mond are solid options on Day 2, but the Vikings chose to wait until Day 3 here. Jamie Newman was considered the top quarterback prospect not named Trevor Lawrence, Justin Fields, or Trey  Lance heading into the season.

However, after transferring to Georgia, he opted out and never played a snap for the Bulldogs. Newman has the arm talent and athletic ability to make NFL-level throws and create plays out of structure. Yet, he must learn to play consistently on a down-to-down basis. His ball placement also needs refining, and it will take at least a season before he’s ready to see NFL action.

Kyle Rudolph is no longer a Viking, and Irv Smith Jr. is now the TE1. This leaves a hole at TE2, a role perfect for Michigan’s Nick Eubanks. He is a quality athlete, decent receiver, and a willing blocker. Eubanks has the potential to be a capable TE2 in Minnesota’s offense.

His presence would allow the team to be more creative with Irv Smith Jr. as well. The 2021 NFL Draft is quietly deep at tight end, causing a player of Eubanks’ caliber to fall to the fifth round. Minnesota continues to fill holes with talented players who fit their system in this 7-Round Vikings 2021 Mock Draft.

Despite already drafting Shelvin, the value of Marvin Wilson is too rich to pass up here. Considered a potential first-round pick as recently as last summer, Wilson struggled mightily this year, and his draft stock plummeted. Now, it is more likely than not he falls to the middle of Day 3, and if that’s the case, the Vikings would be wise to consider him.

Shelvin is exclusively a nose tackle at the next level, while Wilson would play as the three-tech in Minnesota. Going into the offseason, the Vikings sported the worst defensive line in the NFL. Following free agency and this 7-Round Vikings 2021 Mock Draft, they boast a unit that is among the deepest in the NFL.

A physically imposing receiver in the 2021 NFL Draft, this selection is just a swing for the fences. Josh Imatorbhebhe was dominant at his pro day. He posted a 46.5″ vertical jump, 11’2″ broad jump, 4.52 40-yard dash, and 24 reps on the bench. Originally a USC receiver, Imatorbhebhe transferred to Illinois and was decently productive his first year.

He amassed 634 yards and 9 touchdowns at 19.2 yards per reception. Minnesota makes this selection hoping they continue their trend of developing young receivers. Should Imatorbhebhe develop into a quality pass catcher and nuanced player, his physical traits could push him way past the traditional value of a sixth-round receiver.