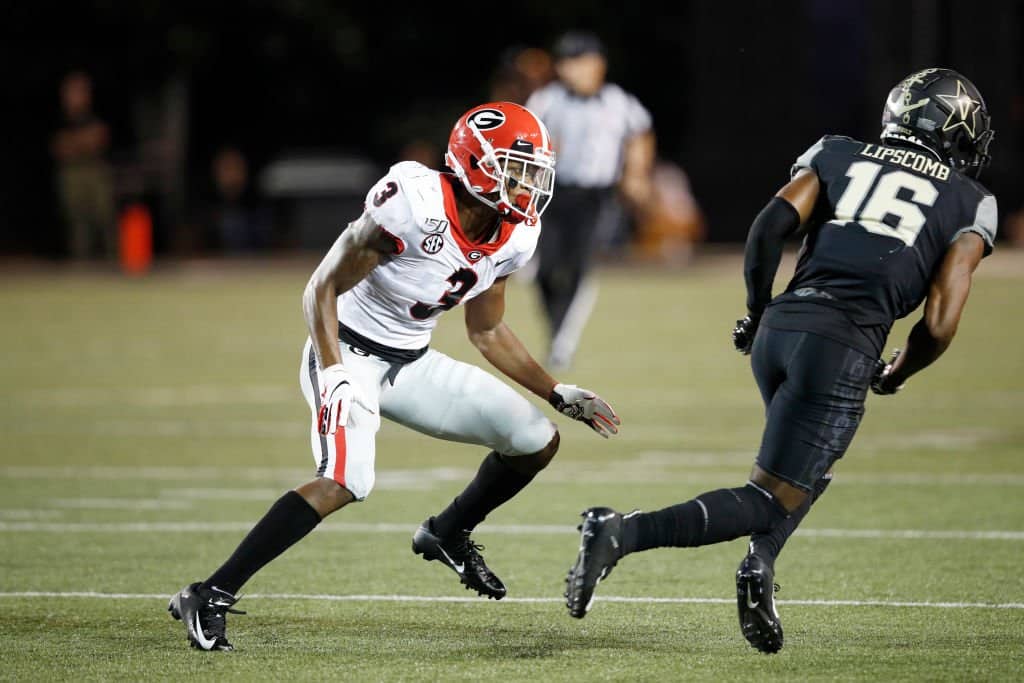 He was the number two ranked cornerback in the nation coming out of high school, but where does Georgia cornerback Tyson Campbell rank in this 2021 NFL Draft class?

Positives: Nice-sized, athletic cornerback who showed terrific development the past two seasons. Engages receivers at the line of scrimmage, quickly flips his hips in transition, and mixes it up with opponents throughout the route. Stays with assignments, sticks with receivers downfield, and stays on their hip out of breaks.

Battles throughout the play, displays a sense of timing on pass defenses, and has a burst to the ball out of his plant. Jars receivers at the point of attack, shaking the ball free. Fires up the field, works getting off blocks, and willingly defends the run.

Negatives: Slow getting his head back around and does a bit of face guarding. May struggle in bump-and-run coverage early in his career. Had a combined 1 interception and 11 pass breakups the past three seasons.

Analysis: Campbell possesses the size and underlying ball skills to start at the next level, but needs to continue to develop his game. He’s athletic and physical with the ability to line up in zone or man-off coverage. Campbell’s potential is enticing, and if properly coached, he could easily develop into a No. 2 corner on Sundays.

Campbell had a highly successful high school career. As a three year starter, he was a part of two FHSAA Class 5A title winning teams. Winning became a way of life, with a 50-5 record and two undefeated seasons. Despite falling in love with the cornerback position, Campbell also showed willingness to do what was best for the team, playing safety during his sophomore campaign.

Back on the football field, Campbell racked up 133 tackles, six interceptions, and seven pass break ups during his career. Impressing as a senior, he was voted to the USA Today All-USA First Team. Additionally, he was invited to the 2018 US Army All-America Bowl.

A five star recruit and the second ranked cornerback in the nation, Tyson Campbell chose to take his path to the NFL Draft through Athens, Georgia. He had the opportunity to follow high school teammate Surtain II to Alabama. Instead, the two would become rivals in the SEC, ultimately crossing paths multiple times.

Campbell made an immediate impact in Athens. As a freshman he made 11 starts, with his first pass break up coming in his debut against Austin Peay. In just his fourth game, Campbell recovered a fumble for his first career touchdown against Missouri. Later in his freshman campaign, he would set a career high for tackles in a single game with 11 against LSU.

Although he would set a career-high in pass breakups against Arkansas State, and add a second touchdown, his sophomore season would be marred by a five game absence due to injury.

Campbell would save his best for his last season with the Bulldogs. Starting all 10 games, he snagged his first career interception against South Carolina. He added five pass break ups. Meanwhile, he showcased an ability to disrupt the game in the backfield with two and a half tackles for loss.

Unlike fellow Georgia cornerback Eric Stokes, Tyson Campbell decided to play in Georgia’s bowl defeat with Cincinnati before declaring for the 2021 NFL Draft in early January.

There is no doubting that Georgia cornerback Tyson Campbell passes the eye test as an NFL Draft prospect. The NFL is in love with tall, long cornerbacks and he certainly meets that criteria. At 6’2″ Campbell has the requisite size to be a successful cornerback in the NFL.

Additionally, he brings a little versatility having played safety at high school. Although he projects to play purely on the outside in the NFL, that prior experience has additional benefits. Campbell has showcased a tough tackling ability that was no doubt honed from his exploits in the center of the field. He wraps up well when tackling as well as flashing strength beyond his slight frame.

As a high school sprinter it is no surprise that Campbell’s best attribute is his speed. He can go toe to toe with any speedy receiver down the length of the field. He has also showcased the ability to utilize his speed to blitz from the cornerback position. In addition to his speed he is extremely agile with loose hips. These are the things that NFL teams will absolutely love about him.

What are the potential concerns with Tyson Cambell?

Although cornerback play shouldn’t be based on box score scouting, one of the things that stands out from an NFL Draft perspective with Georgia cornerback Tyson Campbell is his lack of productivity. He has just one career interception and nine pass break ups. It doesn’t compare favourably with his competition in this class.

When you dig into his tape, it is easy to see why there is a lack of production. Time after time, Campbell puts himself in a position to make a play using his speed but lacks the ball skills to impact the play.

There is also a concern with his awareness which impacts his productivity.

Too often Campbell allows a receiver to separate and complete the catch because he isn’t aware of what the receiver is doing until it’s too late. There are multiple examples on tape but a few stood out to me.

Against Alabama, he would stick with DeVonta Smith until the last second when Smith would lose him simply by coming back to the ball to complete the catch, In that same game, Campbell isn’t aware of John Metchie III streaking behind him until it’s too late. He stumbles trying to impact the play and it results in an Alabama touchdown. Finally, against Tennessee he fails to get his head around on an over the shoulder touchdown to Josh Palmer. If Campbell had been aware of where the ball was, he could have attempted to make a play on it and prevent the touchdown.

Georgia cornerback Tyson Campbell has impressive attributes that will make him a desirable NFL Draft prospect. He projects to play outside corner in the NFL. Having played both man and zone coverage for Georgia he should be able to fit into any defensive scheme. Teams that have cornerback as a priority need include the Denver Broncos, Dallas Cowboys, Houston Texans, and Los Angeles Chargers.

In his latest big board for the Pro Football Network, Tony Pauline lists Tyson Campbell as his 43rd ranked NFL Draft prospect, fourth ranked cornerback, and gives him a second round grade. However, a potential run on cornerbacks could see him sneak into first round consideration.