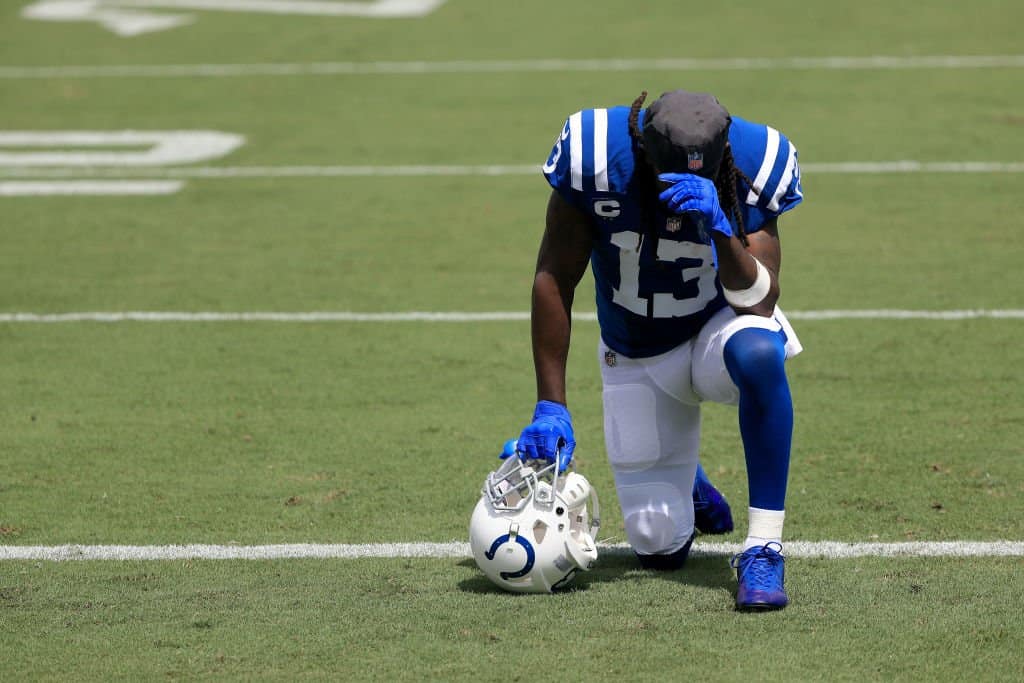 TY Hilton has been a fantasy football stud for almost a decade now. Most of those years were with fellow fantasy stud quarterback Andrew Luck, but recently, he’s started to fall off a bit in terms of on the field performance. Hilton is about to turn 31 in a couple of weeks, but should you worry about his struggles on the field and find a better option for your fantasy team? What is TY Hilton’s fantasy outlook moving forward?

TY Hilton’s fantasy performance has been as steady as they come since he entered the league in 2012. Hilton’s best year was 2016, where he caught 91 out of 155 targets for 1,448 yards and six touchdowns. He finished as WR5 on the year with 273.8 PPR points, a whopping 17.1 points per game (WR7). Fantasy managers were fine trusting him, and he kept producing for the next few years, at least until Luck retired.

In 2019, while playing with Jacoby Brissett at QB, Hilton finished with a meager 80.1 PPR points while only playing in 10 games. Obviously, injuries limited his season-long results, but even when he was on the field, Hilton’s eight PPR points per game were half of what he saw a few years prior. Fantasy managers started questioning whether or not Hilton would return to his former glory and saw his dynasty ADP take a nosedive, dropping to 83rd overall in Feb 2020. This was a clear sign that the fantasy community was beginning to move on from the once amazing fantasy player.

When the Colts signed veteran QB Philip Rivers before the 2020 season, there was some hesitation that Hilton would be able to regain his position as a true fantasy starter. The team drafted wide receivers Parris Campbell, in 2019, and Michael Pittman Jr., in 2020, essentially telling Hilton that the writing was on the wall. But Rivers has a history of leaning on a WR1 from his days with the Chargers; maybe Hilton would become Rivers’ Keenan Allen for 2020.

The 2020 season has been rough for both TY Hilton and the Colts younger receivers. Pittman was injured in Week 2, and Campbell followed with an injury of his own in Week 3. Both are currently on IR with the option to return, but in the meantime, Hilton should be their best remaining option at the position, but his stats don’t back that up.

For the season, TY Hilton is WR81 overall in PPR scoring with a total of 44.2 points. His best week was Week 6 when he caught 6-of-10 targets for 69 yards. Other than that, Hilton has been a bust in terms of fantasy. Hilton is also ranked WR80 in FPD (Fantasy Points Differential) with an atrocious -31% compared to his expected fantasy output. This kind of differential could be attributed to his lack of touchdowns, but it’s hard to put much of the blame on the QB, at least thus far.

For the year, QB Philip Rivers has been pretty reliable. PFN’s Chase Haynes wrote a great article highlighting Rivers’ OVM (Offensive Value Metric) of 29.6 and how it compares to his teammates. He stated that “Rivers’ primary wide receiver targets in T.Y. Hilton and Zach Pascal have season OVM grades of 28.34 and 27.84, respectively — very much in line with River’s grade.” If everyone is clicking, why is Hilton doing so badly for us in fantasy?

The Colts are currently 4-2 for the year and just coming off of their bye. This season, the team has leaned heavily on their defense, which has been a pleasant surprise. It’s entirely possible that Hilton and company just needed to reset and take a break before tackling the rest of their season, but what does that mean for TY Hilton’s fantasy outlook as we head down the stretch? Can you trust him going forward?

It’s hard to know exactly what to do with a player like TY Hilton in fantasy. DLF’s most recent dynasty ADP for October 2020 has Hilton at 132 overall, the lowest in his entire career. Suppose you currently roster Hilton in a league, either dynasty or redraft. In that case, odds are you’re going to have a hard time getting rid of him for anything of value, at least until he puts up a solid game or two, and once that happens, you might not want to since you’ve waited this long for him to perform.

PFN’s Ben Rolfe called Hilton a buy-low target because “Hilton’s schedule starting from Week 8 makes him an interesting trade target in fantasy leagues right now.” When you look into it further, Hilton faces Detroit, Baltimore, and Tennessee in the next three weeks. Detroit is fifth in DPAC (Defense Points Against Consistency) to WRs, and Tennessee is 11th, which means Hilton should be able to put points on the board those weeks fairly easily, barring an injury, of course.

Overall, TY Hilton’s fantasy value has seen better days. Still, given the landscape of the WR position for fantasy, the high amount of injuries and chaos each week presents, and Hilton’s track record for success, I think you can do worse than putting Hilton in your lineup. Yes, he’s struggled so far this season, but with the team looking ahead to the playoffs, I fully expect them to focus on Hilton in the passing game, helping your fantasy team in the process.