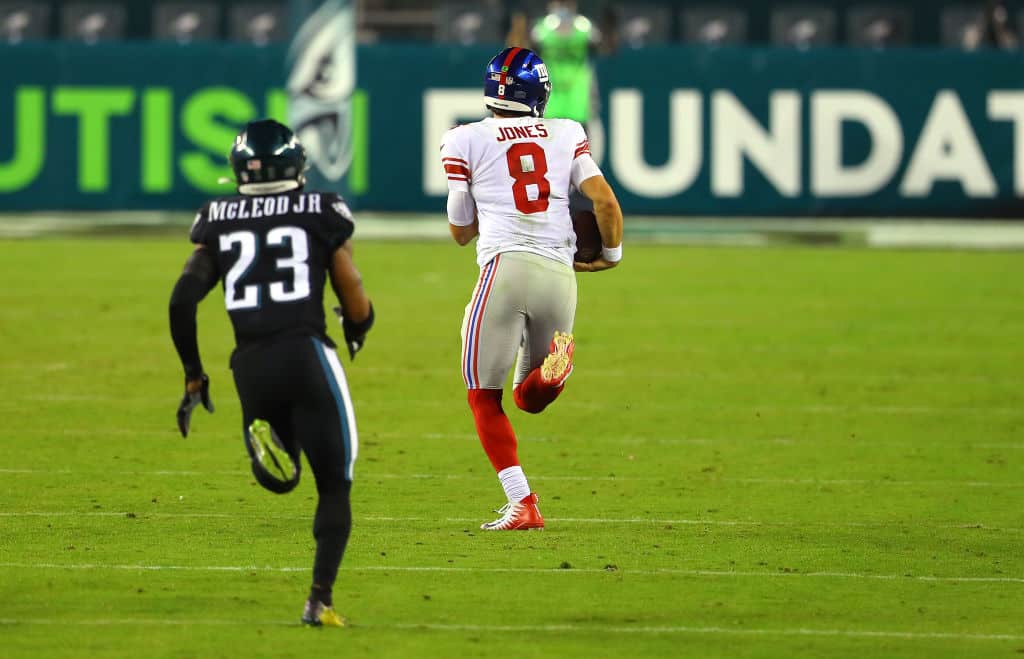 PHILADELPHIA, PENNSYLVANIA- OCTOBER 22: Daniel Jones #8 of the New York Giants runs against Rodney McLeod #23 of the Philadelphia Eagles for a first down during the third quarter at Lincoln Financial Field on October 22, 2020 in Philadelphia, Pennsylvania. (Photo by Mitchell Leff/Getty Images)
What's in this article? Click to show
Who are some fantasy football buy-low Week 8 trade targets?
Which potential trade targets should we be looking to sell high on?
More fantasy football coverage at Pro Football Network

The opportunities to make rapid improvements to your fantasy football roster are slowly ebbing away. You should know whether your team is a contender or a pretender at this point in the season. If your fantasy team is in contention entering Week 8, then identifying trade targets is crucial, be they a player to buy low on for the playoff run or a sell high to increase the depth on your roster elsewhere. Let’s take a look at eight such names whose values could be at their peaks or troughs entering Week 8.

Who are some fantasy football buy-low Week 8 trade targets?

This might require a little outside the box thinking a bit of a sell job in trade negotiations given Jones just had his best week of the season in Week 7. However, given this is the first time Jones has scored over 20 fantasy points this season and his next two games being against strong defenses in the Tampa Bay Buccaneers and Washington Football Team, it is certainly a feasible deal to make. If you cannot do the deal this week, wait until he is potentially taken to pieces by the Buccaneers defense coming straight out of Sunday.

You make this deal today as soon as possible because you want his current manager thinking about the short-term and not the long-term future. In Weeks 10 through 15, here are the defenses Daniel Jones matches up against: Philadelphia Eagles, bye week, Cincinnati Bengals, Seattle Seahawks, Arizona Cardinals, and Cleveland Browns. We just saw him roast the Eagles with his legs, while the Bengals, Browns, Seahawks, and Cardinals were all just involved in two games where 142 combined points were scored. That is a fantastic run of defensive opposition.

Additionally, I believe Jones is due for some positive regression with the return of Sterling Shepard to the lineup. The Giants have missed a reliable receiving option, and Shepard brings that to them, which should help Jones improve on his -31% Fantasy Points Differential through the second half of the season. Based on opportunities, Jones’ expected fantasy points are 10th highest at the position, so with the toughest part of the schedule nearly over, look for Jones to pick it up in the second half of the season.

The 49ers backfield has become a complete mess of injuries, but they perform well when players are healthy. This offensive line just turned Jeff Wilson into a superstar in New England before he was taken out by the 49ers running back injury curse. Coleman has so far struggled to make good on his opportunities this season, with a Fantasy Points Differential of -45%, but he is more talented than those numbers indicate. A return in Week 8 could see good things against a Seahawks team that just got shredded at times by Chase Edmonds coming off an exhausting overtime game. If he is then on the field in Week 9, he could be the key piece in a potential repeat of the 49ers offensive line mauling the Green Bay Packers for the third time in a row.

The Colts need to have spent their bye week working out their offensive issues, and if that is the case, Hilton could be the biggest beneficiary. After limited time to work together with leading up to the season, Philip Rivers and Hilton should be close to being on the same page. Hilton is another of these intriguing players where you could look to buy low entering Week 8 and then look to flip him in a move to sell high if he gets hot over the next couple of weeks.

Hilton’s schedule starting from Week 8 makes him an interesting trade target in fantasy leagues right now. Week 8 sees them take on the Detroit Lions. The latter gave up big days to Julio Jones and Calvin Ridley this past week before matchups with Baltimore, Tennessee, Green Bay, Houston, and Las Vegas all present opportunities for him to post monster numbers. The most important thing right now is the opportunity, and Hilton is getting enough to be of value.

Whether you can pull this off as a successful buy low entering Week 8 while simultaneously convincing the person you are trading with is also a sell high for them is a tricky needle to thread. It would be best if you were deferential because Engram had nine targets, but also be sure to point out he hasn’t found the end zone yet or gone over 50 yards since Week 2. However, those nine targets are a huge part of the reason I am high on Engram.

The Giants are desperate to get him going. Having Shepard back improves the chances he succeeds in the coming weeks. Teams now have to focus their attention on Engram, Shepard, and Darius Slayton, which should open up holes for Engram to have big plays. Engram shares the lead for red-zone targets for the team, and it feels like a matter of time until the touchdown drought ends.

I don’t know if there is a QB I am more confused about this season. One week, Brady looks like he is shot, and the next, he is dropping dimes all over the place. The biggest caveat I have for getting excited about this performance is that the Las Vegas Raiders have a somewhat anemic secondary, and their pass rush is not one of the most fearsome in the league. In his next five games, he will see three of the better pass rushes in the New Orleans Saints, Los Angeles Rams, and Kansas City Chiefs, so we could see him come back down to earth.

If you want to hold on this week, then that makes sense as the Giants entered Week 7 as the ninth-worst defense in terms of Defense Points Allowed Consistency Score. The Saints also ranked top coming into this week, so you may want to stand pat the next two weeks and then sell, but it should be something on your radar. With the Rams, Panthers, and Chiefs on the schedule in Weeks 10 through 12, followed by the bye, there is a tremendous opportunity to exploit the schedule. If you can use Brady as a player to sell high on entering Week 8, then you may have a chance to buy low on him later when his star has diminished a little, and he becomes an intriguing low-valued fantasy trade target.

This hurts me because I love James Robinson, but it is time to cash in on his value entering his bye week. Robinson finally got to the 20 carry mark in Week 7, but I am not sure we see it much more over the coming weeks. What makes Robinson such an attractive sell high opportunity entering Week 8 is that with matchups against the Houston Texans and Green Bay Packers coming out of the bye, fantasy managers may think they are buying low on a desirable trade target. Therefore, that would make them willing to overpay even further and offer you the opportunity to cash in. Robinson is a talented running back, but at some point, the potential return is too much to turn down. On a Jacksonville team that should be trailing a lot in the second half of the season, Robinson’s opportunities may very well be limited.

Over the last three weeks, Nelson Agholor has been impressive, with 15 targets, 11 receptions, 218 yards, and three touchdowns. Those numbers have seen him jump out to an impressive Fantasy Points Differential of 103%, second only behind Chase Claypool among qualified receivers.

The question is, how much longer can this continue? Agholor has proven repeatedly that fantasy owners should not rely on him, and after three straight double-digit weeks, it is hard to imagine his value getting any higher than it is now. Given the strength of his recent performances, we should see teams starting to focus more coverage in Agholor’s directions, leading to a drop-off in performance.

Consider me suspicious of a player with 14 receptions and three touchdowns on the season. Cook has been a touchdown-dependent option mostly this season, and when it pays off for a couple of weeks, then it’s time to cash in. Entering Week 8, Cook is an attractive trade target to try and move to another team because a Fantasy Points Differential of 35% is most likely not sustainable with Michael Thomas and Emmanuel Sanders expected back in the next two weeks.