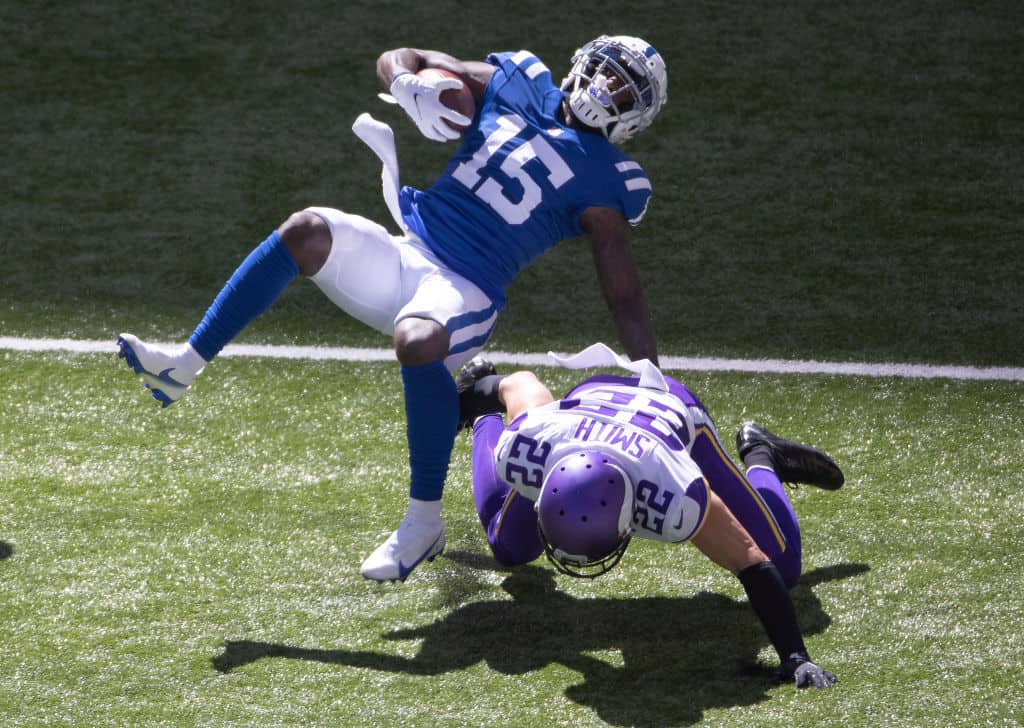 INDIANAPOLIS, IN - SEPTEMBER 20: Parris Campbell #15 of the Indianapolis Colts is tackled by Harrison Smith #22 of the Minnesota Vikings during the first half at Lucas Oil Stadium on September 20, 2020 in Indianapolis, Indiana. Campbell was carted off of the field for a knee injury. (Photo by Michael Hickey/Getty Images)
What's in this article? Click to show
Parris Campbell’s injury
Which Colts wide receivers will replace Parris Campbell’s slot production?
Michael Pittman Jr. among Colts receivers expected to step up

After starting slot wide receiver Parris Campbell was lost to injury on the second play of the game, Indianapolis Colts wide receivers T.Y. Hilton, Zach Pascal, and rookie Michael Pittman Jr. were forced to step up in his absence. Now, fantasy football managers are left to decide who provides the best value going forward.

Looking healthy and on the verge of a potential breakout fantasy football season, Campbell was one of Week 1’s biggest storylines. Unfortunately, Campbell only played two snaps in Week 2 before suffering a lower-body injury that will keep the wide receiver out indefinitely.

With Campbell out indefinitely, which Colts wide receivers are likely to step up in his absence? Let’s take a look at the candidates on Indianapolis’s roster.

After leading Indianapolis in both snaps and production at the WR position in Week 1, Campbell’s injury is terrible news for a Colts team expected to feature the second-year pro from Ohio State. Campbell led the Colts WR group with 61 snaps in Week 1, which he turned into 71 yards on six receptions.

Indianapolis looked to have a similar plan in Week 2, manufacturing a touch for Campbell on the second play of the game. Campbell’s seven-yard rush on second-and-5 might have given the Colts an early first down, but the ensuing injury made it the worst play-call of the season due to the result.

ESPN’s Adam Schefter reports that Campbell is out indefinitely after suffering a PCL injury. While it’s likely considered good news that Campbell’s ACL was unaffected, there remains the strong likelihood of a multi-week absence. Even when Campbell returns, any injury to the knee comes with added risks of re-injury and/or player ineffectiveness.

Once Campbell was lost early in Week 2, wide receiver Pascal moved inside as the Colts primary slot receiver. He didn’t add much in the box score (three receptions for 19 yards), but Pascal did catch a short goal-line touchdown to boost his fantasy numbers up.

Even if Pascal didn’t put up numbers in Week 2, that’s to be expected in a game in which Indianapolis dominated. Once their lead grew to double-digits, the Colts were content with leaning on the running game led by rookie workhorse running back Jonathan Taylor. For a better understanding of Pascal’s ability, it’s probably best to look at 2019 when he led the Colts wide receivers with 607 receiving yards.

Hilton is likely to see the majority of his work outside, but with Campbell dealing with a multi-week injury at a minimum, it wouldn’t be a surprise to see the veteran wide receiver used inside at the slot position. Hilton only has seven receptions for 81 yards through two games this season, so a move inside could be the boost that both the player and team need right now.

Michael Pittman Jr. among Colts receivers expected to step up

A 4-37-0 stat line isn’t winning you any fantasy championships, but the rookie’s usage is the biggest takeaway from Week 2’s victory. The Colts won’t be in a position to rush the ball 40+ times every week, so bigger days are certainly ahead for Pittman Jr. if he remains a full-time wide receiver.