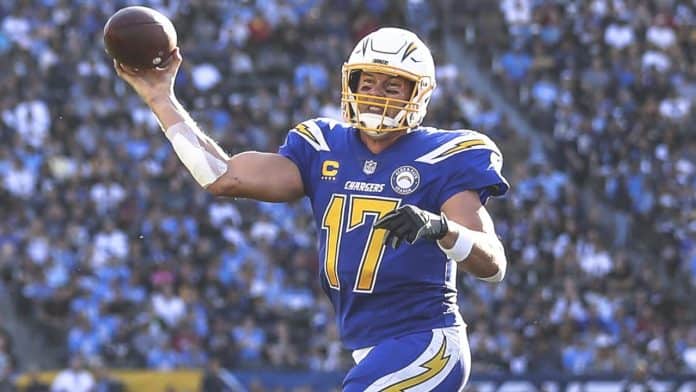 Philip Rivers and the Colts headline 2020's group of AFC playoff sleeper teams, with the Denver Broncos not too far behind.

The AFC throws out surprise playoff teams each year, and the Indianapolis Colts and Denver Broncos lead 2020’s list of potential newcomers.

As usual, the conference is led by a pair of powerhouses (the Kansas City Chiefs and Baltimore Ravens in the spots traditionally held by the New England Patriots and Peyton Manning’s teams), with a few sub-contenders (Houston Texans, Pittsburgh Steelers, Buffalo Bills, New England Patriots) and a bunch of teams clustered around .500, including some (hello, Tennessee Titans) with an inflated sense of their own playoff chances.

Philip Rivers could give the Colts an edge over the Titans, and perhaps the Texans, in the unpredictable AFC South. The Broncos are finally headed in the right direction after years of terrible drafts and wishful thinking at quarterback. The Cleveland Browns could also slip into the playoffs for the first time since 2002, but they earned their own Pro Football Network preview.

Here are quick rundowns of all the teams at the back of the AFC playoff chase, from the true hopefuls to the Jets, and beyond.

The Colts are the Buccaneers of the Midwest; they’re hoping that a legendary quarterback can immediately jumpstart a roster with lots of talented young pieces like guard Quenton Nelson and linebacker Darius Leonard. The Colts went 6-4 before losing five of their last six games, so it’s not unrealistic for them to believe that they were a quarterback away from the playoffs last year.

Related | Are the Indianapolis Colts the AFC underdog contenders of 2020?

Paying Philip Rivers $25-million to provide some playoff success at age 39 when he couldn’t provide the Chargers with playoff success from ages 23 to 38 requires an unhealthy dose of optimism. But it doesn’t make any less sense than giving Ryan Tannehill $62-million guaranteed for a brief hot streak.

Quarterback Drew Lock and wide receivers Courtland Sutton and rookie Jerry Jeudy have the potential to drag the Broncos offense into the 21st century after team president John Elway’s efforts to relive the glory of 1997 from 2016 through the middle of last year.

The offensive reinforcements arrive just as age and the salary cap have all-but torn apart the mighty 2015 Super Bowl defense, though Von Miller is still around and should get a boost from the arrival of Jurrell Casey and the return of Bradley Chubb. The Broncos could slip into the Wild Card chase if Lock produces Josh Allen-like erratic-but-explosive results. It’s more likely that Broncos playoff predictions are both a year too early and three years too late.

Derwin James suffered a meniscus injury at the end of training camp and will miss significant time. Up until that setback, the Chargers were enjoying a rare offseason of good luck, as if 2020 were a mirror universe where they were just fine and the rest of society had to spend our days in mortal terror.

For the first time since 2000, the Chargers enter the season without a quarterback named Doug Flutie, Drew Brees, or Rivers under center. Tyrod Taylor is likely to give way to Justin Herbert sooner than later; in the meantime, the Chargers can deploy plenty of weapons on both offense (Keenan Allen, Austin Ekeler, Hunter Henry) and defense (Joey Bosa, Melvin Ingram, Derwin James, and one of the league’s deepest secondaries). The Chargers appear to be a year away from finding their post-Rivers identity, but at least they aren’t sharing an Air B&B with a soccer team anymore.

The Raiders were 6-4 at one point last year, so they aren’t all that far from Wild Card contention, but Derek Carr remains their quarterback, proven talent is scarce at most positions, and the organizational direction remains a mystery.

Related | Are the Las Vegas Raiders pretenders or contenders in 2020?

Gruden started training camp by tricking players into thinking he had COVID-19 to teach some Arrested Development-worthy lesson about … not partying? Washing hands? Always leaving a note? That anecdote speaks volumes about the thought processes of the individuals running the Raiders and the reason they are moving sideways instead of forward.

Pope Clement VI survived the Black Death in the 14th century by spending his days surrounded by bonfires, which (inadvertently) kept disease-spreading vermin away. The Dolphins should have considered a similar strategy for rookie Tua Tagovailoa. The team is rebuilding and Ryan Fitzpatrick is on hand to soak up starts, so there’s no reason to rush Tua back from his November hip injury and expose him to the many risks and perils of 2020. But Tua participated in Dolphins training camp and is likely to take the field sometime this season. We’ll start paying attention to the Dolphins as soon as it happens.

Tom Coughlin may be gone, but the Jaguars remain a team that appears to be run by grouchy Facebook father-in-laws. Anyone who demands a new contract is labeled a troublemaker and traded away. Starting quarterback Gardner Minshew is a pesky 1970s throwback wish-fulfillment fantasy. The offensive philosophy last year consisted of acting like it was 1984 and that Leonard Fournette was Eric Dickerson. And now they are entering 2020 without Fournette, who was suddenly released on August 31.

The Jaguars appear to be in the phase that comes before a rebuilding phase, which is a heck of a position to be in at the start of Doug Marrone’s fourth full season as head coach and David Caldwell’s eighth (yikes!) season as general manager. They’ll lose a lot of games this year, but at least Minshew will look groovy in the process.

Adam Gase is a 2020 sort of leader: So thunderously, belligerently inept at every facet of his job that he Jedi mind tricks employers into thinking he must be an inscrutable genius. Gase waved the surrender flag in July by trading safety Jamal Adams, the team’s best player, erasing any expectation that he would be held accountable for this year’s results in the standings.

For his next trick, Gase will develop Sam Darnold with one hand while setting him up as a potential scapegoat for the team’s failure with the other. Other AFC East teams are lining up their windows of competitiveness now that Tom Brady is gone. Only Gase has the vision to put even marginal success off indefinitely.