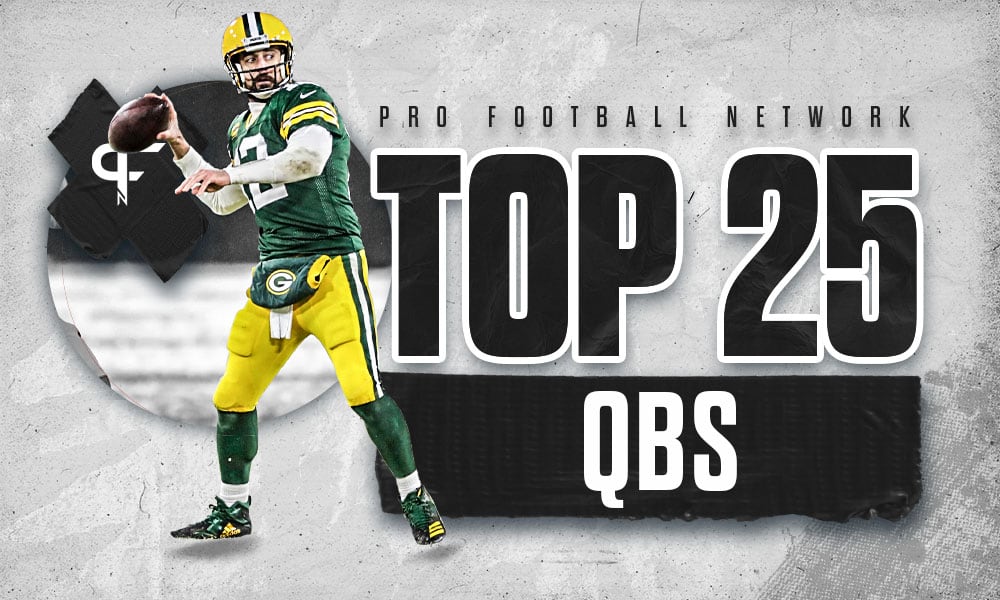 NFL passers are all the rage. Nothing new to see here. However, what has changed is an ever-evolving archetype at the position — a commonality you’re sure to find amongst my top NFL quarterbacks of 2021.

Today’s prototypical quarterbacks boast a combination of arm talent and athleticism. This specific playstyle is becoming more and more attractive amongst fans and front offices. Long gone are the days of statue signal-callers. The Joe Montana, Kurt Warner, and Peyton Manning-type guys have lost their luster — to a degree.

For instance, four of the five quarterbacks selected in the first round of this year’s draft are of a dual-threat nature, while only one is considered a pocket passer. Not only is this indicative of the positional demand, but it’s a testament to a new assortment of quarterback attributes being coveted by franchises.

In essence, if you can run like a deer and sling the rock, we’ll figure the rest out later. Just ask the San Francisco 49ers. With that said, No. 3 overall pick Trey Lance will not make this list. And it’s no fault of his own. I refuse to include rookies before they’ve played a snap of professional football. Still, unlike last year’s top 25 list, I will introduce second-year guys (as long as they make the cut).

Regarding my process, I base my rankings on the previous three seasons while giving a player’s most recent playing time more clout. I’ll take into account efficiency, consistency, as well as realistic expectations for the upcoming season.

Remember, this isn’t a starting quarterback list. Technically speaking, some teams will have no representation (again, sorry Chicago Bears fans). And since I had so many close calls at 25, I expect there to be some kickback. Teddy Bridgewater, Cam Newton, and Tua Tagovailoa — to name a few — just missed the cut.

Therefore, who did I conclusively find to be better? And most importantly, who do I consider to be the NFL’s top quarterback heading into 2021?

Between Weeks 14-17, Drew Lock completed more than 60% of his throws for 1,015 yards and a 7:2 touchdown-to-interception ratio. His 92.1 passer rating during that span was well above his 79.1 career number. So while the Denver Broncos’ brass traded for my 27th ranked passer (Bridgewater), I expect Lock to win the camp battle and pick up in 2021 where he left off in 2020 — playing more efficiently and protecting the football more consistently.

One season does not make a career. Before Carson Wentz‘s catastrophic 2020, the former Philadelphia Eagles first-round pick completed three consecutive seasons with 20 or more touchdown passes and single-digit interceptions.

Now, in Indy, Wentz can focus on looking forward instead of over his shoulder. He’s familiar with head coach Frank Reich and is surrounded by a talented group of athletes. If Wentz isn’t a top-16 NFL quarterback by the end of 2021, then something is, indeed, broken.

Gardner Minshew may very well be the NFL’s best backup quarterback in 2021. Entering his third NFL season, Minshew has 20 starts under his belt, including 5,530 passing yards and an impressive 37:11 touchdown-to-interception ratio. If (when) Trevor Lawrence proves to be the real deal, I imagine some team will come calling to acquire his services.

You wonder how Jimmy Garoppolo‘s year would’ve gone had he remained healthy. Not only did he miss 10 games in 2020, but he was also noticeably affected by the ankle injury while playing in Weeks 5-8. With the trading of immense draft capital to secure Lance in the 2021 NFL Draft, the writing is on the wall. Still, Garoppolo should start opening week and is just one banged-up year removed from leading his team to the Super Bowl.

Having turned the ball over 39 times in 27 games, Daniel Jones has been a turnover machine. Yet, there appears to be a shift in that concern as Jones limited such instances to just three in his final six games of 2020.

Moreover, Jones and the New York Giants might have stolen the NFC East if it wasn’t for his late-season soft tissue injury. As a result, his mobility diminished, coincidentally rendering him less effective. But with Saquon Barkley back in the lineup and an up-and-coming Giants’ defense, Jones and company are atop my surprise teams of 2021.

Jared Goff gets a lot of guff despite being a capable starter with some favorable tools. Don’t get me wrong. I’m not a Goff fan. Yet, claiming the Detroit Lions are the worst team in football now that Matthew Stafford is gone is a bit premature.

At just 26 years old, Goff has already participated in five postseason contests, including a Super Bowl. In fact, he’s garnered much more valuable experiences than his predecessor in half the time. With that said, I don’t expect Lions fans to fall in love with his dink and dunk approach.

In 2015, Ryan Fitzpatrick led the New York Jets to a 10-6 record, barely missing the playoffs. Fast forward to 2020, and Fitzpatrick was again on the cusp of January football with the Miami Dolphins before falling short.

It’s hard to believe the 16-year journeyman has yet to appear in an NFL playoff game, but 2021 looks to be his best opportunity. To put it simply, Fitzpatrick could mirror the past two seasons’ worth of production with a top-tier defense and plenty of offensive ammunition for a chance to play in the postseason. At 38 years old, it’s likely now or never.

The Cincinnati Bengals franchise quarterback is expected to play in the season opener in September. How effective he’ll be is of more significant concern, however. Before tearing nearly every possible piece of tissue in his left knee, Joe Burrow was playing about as well as a rookie can expect to play on a bad team behind a horrid offensive line. With significant improvements to that area and added playmakers, Burrow should be better.

Ben Roethlisberger may not be as nimble as he was at Miami or possess the same throwing velocity at this point in his career. But, where he’s declined in physical tools, he makes up for in savviness.

Entering his 18th NFL season, Roethlisberger made appropriate modifications to remain effective in 2020. He made quick, decisive reads leading to low sack totals and an 11-0 record out of the gate. Sure, the season fell apart from there, but do not discount this quarterback and head coach. I expect the Pittsburgh Steelers to bounce back as they’ll always be Super Bowl contenders with Roethlisberger under center.

Too often, Kirk Cousins is the butt of NFL quarterback jokes. Despite that, he continues to produce upper echelon numbers while leading one of the NFL’s highest-scoring offenses of the past two years. For instance, Cousins ranked third in 2020 for on-target percentage (80.24%) and tied for eighth in average air yards per completion (6.8).

Cousins is coming off back-to-back 100-plus rating seasons and has thrown 25 or more touchdowns in six consecutive years. Now, if he could play more consistently week-to-week and get defensive help, the win column should follow suit.

Next Page: Top QBs, who is No. 1?
RELATED ARTICLES
NFL Betting