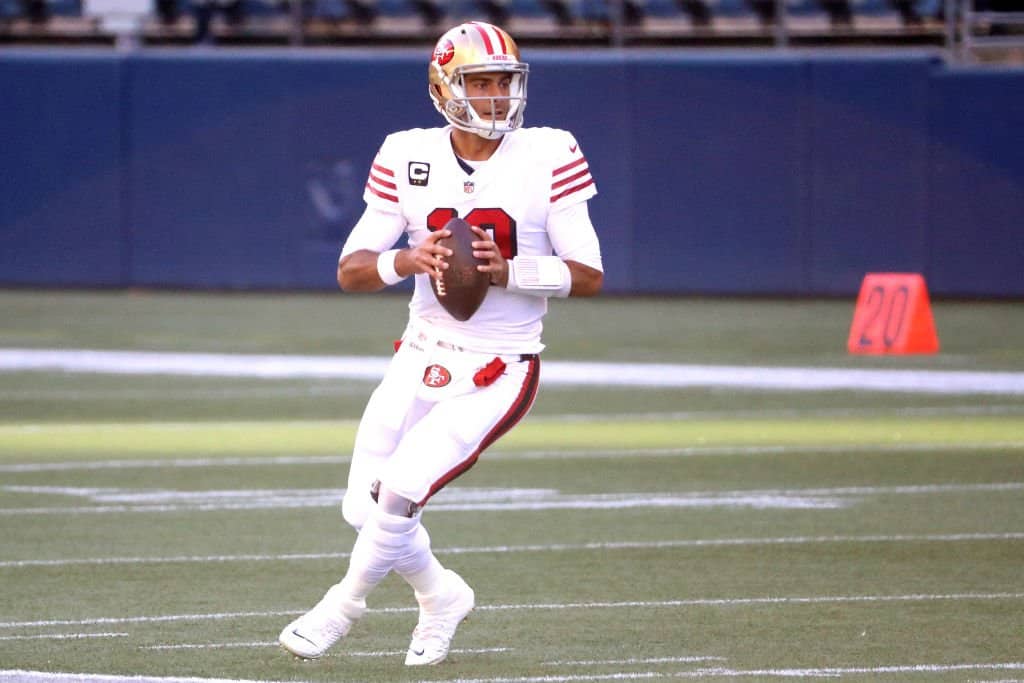 Since arriving in San Francisco and signing a new contract, Jimmy Garoppolo’s NFL career has been somewhat of a rollercoaster. Let’s take a look at the details of Garoppolo’s contract, his impact on the San Francisco 49ers’ salary cap, and what options the 49ers have when it comes to moving on from Garoppolo.

After a successful start to his career in San Francisco, the 49ers and Jimmy Garoppolo agreed on a new contract in 2018. The full details of the contract were reported at the time by ESPN’s Adam Schefter. The 49ers locked Garoppolo up on a five-year deal worth $137.5 million with $48.7 million guaranteed at signing. $74.1 million was guaranteed for injury. On April 1 in both 2019 and 2020, salary for those years became guaranteed.

The contract contained a signing bonus of just $7 million, with a further $28 million in a guaranteed roster bonus in 2018. Additionally, the contract has $0.6 million per year in workout bonuses and $0.8 million in roster bonuses per game.

Jimmy Garoppolo’s contract length is for a further two years

After signing his five-year deal with the San Francisco 49ers in 2018, Jimmy Garoppolo has two more years remaining on his contract. The final two years of the deal contains no guaranteed money — 2020 contained the final year of guarantees.

How does Jimmy Garoppolo’s contract affect the 49ers’ salary cap?

Garoppolo is set to count $26.4 million against the salary cap in the 2021 season. No player on the 49ers’ roster is set to have a higher cap number than that in the 2021 season. As of January 30th, the 49ers are projected to have around $10 million in salary cap space, with 55 players under contract. They have limited options when it comes to opening up more cap space in 2021.

However, the structure of Jimmy Garoppolo’s contract provides the 49ers with some options.

Can the 49ers move on from Garoppolo this offseason?

Since Garoppolo signed his contract, the 49ers have had mixed results.

Trading Garoppolo is an intriguing proposition

When he signed his deal, Garoppolo was the highest-paid quarterback in NFL history. However, when it comes to average value, he now sits as the 13th highest-paid QB in the NFL.

If the 49ers were to trade Garoppolo, he would leave just $2.8 million in dead money. That is due to the clever signing bonus and roster bonus structure the 49ers employed. The $7 million in signing bonus prorated across the contract at $1.4 million per year. With two years remaining, that constitutes the $2.8 million which would remain following a trade.

From the 49ers’ point of view, trading Jimmy Garoppolo and his contract is an easy call. They could potentially get a mid-to-late-round pick in return while opening up $23.6 million in salary cap space. The question mark becomes whether anyone is willing to take on Garoppolo and his $24.1 million in base salary in 2021.

In total, Garoppolo would count $25 million against the cap in 2021 and $25.6 million in 2022. Garoppolo would have the 11th highest cap number at the position in 2021 following a trade. Given his inconsistent play and his injury history, it is tough to imagine many teams willing to take that on. However, there will also be teams with cap space in 2021 who may view Garoppolo as a QB they can work with.

Trading for him in 2021 would provide a two-year audition with which to decide whether he is worth a contract extension.

If a trade market for Garoppolo does not materialize, then this is an option for the 49ers.

With such a small remaining prorated bonus and no guarantees, releasing Garoppolo would cost little. The remaining $2.8 million in prorated bonus is all that would remain in dead money. Meanwhile, the 49ers would open up $23.6 million in cap space, which they could use to build the team around a new QB.

What options would either a restructure or an extension provide?

Given what we have seen so far from Jimmy Garoppolo, a contract extension seems unlikely. However, if the 49ers believe Garoppolo is their man, an extension could certainly open up plenty of space. According to Over the Cap, an extension for Garoppolo could save the 49ers up to $18.9 million in 2021.

Perhaps a more realistic option would be for the 49ers to restructure Garoppolo’s deal. The 49ers could convert the majority of the $24.1 million Garoppolo is owed in base salary to a signing bonus. That could free up around $11.5 million in cap space. However, that would then increase the cost of cutting Garoppolo in 2022. Yet, that may not concern the 49ers with the salary cap expected to bounce back in 2022.