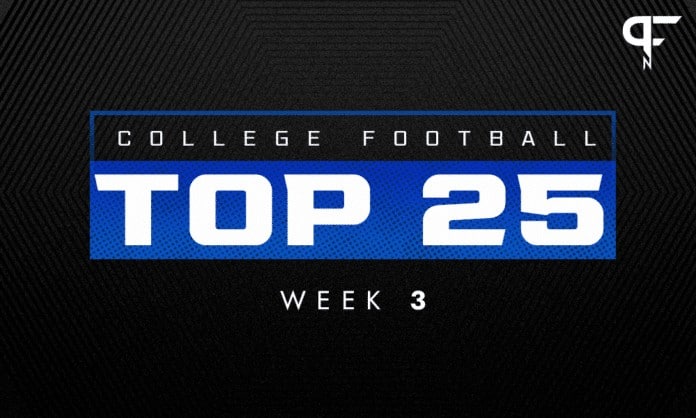 Let's go over our updated Week 3 NCAA college football top 25 rankings. Which teams moved the highest and lowest this week?

We’re at cruising speed now as Week 3 enters the rearview mirror. There’s a lot to digest and not much time before the action picks up again. What do our top 25 NCAA college football rankings look like after the third full week of games?

There’s only one minor change in our top five — and in fact our top 10 — after Week 3’s action.

Alabama beat a talented Florida team, so they maintain the top spot in our top 25 college football rankings without much incident. The Florida game was much closer than expected, however. But that’s not so much an indictment on Alabama as it is a validation of Florida’s potential.

Sometimes teams just need to take care of business, and that’s what Georgia did against South Carolina, crushing their weaker SEC opponent to the tune of 40-13. JT Daniels was back from injury and looked solid. And the defense once again smothered its opposition. Nolan Smith, Adam Anderson, and Jordan Davis all earned sacks, while Derion Kendrick nabbed an interception.

We can’t deny that Saturday was, once again, a bit of a letdown for the Sooners. The offense was out of sync at times under Spencer Rattler, and the defense also lacked consistency. Eventually, players like D.J. Graham and Nik Bonitto stepped up, earning Oklahoma the win. Nevertheless, the Sooners do not have a strong win on their résumé. A loss in the next four-game stretch could send them sliding.

The Aggies maintain their place in the top five of our top 25 college football rankings after shutting out New Mexico 34-0. Backup quarterback Zach Calzada played well, and throughout the matchup, Texas A&M’s talent shined through. Quarterback questions will persist even after Haynes King returns, but Texas A&M is a top-five team based on overall talent. If they keep winning, they’ll stay here.

Oregon and Clemson both came away with wins in Week 3, but the nature of those wins was stark in contrast. Oregon demolished Stony Brook 48-7, while Clemson snuck away from Georgia Tech 14-8. The Yellow Jackets are a more formidable opponent than the Seawolves, but Clemson’s offense once again underwhelmed. Oregon, meanwhile, appeared strong and well-balanced. Their Week 2 win over Ohio State proves they belong here.

Which teams fill out the 6-15 range in our top 25 college football rankings?

A large drop is rarely warranted after a win, but there are concerns surrounding Clemson right now. The offense’s anemic state might not have been solely a byproduct of Georgia’s defense in Week 1. Three weeks in, the Tigers are not moving the ball with the same efficiency we saw with Trevor Lawrence and Travis Etienne. Upcoming ACC play could be more eventful than expected.

The Buckeyes moved back here after their loss to Oregon last week. This week, they’ll stay in the seventh spot. Although they didn’t take control of the game until the second half, Ohio State bested a subtly talented Tulsa team 41-20. Outside of TreVeyon Henderson, the offense wasn’t efficient. Next week’s “battle” with Akron should provide a change of pace, but the Buckeyes haven’t proven themselves yet.

We said it time and time again — Saturday’s game against Indiana was Cincinnati’s first true test of the season. The Bearcats passed and proved they still belong in the top 10. That said, the Bearcats’ early October matchup against Notre Dame is even more important. If they win that one, the Bearcats could advance closer to the top five.

Transitive property, yo. Oklahoma beat Tulane 40-35. Ole Miss beat Tulane 61-21. Ergo, Ole Miss is better than Oklahoma. While we joke, that’s a conversation we could be having at some point. It’s too early to do that alone, but Matt Corral is a legitimate Heisman contender. The Rebels are clicking, and a strong SEC showing will legitimize their stock.

At this point, we know Iowa is good. They beat Kent State 30-7 in Week 3, keeping the wheel steady as they hold strong in the top 10. They’ve beaten every team they’ve played by double digits. And they have a couple of weeks until their next true test against the surging Penn State Nittany Lions.

Florida moving up this much after a loss? I know it seems irrational at first, but a loss to Alabama is different. Until this weekend, no one had proven they could compete with the Crimson Tide head to head. The Gators did that, and they were ultimately a botched two-point attempt away from potentially taking the game to overtime. Florida proved they belonged closer to the top 10, so that’s where we’ll have them.

The Boston College Eagles managed to get another strong win in Week 3, and this time without star quarterback Phil Jurkovec. The Eagles proved to be the superior bird against the Temple Owls, winning 28-3. The passing offense wasn’t nearly as electric under Dennis Grosel, so that may be a concern moving forward. Nevertheless, the offensive line looked great, and the defense logged 4 sacks. In a weak ACC, Boston College can stay up front.

Coastal Carolina’s win against Buffalo wasn’t nearly as decisive as we’d expected or preferred. Regardless, the Chanticleers maintain their standing in our top 25 college football rankings. The offense remains formidable with Grayson McCall, Shermari Jones, Reese White, Jaivon Heiligh, and Isaiah Likely. When they need to put points up, Coastal Carolina can certainly do it.

The Fighting Irish entered the week on upset alert, then controlled a surging Purdue squad and walked away with an undefeated record. Things haven’t been perfect for Notre Dame thus far, but Brian Kelly’s team possesses talent and hasn’t dropped a game yet. Contests against Wisconsin and Cincinnati may prove more difficult in the upcoming weeks.

The Nittany Lions crack the top 15 of our top 25 college football rankings after their statement win against Auburn on Saturday night. Auburn was a team trending toward our top 25 rankings, and they still have the talent to do so. But Penn State’s offense caused problems for Auburn all night, and the defense made Bo Nix uncomfortable. The Nittany Lions appear stronger by the week.

Who rounds out the final section of our top 25 college football rankings?

A shutout of Rice keeps the Longhorns where they were in last week’s top 25 college football rankings. The offense can be explosive with Bijan Robinson and Hudson Card — it’s just a matter of finding consistency.

The 2021 season has been a success so far for Jim Harbaugh. The win against Washington was the most notable, but Saturday’s 63-10 dismantling of Northern Illinois was equally decisive. The defense, in particular, is loaded with talent.

We talked about BYU being the first big test for the Arizona State Sun Devils, who’d been lingering near our top 10. Arizona State failed that test, falling to the Cougars by a score of 27-17. It’s not enough to knock them out since BYU was rising, but Arizona State’s days near the top are likely over.

Penn State moving up the ladder knocks North Carolina down one spot. However, for all operational intents and purposes, this is a lateral move for the Tar Heels. The offense appears to be clicking again under Sam Howell. If North Carolina can keep playing well through ACC play, they can start to move up again.

Fresno State has caused problems for teams all year. The Bulldogs gave Oregon a scare early in the season, and now, they’ve knocked down the mighty UCLA Bruins. UCLA drops a bit as a result, but they still reside in our top 25 college football rankings. In all honesty, the Bulldogs may find themselves on this list eventually as well.

The uncertainty of playing with an interim head coach is what makes USC’s stock so volatile. But one can’t deny that the Trojans look solid under Donte Williams. Jaxson Dart played well in relief of Kedon Slovis on Saturday and could keep the QB job moving forward. USC is still a contender, but they won’t get to redeem themselves against top-25 competition until later in the year.

With back-to-back wins against Utah and Arizona State, the BYU Cougars are the next team to break into our top 25 college football rankings. Kalani Sitake has done a great job to keep the Cougars competitive after Zach Wilson’s departure. Jaren Hall and Tyler Allgeier have great potential, and the defense has been noticeably productive.

The TCU Horned Frogs were among the few college football teams to have a bye week this week. Thus, they stay put at 23rd overall. They’ll need every bit of rest they can get. After the bye, they have consecutive matchups against SMU, Texas, Texas Tech, and Oklahoma.

It was a toss-up between Arkansas and Michigan State for the next new addition to the top 25 college football rankings. Michigan State’s win against Miami (FL) was impressive, but the Hurricanes seem to have been overrated from the start. Meanwhile, Arkansas has a more legitimate top-25 win over Texas, and they’re only trending up.

Will Levis wasn’t quite as sharp against Chattanooga in Week 3, but to his credit, he rebounded from a couple of early interceptions and helped his team grind out another win. Kentucky will need to show up more consistently against SEC opposition. They’ve already won against Missouri, but future games against Georgia and Florida won’t be as forgiving.