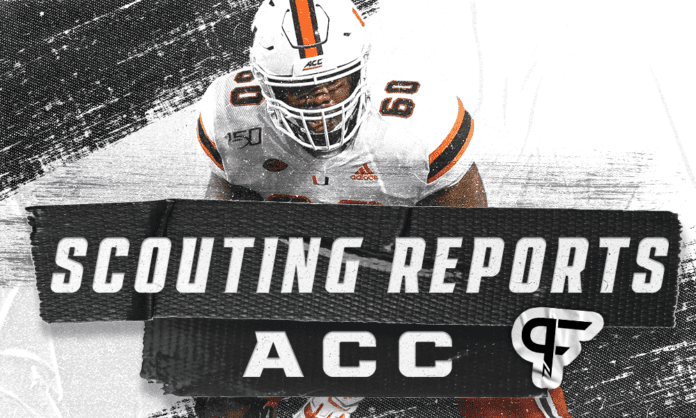 Tony Pauline continues his annual Preseason Summer Scouting series with scouting reports on the 2022 NFL Draft prospects from the ACC.

With the 2021 NFL Draft behind us and the college football season around the corner, it’s time to set our eyes on the next group of NFL hopefuls that could be available next April in the 2022 NFL Draft in Las Vegas. As such, in this edition of my annual Preseason Summer Scouting series, we’ll take a look at the draft prospects and scouting reports from the ACC.

All of my ACC previews are below. To view my grades and projected draft rounds for ACC draft-eligible prospects, scroll to the end of the article.

Who are the 2022 NFL Draft prospects to watch from each team in the ACC?

The past few drafts, it’s been a player here and a player there for Boston College. And though seven BC players on my board presently have draftable grades, they are all Day 3 prospects.

Many were shocked that offensive lineman Zion Johnson returned for a second senior season rather than entering the 2021 NFL Draft. I’m told he was coaxed back to Boston College after coaches convinced him he would develop into a first-round left tackle. I disagree on both fronts — Johnson won’t be a first-round prospect, nor will he play left tackle in the NFL.

First, he lacks the height and footwork to hold down the position in the pros. Johnson’s best games have been at guard (watch the 2019 Notre Dame film) when he is put in motion and destroys opponents. And that’s where I think he’ll line up in the NFL, most likely in a zone-blocking system.

There’s a lot of love for quarterback Phil Jurkovec outside scouting circles, and I understand it. Jurkovec has the size and arm strength to lead a franchise at the next level. He can make all the throws and easily gets the ball downfield with a flick of his wrist. To his credit, Jurkovec improved as the season progressed in 2020. However, the big-armed QB needs a ton of work on his pass placement and accuracy before he’ll be a top-ranked signal-caller.

Tight end Trae Barry made the right career choice in transferring from Jacksonville State to Boston College. Barry played both the fall and spring seasons for JSU last year. He’s a tall pass catcher at the position with nice size as well as growth potential. I currently grade Barry as a fifth-round prospect, which is much higher than scouts, but I firmly believe in his potential.

Isaiah Graham-Mobley transfers to BC from Temple and hopes to get his game back on track. Graham-Mobley played like a potential Day 2 pick early in his career, but his game has regressed since. He’s an athletic pursuit linebacker who can play on all three downs.

Can it get any better in the draft for Clemson after boasting the first overall pick in 2021? Especially someone in consideration as a generational quarterback. Not any time soon, though the Tigers still have a good number of Day 2 prospects for the 2022 NFL Draft.

Obviously, receiver Justyn Ross is the one player who could break into the first round if he’s healthy, has a big year, and passes pre-draft medicals. Ross was dominant early in his Clemson career before being sidelined with a neck injury last year. There were rumblings he would enter the 2021 class, but he made the right decision to return for another season at Clemson.

There’s nothing outstanding about Ross from a size/speed point of view, but he’s an incredible receiver with a polished game. Some scouts I’ve spoken with tell me they’ve graded him as a mid-first-round pick off prior film.

I’m very high on offensive lineman Jordan McFadden, who’ll move to the left side after starting at right tackle in 2020. He’s fundamentally sound, strong, and mobile. McFadden comes with average size and may ultimately move into guard on Sundays, but he offers starting potential.

Junior cornerback Andrew Booth Jr. flashed ability last season at nickel back. He possesses the size and skill to develop into a starter on Sundays.

Defensive tackle Tyler Davis is a sleeper of sorts. Rotated into the lineup last year, he’s a powerfully built lineman who stands up double-team blocks and flashes playmaking ability.

You have to love the Duke program. They can’t play with the big programs every single week of every single season. Yet, they find ways to win and get into the postseason. They’ve also had a decent share of first-round selections, something I don’t see happening for a while.

The top prospects are on the defensive side of the ball, starting with linebacker Shaka Heyward. He is an athletic defender who covers a lot of area in pursuit while occasionally forcing the action upfield. Just a junior, Heyward offers next-level size, speed, and has terrific upside.

Josh Blackwell is graded as a potential fifth-round pick on my board, higher than most scouts have him listed. Truth be told, my grade is based on the 2018 and 2019 film, as Blackwell played just two games last season. He’s a long, athletic corner with solid ball skills who can double as a return specialist.

Some scouts grade Leonard Johnson, Duke’s other corner, as a fifth-round prospect. He offers better size than his teammate and plays physical football. Still, Johnson struggles to make plays with his back to the ball, which is why I grade him as a late sixth-round pick.

It’s been a long drop from the top for Florida State. The program that once put five players into the first round of the draft almost annually has watched that number dramatically fall. And the 2022 NFL Draft could be Florida State’s worst showing in years.

Linebacker Amari Gainer is the top-rated Seminole on my board. He’s an explosive run-and-chase linebacker with safety size.

If there is one player who could break through for FSU, it’s Georgia transfer Jermaine Johnson. The athletic pass-rushing defensive end has great size and speed, but he started just four games at Georgia and was never a consistent producer.

Two additional transfers, both from Central Florida, could make draft noise if they return from injury.

Cornerback Brandon Moore had all the makings of a first-round prospect in 2018 before being shelved by a devastating knee injury that kept him on the sidelines the next two seasons.

The last memory most have of McKenzie Milton was the devastating and gruesome injury he suffered several years ago. Milton is a smart RPO quarterback who, like Moore, must show no ill effects from playing so little football the past few seasons and turn in a productive 2021 campaign.

Georgia Tech, the program that gave us the likes of Calvin Johnson and Demaryius Thomas, has had little success in recent drafts. However, even though they have no early-round picks on the board, the arrow is pointing in the right direction for the future.

Cornerback Tre Swilling, son of Georgia Tech legend Pat Swilling, has been a bit of an enigma. After a brilliant freshman season, Swilling’s game has leveled off as he has played spotty and inconsistent football. He possesses the measurables and ball skills to play on Sundays but must elevate his game.

The Yellow Jackets have a pair of graduate transfers to keep an eye on.

Devin Cochran is someone I graded as draftable when he was an underclassman at Vanderbilt. Initially scheduled to play for Georgia Tech last season, he opted out but returns to the field this year. Cochran is a big, mauling tackle prospect with decent feet.

Keion White is a nice-sized pass rusher who transferred from Old Dominion, one of the few I-A programs that canceled its entire slate of games in 2020. White is quick off the edge, has a closing burst, and displays great athleticism in his game.