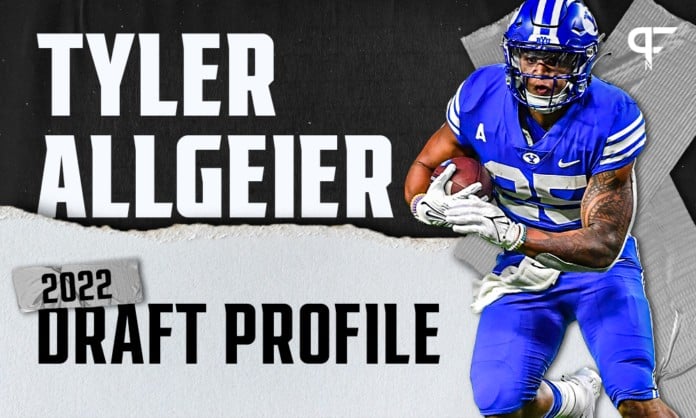 After riding the 2020 season to stardom, is BYU RB Tyler Allgeier's NFL Draft scouting report worth a look in the early rounds?

The depth of the 2022 NFL Draft running back class seems to be an improvement from 2021’s group. BYU RB Tyler Allgeier is a big part of that, as his scouting report could provide ample value for teams. One of the premier playmakers in the west, what does Allgeier bring to the table as an NFL Draft prospect?

Quarterback Zach Wilson wasn’t the only BYU offensive player to emerge in 2020. Allgeier also broke out with Wilson, breaking the 1,000-yard mark a year after logging just 20 total touches on offense. He’d always flashed potential, but 2020 was the year that potential met opportunity for Allgeier. And he ran away with it, both literally and figuratively.

Now, Wilson is gone, and there’s added pressure on Allgeier to be the Cougars’ chief playmaker. Allgeier’s performance will be scrutinized at a higher level this season. With a good year, he could be an early-round draft pick. But with a regression, he could sink into the depths of the RB class. What are Allgeier’s strengths, and what might keep him from breaching Day 2?

Allgeier undoubtedly has a desirable athletic profile. The BYU RB brings exceptional overall mobility, and he also has great size at around 5’11”, 220 pounds. For his size, Allgeier brings superb explosiveness in open space. When he has a runway, he’s hard to catch. Allgeier can hit a second gear and get around the edge with speed. He also has smooth lateral elusiveness, making guys miss and adjusting his rushing angles with ease.

Going further with Allgeier’s mobility, the BYU RB has supreme looseness in his hips. He can quickly execute misleading double moves to adjust angles, and he has some measured twitch when running through congestion. He possesses fairly good balance in and out of cuts. He’s a shifty runner, and he’s reasonably slippery through weak tackles.

Moreover, Allgeier has good contact balance and leg churn through congestion. With his density and burst, he can leverage explosions into massive point-of-contact force. And with his size, he can withstand direct contact and grind out tough yards.

Allgeier’s blend of athleticism and size is extremely valuable, but he provides utility beyond his physical traits. Allgeier has above-average vision, and he can identify cutback lanes and shoot through them with burst. The BYU product’s initial vision is his strongest. He’s decisive when he sees a hole to attack, and he attacks space with energy. Additionally, Allgeier possesses the long speed to prolong opportunities.

The BYU RB has shown he can adjust his stride lengths based on how much space he has. To that end, he can effectively manipulate space and negate tackling angles on the fly. Meanwhile, in short-yardage situations, Allgeier shows off tangible second effort against resistance. He absolutely plays to his size when coming downhill.

Perhaps the most exciting thing about Allgeier’s executional profile, however, is his receiving potential. He’s a capable receiver out of the backfield. He can sit in open zones and adjust for passes. Furthermore, he can corral the ball and seamlessly transition into YAC mode. He’s a smooth receiver, and while he hasn’t been used a ton in that phase, he has the skills to take on a bigger workload.

Rounding out Allgeier’s strengths, he is a solid pass protector. He has the awareness to chip on play-action, and he squares up with his full frame.

Allgeier is a fun player and a good one. But he does have room for improvement, as well as questions surrounding his NFL Draft scouting report.

First off, let’s talk about Allgeier’s vision. While he has excellent initial vision behind the line, he doesn’t always show full-field vision when he needs to adjust. He sometimes charges straight into contact, not utilizing his full creative potential, and he can prematurely commit to holes that close quickly. On the flip side, Allgeier freezes up at times when lanes are clogged up. He’s not always proactive at creating with his elusiveness, and he can’t always withstand contact in the backfield.

While Allgeier has good explosiveness, it is over longer spaces than shorter ones. Other backs have more immediate explosion. Allgeier doesn’t always gear up right away, and he needs some space to work up to his top speed. Furthermore, he can run a bit upright in space at times. Consequently, he doesn’t always absorb and bounce off of direct contact, and his balance can be negatively affected.

Among other things, Allgeier sometimes gets overzealous with his feet and wastes motion. He still needs to refine his skill set as a creator. He can also be stiff on occasion. His lateral suddenness derives as much from effort as physical ability. Finally, Allgeier can work better to sustain blocks as a pass blocker at times, although his demeanor is not an issue.

Allgeier likely won’t challenge for a top spot in the running back class, but he undoubtedly has Day 2 potential. He could go on to be a productive NFL running back if he winds up in the right situation. Allgeier has great size, long speed, contact balance, explosiveness in space, and initial vision behind the line. Plus, at the second level, he displays promising flashes of elusiveness and creation capacity.

Diluting Allgeier’s profile, however, is his limited creation ability behind the line when he encounters contact. Allgeier needs some space to gear up, diagnose holes, and attack space. We’ve seen this year, after BYU lost Brady Christensen and Tristen Hoge, that Allgeier’s efficiency has decreased. Nevertheless, he flashes with his raw traits. When his line gives him the space he needs, he’s a dangerous multi-level runner.

Although Allgeier’s frame suggests he could be a power-scheme running back, he likely fits best as a zone rusher. Space is important for him, but he works well with that space and has the tools to extend runs down the field. His receiving upside presents extra appeal.

College football has a way of emboldening talent, no matter where it comes from. In a way, that’s what happened with Zach Wilson in 2020. And not so quietly alongside Wilson, Allgeier found his footing as well.

At first, Allgeier wasn’t regarded as a future playmaker. The Fontana, California product was an unranked recruit in 2018. He didn’t have any scholarship offers at the Division IA level and chose to walk on with the BYU Cougars. It was a decision that came with a great deal of initial uncertainty. But soon, it would yield exciting results.

Allgeier began his BYU career as most begin. He only touched the ball 10 times as a true freshman and ended up redshirting. Working with BYU running backs coach Harvey Unga, Allgeier built himself up heading into 2019 and flashed as a redshirt freshman. In a limited sample size, the BYU RB logged 17 carries for 119 yards, as well as 3 receptions for 67 yards and a touchdown.

In January of 2020, Allgeier was officially put on scholarship — but his journey was far from complete. Allgeier proved the scholarship was worth the investment by dominating in a breakout 2020 campaign. Emerging as a bonafide playmaker, Allgeier accumulated 1,130 yards and 13 touchdowns on 150 carries. He averaged 7.5 yards per carry, also adding 174 receiving yards.

The running game — and in fact the BYU offense in general — hummed with Allgeier in the backfield. But without Wilson there beside him, questions remain in 2021. So far, Allgeier’s efficiency has noticeably decreased. His yards per carry has sunk to 4.5 through two games, and he hasn’t found the end zone at a high rate.

Nonetheless, there’s time for Allgeier to turn things around. And even amidst this lull, he’s shown that he has the talent to potentially be a featured runner at the next level. How he finishes the year will determine how soon Allgeier gets his NFL chance. But he’ll get that chance either way.