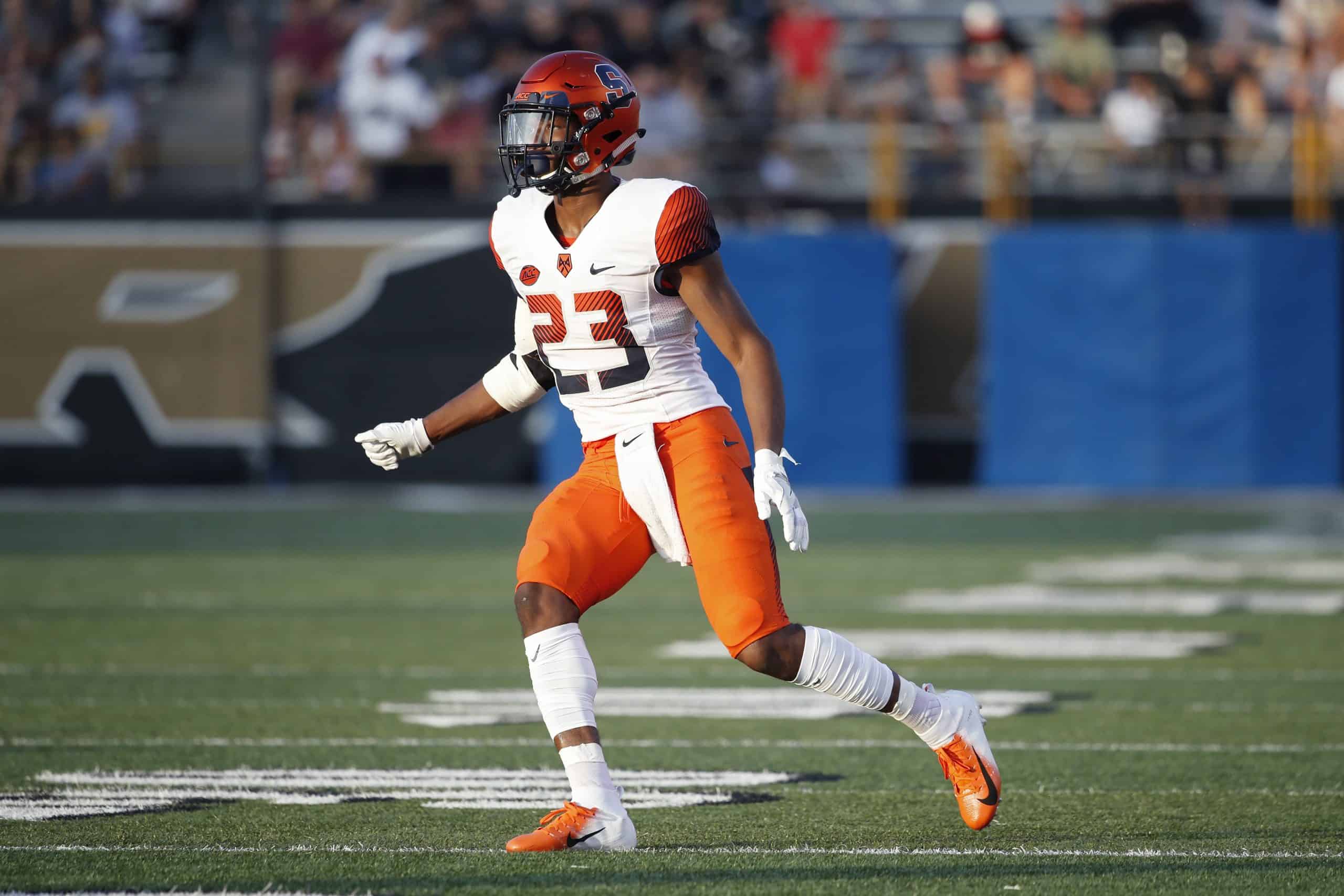 KALAMAZOO, MI - AUGUST 31: Ifeatu Melifonwu #23 of the Syracuse Orange in action during a game against the Western Michigan Broncos at Waldo Stadium on August 31, 2018 in Kalamazoo, Michigan. Syracuse won 55-42. (Photo by Joe Robbins/Getty Images)
What's in this article? Click to show
Safety Ifeatu Melifonwu’s toolsy tape
Melifonwu’s weaknesses contribute to his low floor
How high can Melifonwu go?

The “project” players are guys that are often lauded as low risk, high reward prospects in the middle rounds of the NFL Draft. Typically, they have elite physical tools that will draw teams to their upside. If they put it all together, these guys could be certified stars in the NFL. That could not be more true for Syracuse safety Ifeatu Melifonwu. While fellow Syracuse safety Andre Cisco gets all the hype, Melifonwu has his own growing fanbase. The physical tools he has are at the basis of his appeal as a prospect and player.

Melifonwu, the brother of former second-round pick Obi Melifonwu, an athletic freak, has very similar traits to his brother. However, he is used much differently and in a more versatile manner than his brother. Still, Melifonwu’s physical is the basis of his wide-scale impact that is felt on the Orange defense.

Let’s start with a basic coverage rep. Melifonwu does not even get targeted here, but he works an inside shade with about an eight-yard cushion in off-man coverage. The thing I love here is his eyes. Melifonwu reads the outside stem and squares his hips getting ready to turn and get vertical. However, he stays disciplined with his eyes to read the receiver breaking down.

Herein is where the physical tools arrive. Melifonwu is 6’3″ and about 200 pounds. To have this level of hip sink and fluidity is impressive. Melifonwu drops his hips and, in two steps, is exploding downhill. That is an excellent example of throttling down and exploding to the catch point. If this had been targeted towards Melifonwu, this would be a pass breakup waiting to happen because of his mirroring skills and physical ability.

This is a very nice rep in run support from Melifonwu. Especially against an athletic quarterback like Micale Cunningham, being the force edge and playing read option is not an easy task for any defensive back.

However, Melifonwu does a great job of riding the line and squeezing off the edge. That gives him the ability to make a play regardless of what happens. With his high-end athleticism and speed, Melifonwu goes step for step with Cunningham and makes the tackle at the line of scrimmage.

Much like his teammate Andre Cisco, Melifonwu has ball skills for days. Being 6’3″ with his length and fluidity in addition to having ball skills is what will attract teams. However, the more impressive thing here is the wherewithal to understand the situation. Melifonwu understands out of the bunch set that he can get picked off if he is not careful, and that will result in an easy touchdown.

Notice how he uses his eyes to scan the route concept but stay focused on the inside slot receiver. Once he realizes he is in the clear, it is time to drive on the route. Melifonwu reads the outside stem but stays disciplined until the receiver declares a direction with his hips. Melifonwu then plays in trail technique, plays the hip pocket on the far shoulder, and then jumps this for an interception. His speed allows him to throttle down to the catch point.

This is gorgeous by Melifonwu. He is innate ability to read the receiver’s hips with his eyes is elite. Melifonwu routinely can break on the ball with great timing, anticipation, discipline, and athleticism. He read through the hips that this was going to be a quick hitch and exploded downhill immediately to make contact at the catch point. His length allows him to get an arm in and dislodge the ball. This is another example of Melifonwu’s physical traits showcasing themselves.

If there was one place where a safety like Ifeatu Melifonwu needs to improve, it is his processing of the offense. Yes, he can process specific routes in man coverage, but his ability to diagnose a play through his keys is relatively raw. This is case and point, as Melifonwu gets sucked in by the wide zone action and motion, thus leaving the tight end wide open. As such, Melifonwu and the entire Orange defense give up a touchdown. It can not be placed solely on Melifonwu, but he has to key stuff like this at the next level.

How high can Melifonwu go?

The question will always be how high can Melifonwu’s stock goes. Physical traits are great, and if you have really great traits, they can make you a day-two pick. Guys like Kyle Dugger are perfect examples of where absurd measurables can get you draft stock wise. Melifonwu has similar traits but may project as an outside cornerback.

Melifonwu has a leg up in just about every physical department. Most “projects” are only drafted for their press coverage upside and length. Melifonwu has length, explosiveness, fluidity, and speed. On top of that, he is a playmaker with good ball skills. The traits are all there to propel him further up boards with a strong season.

To shoot his stock to the moon, though, Melifonwu will have to become a better all-around defensive back. That includes improving his processing, getting off his blocks better, adding more muscle to his lanky frame, and becoming more comfortable in zone coverage. Melifonwu is not pro-ready from an overall perspective, even if he is a solid man coverage cornerback already. Right now, he is a guy that likely goes early on day three, but that could certainly change with improvements in his Junior season.