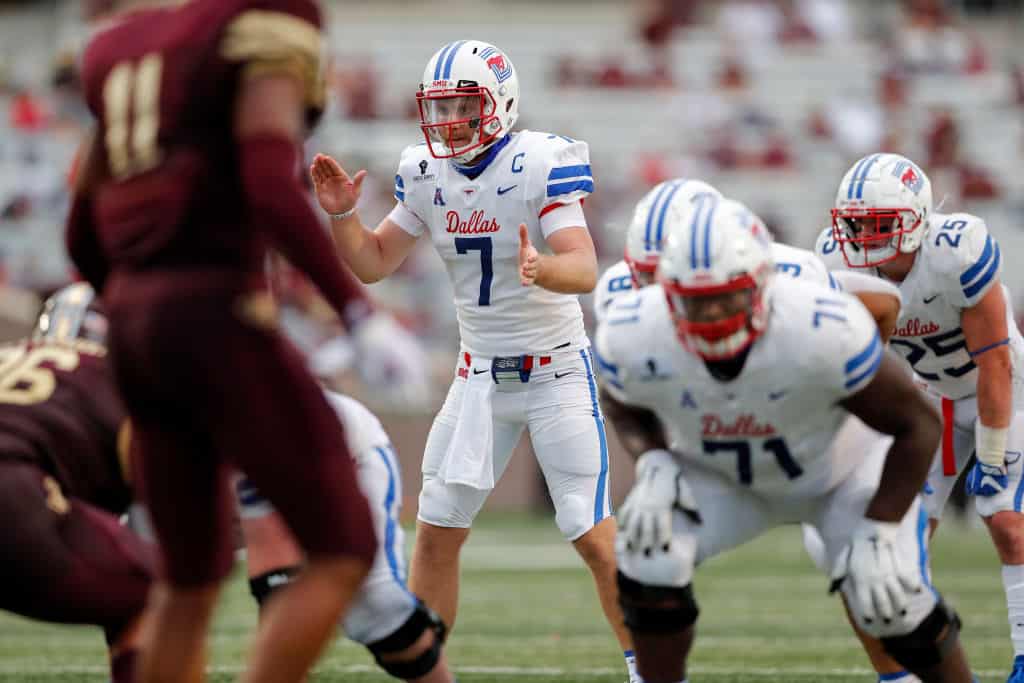 There are a ton of big-time names at the quarterback position throughout the college landscape playing in their senior seasons. Kyle Trask, Kellen Mond, Sam Ehlinger, and K.J Costello all get good run in NFL draft media circles. However, there is a chance that an American Athletic Conference transfer could be the best of them all as an NFL Draft prospect. The first batch of college tape hit the inbox, so I felt it necessary to do a little video breakdown of Shane Buechele vs. Texas State. It would be a fun start to see how the Texas transfer looked. What traits does he possess that are transferable to the next level?

This ball is 30 yards downfield from the far hash to the sideline, and this ball gets there with ease, despite not really driving through this pass with everything he has. His feet stay calm, and his base remains at a good width once he’s at the apex of his drop, not becoming too narrow or overextending.

From there, he displays some nice trunk rotation that allows him to generate velocity on the pass, but he’s careful not to open the left shoulder too quickly, which can negatively affect accuracy. These are the “NFL throws” people look for. But this is from a clean pocket.

This throw is even more impressive because it displays what he can do when he really uncorks a ball. Texas State is running what looks like a Tampa 2 coverage, where the defenses middle underneath defender runs down the pole to take the seams away. This is supposed to allow the safeties to remain wide in their deep half zones. But SMU runs a 4-verticals concept that spreads the zone past the limits.

Buechele does a nice job of holding the safety toward the middle before unloading a pass toward the sideline on a nice rope. This is the most beautiful throw in football. The vertical route hit behind a corner, gaining depth and a safety pushing to the sideline in Cover 2.

Full disclosure, quarterbacks falling away from throws like this where danger isn’t imminent isn’t something I’d like to defend. More bad things can happen as a passer falling away than if he’d slide right and step into the pass.

However, he does an outstanding job here of throwing this ball to a spot before the receiver had even made his break toward the front pylon. He does a nice job not drifting the receiver downfield to allow the safety to recover, instead opting to leave the pass toward the sideline and underneath. This natural arm talent from a weird platform displays his baseball background as a shortstop.

This is another time where his background playing shortstop shines. All he does here is turn a double play. All he has to do here is flick the ball out there because he so easily gets his elbow through the late clocking stage of the throw. He puts this pass in the only spot that he can to complete the pass, but the receiver is unable to finish the play.

Mental side vs. Texas State

The Mustangs went empty quite a few times throughout the course of the game, and the results were mixed for Buechele, but he did show some flashes. This read is clean and easy, but dealing with a free rusher barreling down on him complicates things drastically.

The Bobcats look to be in a triangle coverage of some sort pre-snap, but then the slot defender blitzes. Because Buechele’s initial read is to that side, he’s able to recognize this immediately and get his eyes to the safety replacing the slot’s responsibility, who’s driving hard to the flat. Once he sees that he knows with the corner hips open gaining depth, the slant will uncover, and he hits it as he takes a shot.

The bad (not that bad)

This 2nd-and-2 pass should have been made a lot easier. With the pressure in his face, he didn’t have to hold this and take a shot while throwing the curl route left. Take the easy completion on the hot route to the back flaring right.

This isn’t a horrible interception where he misread a coverage or threw a horrifically off-target pass. This is simply not using leverage to his advantage, and a slip by his receiver. Even with the slip, if this pass is leveraged away from the defender and toward the sideline, there’s a great chance the ball simply floats out of bounds and unharmed. But instead, the ball floats toward the inside and allows the cornerback to get both hands on the ball and secure the interception.

Buechele is a lot of fun. I think his pro prospects as a passer are better than that of the young man that replaced him at Texas, even if Ehlinger gave and still probably gives Texas a better chance of success at the college level. His arm isn’t outstanding, but it’s good enough.

If he continues to show improvements mentally, we could see a rise in perceived draft stock just as we did with Boise State’s Brett Rypien. Buechele is the type of player that could become a media darling that goes undrafted. But we’ll have to wait and see.